Trump Wants to Revolutionize the Military. Will Washington Let Him? 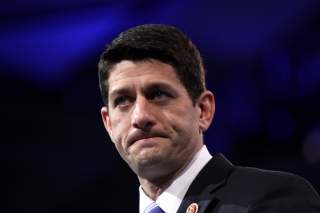 Defense contractors and defense hawks in Congress are downright giddy that Donald Trump pulled off an upset win in the presidential race—not so much because they agree with every single policy proposal that Trump and his team have released, but rather because Trump has been an avid supporter of increasing the size of the U.S. military, both in quantity and quality. Lockheed Martin Corp. saw its shares gain 6 percent after Trump’s victory, Raytheon’s went up by 7.5 percent, and Northrop Grumman’s stock prices increased by an additional 5.4 percent.

Companies like Lockheed and Raytheon have something to celebrate, at least insofar that Trump’s campaign rhetoric about a bigger, bolder, less fiscally restrained U.S. military correlates with what his actual defense policy will be once in office. On the campaign trail, Trump delivered several speeches that could just as well have been written by congressional defense hawks like Sen. John McCain, Rep, Mac Thornberry, and Rep. Mike Turner. Indeed, the talking points and policy plans that Trump offered in those speeches were essentially copied verbatim from lawmakers on the Senate and House Armed Services Committees who continue to make the case that the 2011 Budget Control Act and the automatic spending cuts known as the sequester are the most dire threats to the U.S. military today. Trump wasn’t especially specific with his plans, but he outlined a series of benchmarks that certainly made those members of Congress who are vehemently anti-sequester get closer and closer to popping the champagne; an influx of ninety thousand additional soldiers for the Army, seventy-five new ships for the Navy, a repeal of the sequester cuts that have been the law of the land for the last five years, and another eighty-seven fighter aircraft to the Air Force.

Explaining Trump’s intentions towards the military, Rudy Giuliani—one of his biggest fans and surrogates—put it this way: “He’s [Trump] going to be facing Putin with a country that is not diminishing its military but a country that is dramatically increasing it to Reagan-like levels.”

All is well in the defense world, right? Republicans now control the White House, the House of Representatives and the Senate for the first time in a decade, so surely we can all prepare for a repeal of the sequester?

Despite the better-than-expected results for Republicans during this year’s election cycle, the dynamics in Washington on budgets and spending aren’t likely to change all that much for two main reasons: the House Freedom Caucus is still alive and well, mostly surviving last week’s elections; and Democrats still have enough power in the Senate to filibuster whatever defense plans that Republicans want to push through.

If one needed any hint at how powerful the House Freedom Caucus is, one need look no further than earlier in the spring, when they blocked Speaker Paul Ryan and his allies in Republican leadership from passing a budget resolution. Not only was this a devastating setback for a man like Ryan, who thinks passing fiscally sustainable budgets is about the best thing you can as a lawmaker, but it also demonstrated once again that hard-right fiscal conservatives retain enough members in the larger GOP conference to block any additional federal spending (even defense spending) that is agnostic about the abysmal national debt. As Rep. Jim Jordan, the chairman of the Freedom Caucus, wrote at the time, “God forbid someone says no to some deficit spending in that town!” Why the Freedom Caucus would suddenly change its stripes and cuddle up to the Republican leadership on spending after this election is hard to fathom; the caucus is the definition of ideological stubbornness.

And even assuming that Freedom Caucus rolls over and accepts tens of billions of dollars in additional defense spending per year without debt reduction, the Senate Democratic caucus won’t simply roll over and allow it to pass. Since the 2013 Paul Ryan–Patty Murray budget resolution, Washington has operated with a one-to-one ratio on discretionary spending. In other words, for every dollar increase in defense spending, nondefense accounts will also be increased by a dollar. Senate Democrats consider this ratio the only way to ensure that priorities like education, infrastructure and Homeland Security functions are funded properly; last summer, Democrats filibustered an $18 billion increase in defense spending precisely because nondefense accounts weren’t afforded the same amount. Lest we forget, Senate Democrats actually picked up seats this cycle, so we can be sure that Sen. Chuck Schumer, the new Democratic leader in-waiting, will continue to use the power of the filibuster to ensure that the Departments of Education, the EPA and every other nondefense agency that Republicans despise will be given relief as well.

What defense contractors and defense hawks are hoping for is a big influx of money for the Pentagon. But what they are likely to get is the same old, budget-by-crisis, best-of-bad-options scenario, where Republican and Democratic leadership sit down and negotiate one- or two-year packages of sequester relief with equal spending for defense and nondefense. Donald Trump will meet his match with the sequester.