Trump Was Right to Terminate the Iran Deal 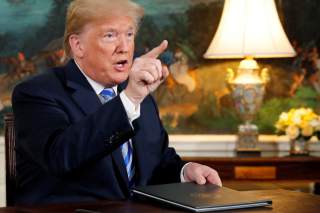 The deal was a well-intentioned effort by the Obama administration to limit Iran’s nuclear program—including its nuclear weapons program. But from the beginning, there were a number of reasonable concerns about the JCPOA.

How About That Sunset?

The fact is that Tehran didn’t sign up to limit its nuclear-power (or weapons) program forever, but rather for just a period before being unbridled from the JCPOA.  The JCPOA essentially kicks the can down the road to the next president after Trump.

Iran needs to sign up to limiting its nuclear activities in perpetuity.

Despite early calls for it to do so, the JCPOA doesn’t fully address Iran’s ballistic-missile program. Ballistic missiles are a common delivery system for weapons of mass destruction, especially nuclear weapons.

Since Iran lacks a highly capable global—or regional—Navy or Air Force, Tehran would have to rely on its ballistic-missile arsenal to deliver nuclear weapons against any of its self-perceived enemies, including the United States.

The concerns over Iran’s missile program is evident in UN Security Council Resolutions 1929 and 2231, which attempt to limit Iran’s activities involving nuclear-capable ballistic missiles. Tehran has been accused of violating both resolutions.

Restrictions on ballistic missiles must be part of any new, comprehensive agreement.

Another troubling aspect of the JCPOA is that the United Nations’ International Atomic Energy Agency (IAEA) inspectors aren’t allowed to check Iranian military sites.  This is beyond comprehension.

Since nations would likely—even probably—develop nuclear weapons within the context of a military program, it is only reasonable to expect that inspectors would be able to visit military sites where illicit nuclear activities may be taking place.

Verification of compliance is essential. Iran historically hasn’t been fully forthcoming on its nuclear activities, including its weapons program—a fact recently buttressed by revelations uncovered by Israeli intelligence operations. Tehran may still be hiding unauthorized activities beyond the inspectors’ purview.

Comprehensive, no-notice inspections need to be part of any future agreement.

But Iran has become more fully integrated into the international economy with the lifting of punitive economic sanctions under the JCPOA. This has provided it with revenue streams that are helping fund its aggressive adventurism in the region.

Iran is supporting the ruthless regime in Syria in the bloody civil war there. Tehran is also aiding the Houthis rebels in Yemen, allowing them to indiscriminately rain missiles down on Saudi Arabia.

Iran, of course, is an active state sponsor of terrorism, supporting the likes of Hezbollah and Hamas, according to the U.S. government.  In Afghanistan, it’s supporting some elements of the Taliban, continuing to destabilize the long, war-torn country.

Despite the American withdrawal from the JCPOA, there is still time for diplomacy while the U.S. economic sanctions—that will go after a broad range of Iranian economic activities—are reimposed.

While a parade of European leaders made their way recently to Washington to preserve the JCPOA, these same senior officials could now engage in the diplomatic heavy lifting of getting new negotiations started, especially considering their less-hostile relations with Iran.

President Trump made the right call. For the sake of American and international security and interests, a new nuclear deal is needed—one that addresses, at a minimum, the glaring flaws in the current JCPOA.

The first step toward a new agreement is the recent U.S. withdrawal from the nuclear deal. The next thoughtful step is for Iran to willingly come back to the table to tackle these fundamental and reasonable concerns.

Image: U.S. President Donald Trump speaks to reporters after signing a proclamation declaring his intention to withdraw from the JCPOA Iran nuclear agreement in the Diplomatic Room at the White House in Washington, U.S. May 8, 2018. REUTERS/Jonathan Ernst