Trump Will Face a Cornucopia of Global Threats 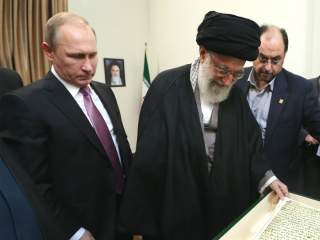 IN 2017, the global environment is more dangerous than at any time since the end of World War II and is beset by numerous unfolding regional and global crises. Several countries seek to overturn the existing international order; no major power, except for the United States, appears to be seriously committed to its maintenance.

Instead of facing a single foreign-policy problem, President-elect Donald Trump will be confronted with an unprecedented array of diverse international challenges. These include: North Korea’s erratic leader Kim Jong-un and his nuclear saber rattling; an irredentist and reckless Russia that has annexed Crimea, is committing war crimes whilst waging war in eastern Ukraine and Syria, and seems poised to engage in further acts of aggression against neighboring countries; a Europe that is afflicted by the refugee crisis and continued economic and political malaise; a China that is engaged in a campaign of intimidation against its neighbors, is assertively pressing maritime claims and seeking to reduce, and eventually exclude, American influence from Asia; Iran’s efforts to dominate the Middle East and the rising tide of Sunni-Shia strife and destabilization in the region; and the jihadi terrorist threat.

The United States now is neither feared nor respected. Its enemies have been emboldened and are working together; the Moscow-Beijing-Tehran axis is the most significant example. They seek not just to inflict a series of humiliating defeats on the United States, but also to discredit the entire American approach to global and domestic governance. And, unfortunately, they have attained some success in these efforts.

America’s friends feel neglected, marginalized and alienated; its alliances have been weakened. Having repeatedly drawn “lines in the sand” and having repeatedly retreated from them, America’s credibility has been greatly damaged and its global influence diminished. The Obama administration’s flirtation with a no-first-use nuclear-weapons policy has been particularly damaging in undermining extended-deterrence guarantees.

The president-elect is also faced with a major decline in domestic support for an assertive foreign policy. While there has always been an isolationist streak in the American body politic, a major portion of the electorate now questions the value of U.S. global leadership. Many Americans have also turned sharply against free trade, which has been a major component of American postwar global strategy. Many disdain U.S. alliances and global institutions as irrelevant at best and dangerous at worst.

While these challenges are daunting, they can be managed. The United States remains the world’s strongest economic and military power, with a tremendous capacity for rejuvenation. The American people remain intensely curious about the world, idealistic and, with appropriate encouragement, willing to embrace an engaged foreign policy. America’s foes are plagued by numerous domestic problems, such as an acute legitimacy deficit, that can be exploited by an adroit foreign policy.

Accordingly, there are a number of steps that need to be taken. First, the new president must put forth a strategy that clearly lays out the fundamentals of U.S. foreign policy and elaborates why vital national interests require American global leadership. Second, the United States must lead internationally and engage both allies and friends and deter foes. Toward this end, the president must pledge to honor treaty commitments. Given finite domestic resources, burden sharing and alliance management are essential. Third, America should commit itself to maintaining a stable and rule-based international order. Our core values and moral narrative must be neither forsaken nor imposed. Fourth, recognizing that a strong domestic economy and defense are key to America’s power globally, President-elect Trump should concentrate heavily on both.

Some have spoken of the twenty-first century as the next “American Century.” There is no reason why this cannot be the case.

Paula J. Dobriansky, a former under secretary of state for global affairs (2001–09), is a senior fellow in the “Future of Diplomacy Project” at Harvard University’s Belfer Center for Science and International Affairs.