Trump Will Make Good On His Promise to Keep the Country Free, Safe and Prosperous 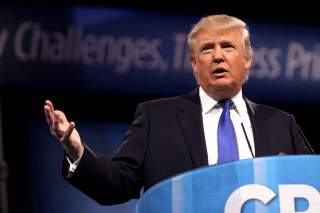 I’ve advocated for not paying too much attention to Trump’s rhetoric, so it was odd to be asked to analyze the president’s speech to the joint session of Congress.

Words do matter. But decoding Trump can be difficult. He means what he says, but often even well-meaning advocates are confused about what he means.

What’s more, when it comes to strategic leadership, activities matter more than rhetoric. Still, it’s worth looking into this early-in-term speech, because we actually have presidential actions to help us understand it.

Last night’s address does tell us something interesting. Apparently, the president wants his words to match his deeds.

Here are five top examples of where Trump’s speech put into words what the president is trying to put into practice.

“My job is not to represent the world. My job is to represent the United States of America. But we know that America is better off, when there is less conflict — not more.” Those words may have surprised some, but Trump’s cry to put “America First” was never an argument for isolationism or abandoning allies. Rather, it was an affirmation that the president’s task is to protect the country’s vital interests. That’s good news for America’s friends and allies. They are on our side because they—and we—recognize that we have common interests worth protecting.

There is plenty of evidence that the president is pursuing this course. Just look at his top-tier appointments to the foreign-policy and national-security team. Pence, Mattis, Tillerson, Kelly, Sessions, Haley, Pompeo and McMaster are all world-class professionals who understand the role of American leadership in protecting America’s interests. These appointments suggest that Trump’s foreign and national-security policy will be decidedly mainstream, in many ways more conventional than that of Bush or Obama.

“We strongly support NATO, an alliance forged through the bonds of two World Wars that dethroned fascism, and a Cold War that defeated communism,” Trump affirmed. My colleague at Heritage, Dan Kochis, observed:

As Trump highlighted, NATO is the very bedrock of a trans-Atlantic security. A peaceful, stable Europe has led to economic, cultural, and military dividends that have and continue to serve U.S. national interests. Many of our closest friends and allies reside there. The United States is right to continue to play an active leadership role within NATO.

That message matches what other top administration leaders, including the vice president, told European leaders at the recent Munich Security Conference.

3. Be prepared to fight the next threat.

The president reaffirmed that “it is not compassionate, but reckless, to allow uncontrolled entry from places where proper vetting cannot occur.” That statement reaffirmed his commitment to put tight controls on travel from several Middle Eastern countries. The sole purpose of this initiative is to deal with a serious emerging threat: the future outflow of foreign fighters leaving the conflict in Iraq and Syria. We really do need to block them from coming here.

4. Control our borders and enforce our laws.

Trump declared: “My administration has answered the pleas of the American people for immigration enforcement and border security.” Here, Trump is definitely doing what he says. The administration has already issued a blitzkrieg of orders to get this done. Restoring credibility to border security and U.S. immigration laws and taking down the international criminal cartels, not granting amnesty, are the first and most important steps for fixing the mess we are in.

“I am sending the Congress a budget that rebuilds the military, eliminates the defense sequester and calls for one of the largest increases in national defense spending in American history,” Trump declared. Action here is sorely needed. The state of America’s military is marginal.

Only days before this speech, President Trump’s budget director, Mick Mulvaney, announced that the administration planned to seek a defense budget of $603 billion for 2018. That’s $54 billion above the cap set in Budget Control Act caps for fiscal year 2018. (The proposal also calls for cutting $54 billion elsewhere to keep total discretionary spending within BCA limits.)

The reality is that even this 10 percent bump-up is not enough, but the administration must be given credit for looking for an on-ramp to fixing defense in year one and doing it in a way that gets past the limitations of sequester without growing debt.

Frankly, I don’t know how much bigger a number an administration could realistically achieve just by cutting into other discretionary spending. If Trump delivers this, it will be an accomplishment. The other virtue of going after discretionary spending is it will allow the administration to stop funding a lot of stuff the government shouldn’t be doing. Also, this breaks President Obama’s fiscally pernicious “one-for you, one-for-me” doctrine: that if Congress wanted to add a dollar to defense, then it also had to add a dollar to nondefense spending.

Last night’s speech helped clarify one important point: Trump’s deeds match his words. Those individuals who are unhappy with his presidency, who want to continue to argue that Trump really governs like his caricature on Saturday Night Live, now look much less credible. They need to start acknowledging that they dislike Trump not because he can’t govern, but because they don’t like his ideas for keeping the country free, safe and prosperous.