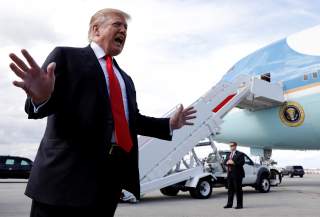 Can there be a cover-up if there’s no crime to hide? That was the question Attorney General William Barr and Deputy Attorney General Rod Rosenstein had to answer this weekend after receiving the special counsel’s report. And they reached the only conclusion they could reach consistent with the principles of federal prosecution and the facts presented by Robert Mueller’s inquiry: Donald Trump is exonerated on all counts in the two-year-long investigation into Russian interference in the 2016 elections.

Mueller himself exonerated Trump and his campaign of “collusion” with Russia to influence the election. On the question of obstruction, he presented evidence and arguments for both sides without drawing a conclusion. Barr and Rosenstein found—as Barr wrote to Congress Sunday—that “the report identifies no actions that, in our judgment, constitute obstructive conduct, had a nexus to a pending or contemplated proceeding, and were done with corrupt intent, each of which, under the [Justice] Department’s principles of federal prosecution guiding charging decisions, would need to be proven beyond a reasonable doubt to establish an obstruction-of-justice offense.”

Barr and Rosenstein came to this conclusion “without regard to ... the constitutional considerations that surround the indictment and criminal prosecution of a sitting president.” By the ordinary standards of the Justice Department, President Trump is innocent.

This comes as a shock to many in the media and the president’s enemies left of center, but it’s worth noting that Mueller’s investigation is not the only one to come up empty. From the time Trump won the election, a hostile press has, by and large, assumed that he did so with Russian connivance and has dedicated enormous resources to proving it—without success. Instead of proving a case, Trump’s critics have promoted a narrative of insinuation, in which scattered facts and raw innuendo are assembled into a highly suggestive, but not actually true, picture. Trump wanted to build a tower in Moscow. The campaign manager he brought on to handle the Republican convention, Paul Manafort, was a shady character involved in Ukrainian politics. Various Trump officials met with the occasional Russian, or a notable Russian was in the room at a campaign-related event. Trump and his campaign were keenly interested in what Russian hackers had stolen from accounts belonging to Hillary Clinton and her campaign. And the list goes on.

Far from indicating collusion, however, the haphazard contacts between Trump campaign personnel and Russians suggested the opposite: the Trump people had no idea what the Russians had or what they were going to do. But as long as the Mueller investigation was open, those who were motivated to believe that there was a conspiracy between Trump and Vladimir Putin could still imagine that the missing proof would be found. Now Mueller’s report is in, and the conspiracy theorists have been dealt a psychological blow. They appear to be suffering from several stages of grief at once: denial, certainly; anger; bargaining (maybe that equivocal reasoning about obstruction in the report really means Trump is guilty, guilty, guilty); depression; and maybe at the margins a little acceptance.

The grand narrative was weak from the beginning. All the circumstantial evidence of the Justice Department’s and FBI’s actions suggested that there was no serious suspicion that the president was in cahoots with Russia. Review the sequence of events leading to Mueller’s appointment: then-FBI director James Comey tells the newly elected President Trump that an investigation into Russian interference is underway. Comey tells Trump that he is not under investigation. Trump pressures Comey to make a public statement to that effect. Innuendo in the press is running wild—the narrative is already dragging the administration down, and Trump is not the kind of executive who takes a passive approach to media or expects passivity and patience from his employees when he’s attacked. He fires Comey. Only then does Rod Rosenstein appoint Robert Mueller as special counsel, charged to investigate Russian interference, possible collusion, and whether President Trump’s actions constituted obstruction of justice.

Trump was guilty of behaving in ways that violated the “norms” of the bureaucracy: the FBI director expects a certain amount of respect and deference to protocol from the president. He doesn’t expect to be fired so easily. Mueller himself is a former FBI director, and Trump’s transgressions against the honor of the bureau’s highest office might seem like something he would want to punish, even if the facts to support a high-pressure two-year inquiry are meager. If there had ever been a real possibility that Trump himself was criminally connected to Russia, however, Comey would have behaved differently from the start, and it wouldn’t have taken his firing to get a special counsel appointed.

Washington got its revenge on Donald Trump, even if the president’s opponents didn’t get what they wanted (but had no reason to expect—like a kid asking Santa for a pony at Christmas). The Mueller investigation had nothing more to commend it than Comey’s original investigation did, but the spectacle of a special counsel’s appointment and the space it opened for speculation about what it might uncover taught Trump—and more importantly, any other potentially defiant politician who was watching—just how high the price would be for failing to observe proper protocol toward a successor to J. Edgar Hoover.