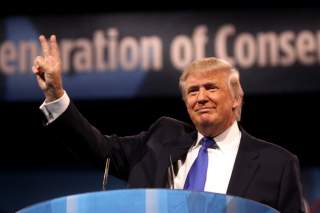 Last night was supposed to usher in a new era of Democratic dominance in Washington, D.C. You had Hillary Clinton, the most knowledgeable and experienced foreign policy bureaucrat to seek the White House since George H.W. Bush, going against a candidate in Donald Trump who never held elected office, never demonstrated a mastery of the policy issues, and could never stop himself from putting his foot in his mouth. 2016 was also projected to be the year when the Republicans lost their majority in the Senate; the math, with the GOP defending 24 seats to the Democrats' ten, wasn't the party's friend.

Instead of the romp that the Democrats hoped and planned for, the party endured a staggering defeat that was as humiliating as it was shocking. Trump's appeal to the working white class in states that have been solidly in Democratic hands for a generation (Michigan, Wisconsin, Pennsylvania) took the function of an anvil crashing through the Blue Wall that provided Democratic presidential candidates will a solid head-start in the Electoral College. With those Rust Belt States lost, the Clinton campaign could no longer operate with any amount of breathing space. Reaching 270 electoral votes became a much steeper climb without the Midwest, a region that the Clinton team appeared to take for granted.

Wisconsin hasn't gone for a Republican presidential nominee since Ronald Reagan in 1984, but Trump drew enough enthusiastic white voters to overcome a deep deficiency in African American and college-educated whites in the metro areas. Ditto in Pennsylvania: combined with Clinton's lower turnout in Philadelphia compared to President Obama in 2012, and add Trump's strong turnout in the rural, red counties into the question, and you're left with a state that hasn't been red in 28 years going back to the Republicans.

Donald Trump is perhaps the most divisive figure ever in American politics. His language is often incendiary, and he has a knack for making racially-tinged comments that serve as a dog-whistle to his core supporters. But he won fair and square last night, and it's safe to say that Trump likely doesn't have any issues with the voting process he has derisively labeled as "rigged."

Now that the election is over, Trump must change his tune and act like the statesman that he insists he's capable of being. The country is more divided politically, ideologically, racially, and economically than it has been in a long time. African-Americans, Hispanics, and Asians largely revile Trump as an individual, view him as a demagogue, or are significantly worried that a Trump administration will drag America back to the 1950's. Exit polls from CNN registered Trump's support among blacks at a dismal 8% and Hispanics at 29%. He must find a way to prove to these demographic groups that he will be a president for all Americans, regardless of wealth, social status, or ethnic background.

Whether Trump admits it or not, he won this election in large part by following a divide-and-conquer strategy. He spoke in terms that working class whites in the rural counties of Ohio, Nevada, and Florida understand, and he carried the burdens of this group into his shoulders throughout the eighteen month campaign and made their problems his problems. Yet in doing so, he also alienated other groups in the country to the point where a vast majority in America's minority communities describe feelings of fright when asked to imagine a Donald Trump presidency.  It's tough to be a Commander-in-Chief and ask Americans to trust you if you also happen to scare the very same demographic groups that are composing larger shares of the population.

As a candidate for president, Trump was the mean, no-nonsense, blue-collar billionaire who took no prisoners, fought any one who crossed him, and who exhibited a degree of narcissism that would make the smartest psychologist feel uncomfortable. As the 45th President of the United States, Trump needs to ditch the act and make a genuine effort to heal the country - assuming the country hasn't passed the point of no return.