Trump Is Your Yeltsin 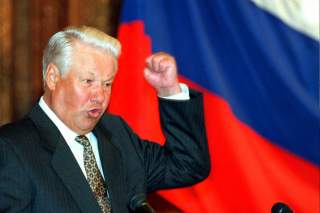 Over the past week, we have seen the tensions between former US intelligence and security officials and President Trump erupt to an unprecedented level. Trump revoked former CIA Director John Brennan’s security clearance and threatened more. The former head of the military’s Special Operations Command, retired Adm. William McRaven, reacted by declaring, “I would consider it an honor if you revoked my security clearance as well.”

Much of this conflict stems from President Trump’s dismissal of intelligence community warnings about the actions and threats from Russia. It’s clear how the former heads of the U.S. intelligence community assess President Trump, but how do Russian security elites assess our president? The answer is important for American officials as they respond to President Trump’s tasking out of the July summit to reengage their Russian counterparts. Do Russian security elites see Trump as the man who can save U.S.-Russian relations? Do they see him as a threat? Or, is Trump something else to them?

“Trump is your Yeltsin,” a former senior FSB officer told me in Moscow this summer. “Yeltsin swept away everything that came before. And then he invited in the Americans. You Americans will have to find a way to deal with Trump as we had to deal with Yeltsin.”

With his pithy analogy, the KGB/FSB veteran who served at the highest levels under former Russian president Boris Yeltsin in the 1990s, spoke volumes about how he, the Russian security elites, and security elite member number one, Vladimir Putin, view the Trump presidency.

The last Soviet leader, Mikhail Gorbachev, normally gets the credit (or blame) for the fall of the Soviet Union in 1991. But Russian intelligence and defense elites also understand that it was, in fact, Boris Yeltsin who separated the Russian Republic from the other Soviet Socialist Republics in the USSR and actually ended the Union. Boris Yeltsin ruled the newly formed Russian Federation throughout the 1990s, overseeing a transition that, although it brought more democracy, also ushered in a decade of troubles for Russia: political and economic corruption, incompetent governance, military decay, a savage war in Russia’s Caucasus, disastrous inflation, and more. The flamboyant and charismatic Yeltsin, who was brilliant in the face of two conservative coups, showed himself incapable of the day to day focus necessary to bring Russia through its transition. Yeltsin’s penchant for firing subordinates as a leadership tool created instability in his administrations. His drunkenness and ineptitude on both the national and international scenes made his presidency an embarrassment to officials—especially in the intelligence and defense establishments. Having failed twice through coups to reverse or slow the course of events, conservative forces in Russia finally took a different path. In 1999, on the eve of the new millennium, conservatives “persuaded” Yeltsin to turn over control to his young prime minister, one of their own, former KGB officer, Vladimir Putin.

In the eyes of the retired FSB officer who spoke with me, President Trump has caused a similar disruption in American politics and government. Trump has swept aside old ways of governance and circumvented traditional centers of power in the American political system. He has alienated establishment leaders across the board—especially in the intelligence and defense elites. He is a flamboyant leader who seems not to care that his persona violates some long-time standards of behavior. Trump’s courtship of Russia and the consternation it provokes in the US intelligence and security establishments, reminds my Russian colleague of similar frictions during Yeltsin’s tenure. The public hostility by many former US security officials toward Trump mirrors the less public but equally strong sentiments Russian security elites had toward Yeltsin. To say Trump is our Yeltsin is not a compliment. It is an expression of disrespect and dismissiveness.

In 2005, five years after taking over from Yeltsin, Vladimir Putin told the world that the fall of the Soviet Union was, “the greatest geopolitical catastrophe of the 20th century.” For Putin and others in the intelligence and defense elite, it was a coming out moment; a public statement that what Yeltsin had chosen was not going to be the path for Russia. Changes were under way to correct the course.

There are many differences between President Boris Yeltsin and President Donald Trump and, American observers would undoubtedly choose a different historical analogy for Trump. But, for U.S. administration officials planning to carry out our president’s post–summit guidance to reengage their Russian counterparts, it is important to appreciate how the Russians see America’s situation.

Russian security elites do not respect President Trump. Quite the opposite, those security elites see Trump as a liability for America, which they must exploit while they can, because, based on their own experience, they fully expect American conservative forces to replace Trump as soon as possible. Their assessment of our president influences the risks they are willing to take advancing Russian national interests in the face of American objections. Admiral McRaven, the architect of the bin Laden raid, wrote in an open letter to Trump, “[You have] embarrassed us in the eyes of our children, humiliated us on the world stage.” For once the U.S. and Russian security elites are in agreement.

Brigadier General (retired) Kevin Ryan is an associate fellow at Harvard Kennedy School’s Belfer Center for Science and International Affairs. He is the founder of the U.S.-Russia Elbe Group and is a former U.S. Defense Attaché to Russia.

Image: Russian President Boris Yeltsin gestures as he speaks in Moscow in this September 1995 file photo. Yeltsin has died, a spokeswoman for the Kremlin said on April 23, 2007. REUTERS/Stringer (RUSSIA)