Trumpist Populism Mounts a Ferocious Comeback with the Immigration Debate 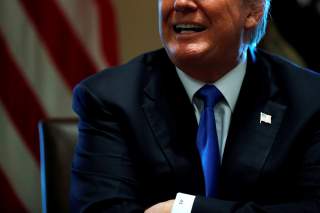 “The very issue that we are looking at is: how does a nation select who is admitted in its borders?” a senior administration official told reporters Tuesday. “We have seen countries—across the globe—that have opted to move to a system that promotes their own national interest.”

“I don’t know that we can generalize the manner of admission or entry of all our forefathers into the United States,” the senior administration official added. “We’re not in the place as a country that we were 100 years ago, 150 years ago, 200 years ago.”

Still less than a year into the Trump administration, for reporters who covered matters of immigration issues this time last January, the shift from administration to administration couldn’t be starker. Though some critics point out that former president Barack Obama oversaw the deportations of millions, a move Donald Trump has said he is open to doing, as well, the changes in emphasis between the two teams is stark. Obama led off his 2014 address to the nation on immigration by saying: “For more than 200 years, our tradition of welcoming immigrants from around the world has given us a tremendous advantage over other nations.”

But today, administration officials repeatedly emphasized the need for immigrants to “speak English,” “have a job,” comport with “our way of life” and “love this country”: the administration decried the matriculation of immigrants who arrived in the States only by “sheer luck.” For the Trump White House, the status quo represents “an unacceptable standard.”

The administration repeatedly emphasized the danger some immigrants pose, noting that government research shows that tens of thousands have “committed egregious public safety offenses within the United States” and yet these individuals “have the gall to apply for immigration benefits.” Said a senior administration official: “Quite frankly, in our view, it is only really the tip of the iceberg.” Also namechecked were “honor killings” and “female genital mutilation,” primitive practices still in use in parts of the world.

Such a tone is music to the ears of those on President Trump’s restrictionist flank, who only a week ago were reeling from dual setbacks—the ouster of Steve Bannon from Breitbart News and Trump’s public indication to Sen. Dianne Feinstein that he was willing to consider signing off on DACA, with no preconditions. Jacob Heilbrunn wrote: “With the demise of Bannon, a new Trump, shorn of the influence of the populist wing and more receptive to the establishment wing of the GOP, may be emerging.” But reactions to the Feinstein comment and the subsequent furor on the Right—led by keynote Fox News host Tucker Carlson and influential conservative author Ann Coulter—seemingly startled the White House. By late week, the cards were back in the restrictionists’ favor, with Carlson and Coulter both gleefully defending Trump’s “s--thole” moniker for troubled countries.

The pressure from the Right is unlikely to let up. “I want them to come in from everywhere,” President Trump said Tuesday at the White House, backtracking slightly, and attempting to stem the continuing fallout from his controversial remark, which he officially denies having said. Also Tuesday, Secretary Kirstjen Nielsen, a protegee of Chief of Staff John Kelly, was lacerated on Capitol Hill Tuesday for the president’s language.

Restrictionists aren’t fully sure what to make of Kelly. As I reported last year, his experience heading up U.S. Southern Command—as well as his belief that several Latin American countries could collapse in the coming years—infuses his politics. On the other hand, some hardliners complain that he is funneling moderates, like Nielsen, into the administration, and restricting access to a president, who left more to his own devices, would instinctively side with restrictionists.

Kris Kobach, the hardliner Kansas Secretary of State (and passed-over candidate for U.S. Attorney General and DHS chief), warned Breitbart Monday evening of the dangers of most any White House deal with the Democrats on DACA, despite the fact that failure to do so could shut down the government. “There will be a surge, it is guaranteed,” Kobach, a populist candidate for Kansas governor, said. “If there is a DACA amnesty, there will be a massive surge of hundreds of thousands, if not more than a million, new illegal aliens.… What happens when you grant amnesty is immediately people flood across the border because they want to falsely claim that they were already here and get the new amnesty or they want to at least get here and wait for the next amnesty.” Coulter said Tuesday that Trump should speak with Kobach by phone.

The looming question is whether the immigration debate will finally illuminate decisively that the Trump phenomenon is about more than Donald Trump, celebrity businessman. Scott Greer at The Daily Caller declares: “Trumpism Will Survive Without Bannon,” pointing out rising stars on the populist Right (like Kobach); Greer namechecks Rep. Lou Barletta, a candidate for the Senate in Pennsylvania. Barletta gained moderate national attention last decade as the hardline mayor of Hazleton, Pennsylvania. Hazleton-area political writer Charles McElwee tells me Barletta “had a singular focus on immigration issues long before anyone really paid serious attention to it.” Says McElwee: back in 2006 (when George W. Bush attempted comprehensive immigration reform), Barletta and television host Lou Dobbs, now generally a steadfast Trump ally, led the charge against capitulation. Other names percolate. Ian Mason of Breitbart cheers Sen. Tom Cotton: “This guy. This guy right here.” And The New Yorker asks: “Is Tom Cotton the Future of Trumpism?” For now, the jury is out.