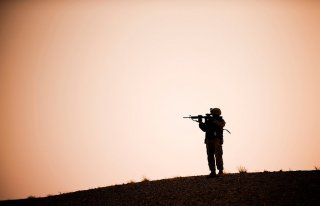 The recent detonation of the GBU-43/B Massive Ordnance Air Blast to dislodge the Islamic State’s caves and tunnels in eastern Afghanistan did not change the reality of the lost opportunities, mistakes and wild pitches the United States has witnessed in the country since 2001, but it did make a difference. The strike was indeed the “right munition for the right target” and a tactical military success, but it was also a hopeless reminder of America’s unfinished war in Afghanistan. While the strike introduced a new symbol to fighting the Afghan war, it also suggested a search for a new and realistic Afghan war strategy.

As the Trump administration reviews its Afghan policy, it is imperative to recognize that Afghanistan’s stability remains inescapably linked to two fundamental factors: peace with Pakistan and peace with the Taliban. Unfortunately, the solutions to both pieces are intertwined and revolve principally around Pakistan, a poster child for proxy and terrorist groups in the region.

Since 2001, Pakistan has received over $30 billion in generous U.S. military and civilian assistance—second only to Israel—but these inducements have done little to persuade Islamabad to abandon its lethal support to the Taliban and other terrorist groups. Instead, Pakistan has continually frustrated the U.S. war efforts in Afghanistan, and its proxies have claimed the lives of almost 2,400 American military and civilians and countless Afghans. Pakistan rationalizes its use of proxy groups because they are expendable and low-cost compared to deploying conventional forces and it provides Islamabad a plausible deniability. More important is that Washington has struggled with clarifying whether Pakistan is a friend or a foe. The broader spectrum of America’s relationship with other countries can be summed up in four categories: friends and allies, friendly rivals, unfriendly adversaries and enemies. That said, Pakistan arguably falls somewhere between a friendly rival and an unfriendly adversary. In this, Trump was correct to call Pakistan “some U.S. ally” after the U.S. Navy Seals killed Osama bin Laden in his compound only steps away from Pakistan’s military academy.

U.S. officials and commanders openly acknowledge that terrorist outfits, including the Taliban, enjoy safe havens, recruitment and training camps, and financial networks inside Pakistan. These groups publicly hold fundraising events in major Pakistani cities and are facilitated by Pakistani political parties. This unceasing support to the Taliban has increasingly transformed the group from a ragtag hit-and-run movement into a more conventional force. For example, Taliban fighters now operate advanced weaponry, including surveillance drones, sniper weapons, night-vision goggles and communication equipment. The group run a strong informants network for intelligence gathering and actively use social media, all while impressively maintaining operational security. The Taliban has stepped up its sabotage activities through conducting coordinated raids, including the recent attack on the Afghan army base in Balkh Province that killed over 130 Afghan forces, taking over key Afghan districts to undermine Afghan government, and exploiting disgruntled Afghan soldiers to infiltrate and kill Afghan forces. Moreover, now, by virtue of their closer ties with Russia and Iran, the Taliban are receiving critical intelligence and material support, which in effect legitimizes the group’s belligerence.

Against this backdrop, U.S. policy approach towards Pakistan remains largely ambiguous, even though U.S. commanders have repeatedly called for a “holistic review” of the U.S. relationship with Pakistan. Unfortunately, Washington’s current approach towards Pakistan is one best characterized as benign neglect—ignoring Pakistan’s duplicity and not holding it accountable for its transgressions—that has produced little tangible results. Going forward, Washington should consider testing an alternative approach: a policy of realpolitik. The Trump administration should create new pressure points under its new policy line, by raising the cost and the pain level for Pakistan to support terrorist groups. By doing so, Washington could impose targeted financial sanctions and travel restrictions on senior Pakistani army and intelligence officials with known ties to terrorist groups, and target financial networks and banks that are being used as a laundering scheme by Pakistan’s military to sustain its support for the militants. Washington’s objectives in Afghanistan could not be furthered unless Washington uses its leverage points— more sticks and fewer carrots—including placing strict conditions on future U.S. military assistance to Pakistan. The broader scope of Washington’s strategy should also make clear at what point does Pakistan overreach in its transgressions. To be sure, Trump should not be deceived by the initial signs of a change of direction from Pakistan until Islamabad shows real results.

The United States should also take one other action: establish a trilateral dialogue with Islamabad and Kabul with a focus on peace talks with the Taliban and enlist the United Nations as a third-party interlocutor. There has been a great deal of secrecy around the talks with the Taliban, none of which have produced measurable results. Nobody precisely knows who is who in the new Taliban movement after infighting fragmented the group, which Taliban groups are reconcilable and which are not, how much authority Taliban leaders carry, and whether those leaders can, in fact, make decisions on behalf of the insurgency. Meanwhile, no Taliban group seems to have the authority or the freedom to negotiate with the Afghan government unless Pakistan sanctions them, and there is no guarantee Pakistan will genuinely cooperate unless its insecurities, however unfounded, are mitigated. Engaging the UN would not only give the talks an international face and legitimacy but would also make it clear to the world the true nature of the problems and obstacles to stability in Afghanistan.

Nonetheless, the Afghan war has become a perennial conflict in which Pakistan is a principal actor. No one person has all the answers to the Afghan problem, but the key to Trump’s success in Afghanistan would be his grasp of the big picture—that Afghan stability is inseparably tied to Pakistan’s behavior. Fortunately, there is still time to win in Afghanistan, but it would not happen unless Washington turns its attention to deal with Pakistan front and center and put forth carefully crafted win-win arrangements through a realistic and practical strategy.

Javid Ahmad is a nonresident fellow at the Atlantic Council’s South Asia Center and at West Point’s Modern War Institute. The views are his own. On Twitter: @ahmadjavid

Image: A Marine scans the horizon at the start of a nine-hour night patrol in the Helmand Province of Afghanistan. DVIDSHUB/Public domain