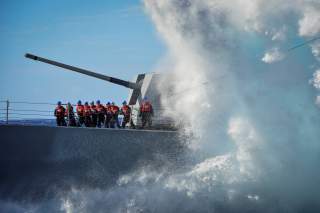 President Trump’s upcoming five-country Asian tour takes place amid deepening worries about security trends across the region. North Korea’s nuclear and missile programs menace American allies and the homeland itself. China’s combination of ambition and improving military capabilities threatens to upend the balance of power. Add to these concerns the trafficking of narcotics, maritime piracy, increased cyberattacks and the need to respond to large-scale natural disasters. The demand for U.S. attention and resources in Asia is increasing—just as U.S. defense spending has been falling in recent years.

America thus faces a dilemma. It wishes to preserve an Asian balance of power, reinforce the rules-based regional order, avoid conflict and maintain stable economic relations with China—all at the same time, and all at acceptable cost. Yet, the previously privileged position of the United States in the region is under new pressure. A congressionally-mandated review of U.S. defense strategy in the Pacific last year concluded: “Actions by countries in the region routinely challenge the credibility of U.S. security commitments, and U.S. capability development is not keeping pace with challenges by potential competitors, resulting in the regional balance of military power shifting against the United States.”

The President’s travel—to three American allies (Japan, South Korea and the Philippines), one rising partner (Vietnam) and to China—highlights one way in which Washington can address the challenge. Trump should work to embed America’s alliances and nascent security relationships into a broader network of security partnerships.

The challenge posed by Beijing is foremost in this array. During the recent 19th Party Congress, President Xi Jinping referred to his country as a “great power” or a “strong power” some twenty-six times. While there’s nothing inherently problematic about such characterizations, Xi also highlighted the buildup of artificial islands in the South China Sea as a highlight of his term, promised greater military modernization and emphasized the need for increased combat capability. Already, China’s investment in long-range, precision strike forces, a blue water navy, and high-end cyber and anti-satellite capabilities challenge traditional U.S. military advantages. In addition, the region’s increasing economic dependence on China, and Beijing’s coercive employment of economic tools for foreign policy ends, threaten the independence of key U.S. partners.

Herein lies opportunity. Building out a regional security network is a cost-effective way for the United States to advance its interests and uphold regional order—not as a substitute for the alliance system, but as a necessary supplement to it. Such an approach is also fully consistent with the Trump administration’s encouragement of allies and partners to bear more of the burden for their own security.

There are a number of steps the Trump administration can take to encourage Asian security networking.

Washington has made important strides in recent years in strengthening its bilateral alliances with Japan and Australia, for instance, and yet there remain areas where it should go further still. Tokyo and Washington should coordinate outreach to third countries like India, Vietnam, the Philippines and others, inviting them to join exercises, military exchanges and efforts to build partner capacity. Similarly, Washington should establish a formal long-term strategy mechanism with Canberra to augment their annual ministerial consultations. With both countries, the United States should initiate new efforts, including expanding amphibious, undersea and anti-submarine warfare exercises.

The administration should also encourage the slow, quiet enhancement of defense cooperation among Japan, South Korea and the United States—here the shared North Korean threat can act as a catalyst. It should re-energize quadrilateral cooperation together with Australia, Japan and India, and seek every opportunity to tighten bilateral bonds with New Delhi, especially in the air and maritime domains. Washington can add new Asian partners to standing military exercises, establish a regional cyber forum to share threat assessments and policies, and bring friends together to coordinate partner capacity-building efforts.

These efforts would help bolster regional security—and could help make the President’s Asian swing successful in the bargain. Coupled with a demonstrated commitment to Asia, rather than estrangement from it, Trump’s efforts to further a regional security network could suggest an American vision for a region in search of one.

Richard Fontaine is president of the Center for a New American Security and coauthor of Networking Asian Security: An Integrated Approach to Order in the Pacific.

Image: Sailors assigned to the Arleigh Burke-class guided-missile destroyer USS Sampson are seen during a fueling-at-sea with the aircraft carrier USS Theodore Roosevelt (not shown) in the Pacific Ocean on October 14, 2017.​