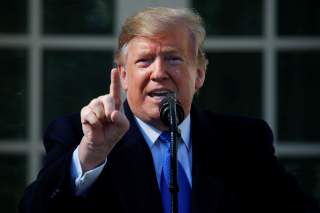 With his announcement in the Rose Garden this morning that an emergency declaration to build a wall on the southern is “a great thing to do,” President Donald Trump has initiated a fresh struggle over American immigration policy. Trump himself predicted that his move would be litigated all the way up to the Supreme Court. He expressed confidence that his decision would be upheld as vital to national security in order to stop an “invasion of drugs and people.”

How justified is Trump’s action? At bottom, the U.S. Congress is a failed institution. Its most basic function is to raise and allocate revenue, but Congress is now notoriously incapable of passing a budget, and even passing continuing resolutions just to keep the government open is often more than the modern House and Senate can muster. The president is not at fault—not, constitutionally speaking, unless he vetoes spending legislation. Whatever this or any other president wants from Congress, the legislature itself has certain responsibilities that it simply fails to meet. If it cannot handle appropriations, then its own raison d’etre, no wonder it can’t handle national security or immigration policy. And so the president is performing an end run around Capitol Hill to build his wall.

The president can do that because Congress, over decades, has given the executive branch wide discretionary emergency powers. Now that Trump has declared an emergency, the Democratic-controlled House of Representatives will likely vote to declare the emergency over, which will trigger an automatic vote in the Republican-controlled Senate. As of now, a half-dozen or so Republican Senators are talking tough about refusing to go along with Trump’s emergency declaration. But will they really vote with the Democrats instead? Maybe they will find safety in numbers, if they collectively defy not only their party’s president but the GOP’s voters as well. It may prove to be a risky vote, however, with very little practical consequence. Unless the Senate passes cancellation legislation with a veto-proof majority, Trump will still get to employ his emergency powers. Then the challenge to the emergency declaration will go to the courts.

The Framers of the Constitution expected Congress, not the courts, to be the check on presidential power—and in modern times federal courts have been very deferential to the executive branch where questions of national security are concerned. Congress has also been deferential, and so the battle over Trump’s wall may be lost before it has even begun. The Supreme Court is unlikely to want to make itself the final arbiter of whether there is a genuine national-security emergency in the country or not: that’s a matter for the political branches, and we do have two of them. If an emergency is not legitimate, then Congress has the power and responsibility to cancel the president’s declaration. If Congress cannot politically do that, then as far as the political process is concerned, the emergency is legitimate. The best hope Trump’s opponents have of thwarting his declaration lies with the possibility that the Supreme Court will find narrow grounds on which to invalidate it—grounds that would not involve usurping the properly political determination of whether there is a national emergency or not. What such grounds might be is guesswork at this stage. If I were placing a bet in Las Vegas, though, I would wager that the court upholds Trump’s authority.

Might that precedent come back to haunt Republicans if a future Democratic president declares a state of emergency in order to pursue gun control or another liberal objective? Possibly, although border control using the Army Corps of Engineers and other military resources is a very different proposition from attacking a constitutional right such as the right to keep and bear arms. But in any event, Trump is only illuminating a problem that Congress created in the first place when it started delegating such powers to the executive branch. The same is true, of course, with respect to the way Trump has used presidential powers to negotiate trade—he has such powers because Congress gave them to the president. And Congress did that in order to hand off a hot potato: fearful legislators didn’t want trade arguments to intrude into their primaries and general-election campaigns. Talk now of taking back the president’s trade authority sounds like so much bravado: Congress still doesn’t want to be the focus of trade controversies.

Trump is set to deliver on one of his loudest promises of 2016. Those on the right who follow immigration policy closely are not happy with what Trump conceded in order to keep the government from shutting down again: the compromise legislation the parties in Congress agreed to in order to fund the government through the end of the fiscal year “is tantamount to an illegal immigration ‘stimulus,’” Fox News’s Laura Ingraham warned, “de facto amnesty to any ‘sponsor,’ family member or ‘potential sponsor’ of an unaccompanied minor.” But Trump voters who make the wall itself a top priority will see his emergency declaration as a step toward fulfilling his commitment from 2016. The use of emergency powers to build the wall finds more opposition among the public at large than the wall itself does, according to recent polls. For many of his core supporters, however, Trump’s unorthodox move will be a mark of fidelity. Chances are that Trump will move the whole GOP toward his position, leaving dissenting Senate Republicans isolated. The political pressure on them will be intense, all the more so because they will appear to be on the same side as the president’s most implacable critics.

Yet even if Trump wins every political and legal battle, the wall may be a long time coming—with voters next year having the decisive say. What Congress proved incapable of doing—either funding the wall or stopping the president from pressing ahead anyway—the public will get a chance to do for themselves.