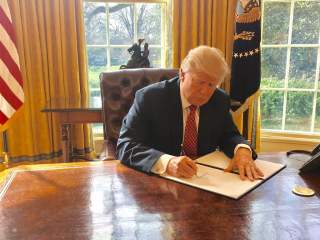 Congress now has President Trump’s long-awaited “skinny budget” in hand. While the preliminary proposal addresses discretionary spending only (just a third of what is projected to be a $3.6 trillion-plus budget for FY 2018), it sends at least two clear and welcome messages: national defense will be a top priority, and President Trump intends to start trimming the oversized federal bureaucracy immediately.

A closer look at how Washington spends taxpayer dollars is long overdue. Congress should take decisive action to curtail wasteful spending—something that includes excessive regulation and nonperforming or duplicative programs. It should also scale back the reach of federal bureaucracies, which increasingly have assumed roles and responsibilities more properly handled by the private sector or by state and local governments.

In total, Trump’s plan would spend $1.065 trillion on base discretionary programs in FY 2018. That is the ceiling stipulated in the Budget Control Act of 2011. But Trump would provide $54 billion more for defense than the BCA cap. He would offset this by cutting other discretionary by $54 billion more than called for by BCA.

Although greater savings could be achieved by additional cuts in the size and scope of government, this plan is a good first step.

The most worrisome part of this proposal is not what it would do in FY 2018, but in what it would do in the current fiscal year. The president is requesting a $25 billion hike in defense spending for FY 2017, but has proposed only $15 billion in offsetting spending cuts elsewhere. To reinforce his message that budgeting is about prioritizing competing needs, the president should step up to the plate and propose cuts that will fully offset his FY ’17 defense spending request.

Critics from both sides of the aisle argue that the FY ’18 cuts are too drastic, and that the proposal fails to address the real drivers of our debt: entitlement programs. Certainly long-term fiscal stability will require an overhaul of entitlement programs, but these critics miss a key point. Reducing discretionary spending is not only about reducing the deficit. It also helps to eliminate federally funded corporate cronyism and remove government-imposed barriers that needlessly inhibit individual freedom.

President Trump’s proposal puts Washington on notice that no program or budget line item is above scrutiny, and the American people deserve accountability from their government about how it spends their money. And there is no better time to start the process than now.

Weeks ago, the nonpartisan Congressional Budget Office (CBO) released updated budget and economic projections for the next decade. CBO currently projects that, if nothing changes in how Washington handles the budget, the federal debt will increase by $9.4 trillion over the next ten years. That figure represents almost 90 percent of the economy. Clearly, the current fiscal path must change before long-term damage is done to the economy. Congress should carefully examine the government reorganization proposed by the president, and consider adopting and even expanding on it.

In looking to carry out cost-saving proposals, Congress should follow certain guidelines.

First, lawmakers should identify and eliminate those programs that reduce economic freedom and opportunity or provide benefits to politically favored industries and corporations.

Next, they should closely examine whether or not taxpayers would be better served if the program were financed and administered by the private sector or state and local jurisdictions.

Finally, they should eliminate wasteful and duplicative programs that no longer serve their original intent.

President Trump’s budget blueprint is an important first step toward reducing the size and scope of the federal government. Ultimately, it will fall to Congress, through the budget and appropriations process, to act upon these recommendations.

For the sake of the nation’s economic future, lawmakers should carefully and dispassionately look at each proposal. By acting responsibly, Congress can begin to get the federal debt under control, an achievement that will spark economic growth that will improve the lives of all Americans.

Justin Bogie is the senior policy analyst in fiscal affairs at The Heritage Foundation’s Roe Institute for Economic Policy Studies.