Trump's Colombia Envoy Should Know Something about Drug Wars 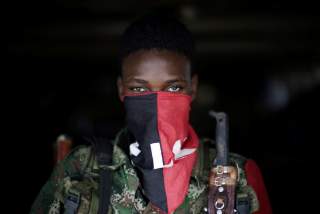 Latin America has stood out as an area of foreign-policy interest for Donald Trump since the early days of the 2016 campaign. And so far, with the presidency in hand, the Trump administration has made headway on many of its campaign promises regarding the region—from addressing the crisis in Venezuela to improving President Obama’s flawed Cuba policy.

Even with the U.S.-Mexico relationship in need of serious course correction, the president has advanced regional policy in meaningful ways.

Another Latin American country that should rank high on the administration’s agenda is Colombia. That nation has suffered terribly from drug traffickers, intense street crime and a brutal terrorist organization known as the Revolutionary Armed Forces of Colombia (FARC).

And those problems have a nasty habit of spilling over into the United States. FARC remains a U.S.-designated foreign terrorist organization. Colombia has routinely been a leading source in the world for cocaine, and the source for nearly all of the cocaine seized in the United States.

Washington needs a strong ambassador with a deep understanding of Colombia’s threats and opportunities, a demonstrated commitment to the president’s foreign policy vision and the confidence of the White House. Joseph Macmanus has been nominated to the post, but he is not the man for that job.

Since 2003, Macmanus has served at the U.S. State Department in various senior capacities in the Legislative Affairs bureau, as executive assistant to the Secretary of State and as the U.S. permanent representative to the United Nations Office in Vienna and to the International Atomic Energy Agency. From 1986–2003, he served at the U.S. Information Agency in public diplomacy roles, and was posted to Mexico, El Salvador, Poland and Belgium.

Over the last two decades, all U.S. ambassadors to Colombia had considerable experience working on regional narcotics and security challenges. While Macmanus’s career as a U.S. foreign service officer is commendable, his lack of relevant and recent involvement in Western Hemisphere affairs will significantly undermine his effectiveness.

The diplomatic mission in Bogota is one of Latin America’s most complicated. Colombia has routinely been a leading source in the world for cocaine. And despite the recent peace agreement with the government, FARC fighters still control parts of the country.

FARC’s tentacles are as deep as they are deadly. For decades, the group financed its Marxist political ambitions with drug trafficking, kidnapping and murder. While branding themselves as revolutionaries, they built a massive criminal empire through sheer terrorism. The over half-century-long conflict with Bogota resulted in the deaths of 250,000 Colombians and displacement of seven hundred thousand more.

Recognizing that Colombia’s stability was a vital U.S. national-security interest, the United States in 2000 signed “Plan Colombia” into law. Since the plan went into effect, violence and kidnapping rates have plummeted, paving the way for economic growth. Coca cultivation decreased over 50 percent from 2007–12. The current U.S. ambassador to Colombia, Kevin Whitaker, reports that 2015 homicide rates were the lowest in forty years, and kidnappings have declined by 90 percent.

Colombia’s security forces now train their counterparts in Central America, a major source of U.S. unlawful immigration. Colombia is now better equipped to work alongside the United States on regional challenges, such as the Venezuela crisis. Since 2013, Colombia has been NATO’s only partner in Latin America.

Plan Colombia also led to the decline of FARC troop numbers and their criminal capability. Whereas FARC forces consisted of an estimated twenty thousand combatants in the late 1990s, those numbers have fallen to about seven thousand. Colombia is also closing out the first year of its ambitious peace agreement with the FARC, ending the fifty-two-year conflict.

All of this progress came with a cost. While Colombians sacrificed the majority of the human treasure, the United States’ steadfast support and $10 billion investment in security and development helped Colombia’s transformation. And despite the accomplishments, Colombia is not out of the woods just yet.

According to the former assistant secretary of state for international narcotics and law enforcement affairs, William Brownfield, Colombia is once again the world’s largest producer of cocaine and the source of 90 percent of the cocaine seized in the United States. Directly connected to this cocaine production surge is the growth of fatal cocaine overdoses in the United States: 6,784 deaths in 2015 alone, the highest number since 2006.

Weaknesses in the FARC peace agreement itself could threaten the successes of Plan Colombia. While FARC is now a recognized as a political party, it still retains its illicit drugs and assets. The organization can easily use its drug money to corrupt Colombia’s electoral system.

Further, the peace agreement does not clearly define which crimes will lead to jail time or exclusion from the political process for FARC combatants. Hence, a FARC combatant found guilty of drug trafficking, kidnapping or recruitment of child soldiers could still be elected to public office.

FARC’s opposition to U.S. extradition will be a sensitive political issue for the next ambassador. As a result of criminal indictments against them, dozens of FARC combatants are wanted by the U.S. government, including FARC’s leading negotiator during the peace process, Rodrigo Londoño Echeverri, known as Timochenko. The State Department alleges that he “set FARC’s cocaine policies,” ordering the “murder of hundreds of people” and the kidnapping of U.S. citizens. Timochenko is also a declared presidential candidate for Colombia’s 2018 election.

Effectively addressing Colombia’s challenges while advancing the bilateral relationship means more than just keeping the lights on at the embassy. The United States needs an ambassador with a direct line to President Trump who can shape the direction of policy. Colombia deserves a nominee who understands Colombia, and who will know how best to navigate the extremely challenging times ahead, not only bilaterally but throughout the region.

Joseph Macmanus has been absent from the region far too long. And the problems pressing on Colombia are too urgent to accommodate a learning curve.

A former acting director of the Defense Intelligence Agency, David R. Shedd is a visiting distinguished fellow in the Heritage Foundation’s Davis Institute for National Security and Foreign Policy.