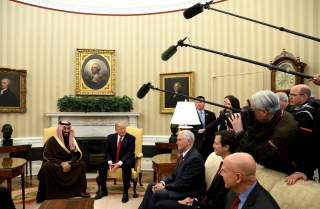 Saudi Arabia’s powerful crown prince, Muhammad Bin Salman, who has sought to transform the Kingdom from a status-quo power to one that seeks to shape regional events, is set to visit the White House on March 19. The crown prince, who is commonly referred to as MbS, will also seek to strengthen ties with the U.S. business community and present his so-called Vision 2030 for Saudi Arabia.

The Trump-MbS meeting, however, is expected to primarily focus on the Trump-administration’s push to resolve the Gulf crisis, which was triggered on May 24, 2017, when the official Qatar News Agency was hacked and attributed a fake statement to Qatari Emir Sheikh Tamim bin Hamad Al Thani. U.S. officials have since attributed the hack to the United Arab Emirates, a charge that Abu Dhabi denies.

On June 5, Saudi Arabia, the UAE, Bahrain and Egypt severed diplomatic ties with Qatar over allegations that it is supporting terrorism and embraces Iran and its regional agenda. The block also imposed an economic embargo on Qatar—which includes cutting off all food supplies and access to medicine—by closing off land and maritime borders. Qatar has denied the charges.

As part of a U.S. effort to resolve the GCC crisis, Washington hosted the inaugural U.S.-Qatar Strategic Dialogue on January 30.

The dialogue not only presents Doha with a diplomatic victory as it effectively demonstrates that the accusations leveled against it were false and politically motivated, but more broadly signals that Washington sees stability in the Gulf as a key national security interest.

Towards that end, Trump has also invited the Crown Prince of Abu Dhabi, Mohammed bin Zayed Al Nahyan, who is effectively the ruler of UAE, to visit the White House around March 27; the Emirati leader is widely seen in Washington as the protagonist of the crisis.

And some ten days later, Emir Tamim is expected to pay the White House a visit as well. Following the three consecutive U.S.-GCC bilateral meetings, the White House is planning to host a Camp David Summit for the GCC leadership to formally bring the crisis to an end.

For the time being, however, there are no indications of de-escalations of the GCC crisis as the harsh anti-Qatar rhetoric displayed by Emirati and Saudi officials continue unabated.

In parallel with resolving the Gulf crisis, Trump seeks to accelerate the Middle East peace process is meant to bring Israel closer to the GCC as part of a broader strategy toward isolating Iran regionally.

The upcoming Trump-MbS meeting is tied to the U.S. administration’s recently launched National Security Strategy, which identifies Saudi Arabia and Israel as the principal pillars of Washington’s regional agenda. The document also calls for GCC unity.

While Iran is identified in the document as Washington’s premier regional adversary, the strategy was published amid uncertainty over whether Trump will walk away from the Joint Comprehensive Plan of Action (JCPOA) aimed at curbing Iran’s nuclear ambitions.

The U.S. administration has in parallel sought to provide the Kingdom with the necessary intelligence support to prevent Yemen’s Houthi rebels from securing strategic gains after they overran the Yemeni capital of Sanaa in September 2014 and subsequently forced President Abdrabbuh Mansur Hadi into exile in Saudi Arabia.

Escalating tensions between Washington and Tehran could potentially impact Riyadh, whose military is already fighting a costly war against the Houthis.

However, nearly three years into the Saudi-led coalition’s war against the Houthis, the conflict has turned into a stalemate. Despite the Coalition’s air supremacy, ability to launch airstrikes across Yemen and having imposed a maritime blockade on the Arab World’s most impoverished country, the Kingdom has failed to weaken the Houthis’ standing as Yemen’s strongest political actor.

Amid these developments, U.S. Senators Mike Lee (R-Utah) and Bernie Sanders (I-Vt.) pushed on Wednesday February 28 the White House to end U.S. military involvement in Yemen’s civil war. The two lawmakers, along with Sen. Chris Murphy (D-Conn.), filed a joint resolution questioning U.S. support for a Saudi-led coalition fighting Yemen’s Houthi rebels.
The changes dynamics in Washington, along with the fact that the price of the stalemate between the two opposing parties has been nothing but catastrophic for Yemen’s population as it has unleashed the world’s most sever humanitarian disaster, are expected to top the Trump-Salman meeting agenda.

These dynamics, along with the fact that the price of the stalemate between the two opposing parties has been nothing but catastrophic for Yemen’s population as it has unleashed the world’s most sever humanitarian disaster, are expected to top the Trump-Salman meeting agenda.

Leading up to the Trump-MbS meeting, the U.S. State Department has over the past couple of weeks engaged in behind-the-scenes diplomatic maneuvering to apply pressure on Riyadh and Abu Dhabi to open up Yemen’s port of Hodeidah for humanitarian supplies. The U.S. diplomatic pressure is directly tied to Yemen’s deepening humanitarian crisis, which has only been further exacerbated by a string of coalition airstrikes that have killed hundreds of civilians and injured thousands of others.

The failure to accelerate a peace process for Yemen could potentially have significant consequences for Saudi security in light of the recent string of Houthi missile attacks targeting the Saudi capital, which suggest that the Houthis could—with Iranian support—escalate their missile strikes on Riyadh.

With the war in Syria winding down, Yemen could become the theater where Tehran chooses to escalate against Washington by targeting Saudi Arabia through stepping up rocket attacks targeting Riyadh. Given that Russia remains a key player in Syria, and that President Vladimir Putin has forged pragmatic relationships with Turkey, Israel, the Arab states and Iran, it seems unlikely that Tehran would challenge the Russian-supported status-quo in Syria, especially now that the tide has turned in favor of the regime of Bashar Al-Assad. Given these dynamics, it would be a mistake to consider the recent Israeli-Iranian flare up over Syria as an escalation towards a hot conflict but rather as an isolated incident meant to test each other’s resolve.

The Trump-MbS meeting will therefore likely focus on these dynamics, along with identifying concrete steps on how to deal with the Syrian conflict lurching towards a political settlement with the Assad’s regime backed by Moscow and Tehran against opposition groups that Washington and Riyadh previously supported.

The two leaders will likely assess how to engage with Russia, Iran and Turkey following their rapprochement over Syria.

But amid Trump’s push to bring Tel Aviv and Riyadh closer as part of his strategy to isolate Tehran, the Saudi standing among Palestinians have suffered dramatically, which could hamper the Kingdom’s ability to help accelerate the Middle East peace process.

A survey conducted by the Palestinian Center for Policy and Survey Research in Gaza and the West Bank found that 82 percent of Palestinians do not trust the Saudis would defend their rights, and 75 percent and 70 percent do not trust, respectively, the UAE and Egypt, both major Saudi allies.

Complicating the matter is that Egypt under the leadership of President Abdel Fattah el-Sisi, is growing increasingly insecure—with terrorist groups launching repeated attacks against civilian targets despite Cairo’s repressive tactics against all sort of descent well-beyond its archenemy of the Muslim Brotherhood. Ahead of the upcoming Egyptian presidential election, violence could surge while the government could respond in kind employing additional repressive measures against political opponents under the disguise of security and fighting extremism.

These dynamics help explain what appears to be MbS’ last minute decision to visit to Egypt on March 4 as part of an effort to demonstrate Saudi support for Sisi ahead of Egypt's
presidential elections. After Egypt, he travels to London on March 7 and the United States.

Egypt’s internal struggle against terrorism and failure to revitalize its struggling economy raises questions about its ability to help bridge Israeli-Palestinian differences, which are issues that the Trump-MbS meeting will likely focus on as well.

Trump has repeatedly stated his desire to solve the Israeli/Palestinian conflict and has called on Riyadh, Abu Dhabi and Cairo to help apply pressure on Ramallah in exchange for providing enhanced intelligence support for Riyadh against the Houthis.

Egypt’s mounting instability—coupled with Palestinian distrust in the respective U.S. and Saudi intentions to accelerate the Middle East peace process—could complicate regional efforts to forge a solution to the Israel-Palestinian conflict.

The Trump-MbS meeting will take place within the framework of the Strategic Joint Consultative Group, which was launched in Riyadh of 2017. The SJCG was launched in parallel with Trump’s Riyadh address to the Arab-African leaders

The group, which will meet at least once a year, alternating between the two countries. The group will focus on a host of issues ranging from security cooperation, counter terrorism financing, energy, economy and trade. It is unclear whether representatives from the business community will take participate this time as well as they did during Trump’s first trip