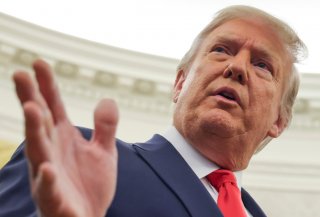 Even as the coronavirus continues to spread—Colorado has reported the first known case of a variant in America—states are starting to ignore the federal guidelines for distributing a vaccine. Texas, Florida, and others are focusing on the elderly rather than so-called front-line workers, a decision that is based on morality rather than mere utility. But if the battle over how to distribute the vaccine is becoming inflamed, it’s also the case that the Trump administration is simply failing to distribute the vaccine effectively in the first place. Here’s the most damning indictment of its efforts: Just as the United States closed in on two healthcare victories of authorizing the Pfizer-BioNTech and Moderna Covid-19 vaccines in record time, health officials admitted that the federal government will not achieve its self-imposed deadline of vaccinating 20 million Americans by the end of December. Yet a number of other countries, including Great Britain, are zooming ahead of America in the race to vaccinate their citizens. Where is the outrage in America?

Roughly 11.4 million doses have been distributed as of Monday morning and only 2.1 million have been administered, according to the Center for Disease Control and Prevention (CDC) vaccination tracker data. With just two days left until the new year, that would mean millions of doses would have to be injected into the arms of Americans each day to meet the Trump administration’s Operation Warp Speed’s goal of reaching the 20 million mark.

“We certainly are not at the numbers we wanted to be at the end of December,” Dr. Anthony Fauci, the nation’s top infectious disease expert, told CNN on Tuesday. “I believe that as we get into January, we are going to see an increase in the momentum which, I hope, allows us to catch up to the projected pace that we had spoken about a month or two ago when we were talking about the planned rollout of the vaccinations.”

Fauci’s optimism over vaccine distribution in 2021 has been echoed by other public health leaders, but there are still several lags that have broken Warp Speed’s deadline.

An early hurdle that hospital systems faced was when Warp Speed told state and local governments to expect fewer Pfizer vaccine doses in the second shipment than what was originally intended, a hiccup dubbed as a “miscommunication” by Gustave Perna, who oversees the Trump administration’s vaccine distribution effort. Perna also apologized to the states, as healthcare workers are exhausted and hospitals across the United States are at or near full capacity.

“The initial goals that were set, the predictions that were made, were very aspirational,” Dr. William Schaffner, professor of infectious diseases at Vanderbilt University School of Medicine, said. “They were, shall we say, inflated. And I think the people in Washington made a big mistake. We should have learned this from 2009 when we had the same issue. Don't over promise and then underdeliver. You should underpromise and overdeliver.”

Other factors that have likely caused the lag include the obstacles of distributing and administering the vaccine, discrepancies in reported vaccine data, and overwhelmed hospital systems that are crowded with coronavirus-related patients.

Challenges of Distributing and Administering the Vaccine

Although the Food and Drug Administration provided emergency use authorizations to two Covid-19 vaccine candidates, hospital systems have confronted several logistical issues that were neglected in the country’s preparation for the vaccine launch.

Aside from the logistical challenge of creating internal prioritizations—or which frontline workers should be the first to get the vaccine within the individual hospitals depending on the amount of exposure to COVID-19 patients—is reducing skepticism to actually getting inoculated. Hospital systems have spent much time educating and reassuring staff that the vaccines can be trusted.

Schaffner noted that Vanderbilt University School of Medicine has conducted Q&A sessions to boost trust in the vaccine, preparation that’s forced the vaccination process to move slowly, as it takes “time and effort” to build a smooth administrative procedure.

R. Alta Charo, a professor of law and bioethics at the University of Wisconsin-Madison Law School, also pointed to the fact that in nursing homes—a group that was largely part of the second shipment of the vaccines—residents may “need extra time to understand and consent to vaccination” or facility staff may need approval from family members in order to give residents a vaccine.

“Nursing homes may have arrangements for on-site pharmacy services, but here not only are staff overworked, but the residents may need extra time to understand and consent to vaccination, or there may be a need to contact family members with decision making authority for those residents no longer competent to give consent. This takes time,” Charo said. “But after these phases it gets even more difficult, as identifying people in the community who are older and more exposed, more vulnerable, or more likely to be working in essential service jobs is not easy.”

In terms of physically administering the vaccine, it’s not like the flu shot, where a person can just get it and leave. Instead, those who receive the Covid-19 vaccine must wait nearly fifteen minutes after, being monitored by nursing staff to make sure there isn’t an adverse reaction.

Another logistical barrier in meeting Warp Speed’s deadline can be due to the lack of “adequate refrigeration capacity,” according to Mark M. Capofari, who was director of global logistics at Merck and currently lectures on supply chain management at Penn State University, since both Pfizer and Moderna need ultra-cold temperatures for storage.

There’s also an extensive process for unpacking, counting, inventorying, thawing, and coordinating each dose of the vaccine.

“Although we as taxpayers have invested an awful lot of money in creating the actual vaccine and then testing it and actually transporting it, what we haven’t invested in is the actual delivery system that moves the vaccine from the refrigerator into arms. And that’s actually the hardest part,” Schaffner said.

While it is a small factor in the reasoning for the data lag, officials from Health and Human Services and the CDC noted that the agency’s tracker for administered vaccinations are under tallied.

Since hospitals have received initial shipments of the Covid-19 vaccine, state and local governments have launched new methods of vaccination reporting, brewing a delay in the data. The CDC’s figures also do not take into account inoculation initiatives at long-term care facilities, a group that just started its first round of vaccinations.

The data has just begun including the Moderna vaccine data, which is being launched in nearly 3,500 locations across the United States.

Schaffner also emphasized the structure of the reporting process: hospitals send figures to the corresponding state’s health department, the state health department must then collect all data from every hospital system within its jurisdiction, which then is reported to Washington, DC. The long procedure likely caused a delay “in moving the numbers up the chain,” particularly during the holiday season.

As of Tuesday, there are more than 121,000 coronavirus-related hospitalizations within the United States, the highest the figure has ever been since the start of the pandemic, according to The COVID Tracking Project. Cases are also averaging about 200,000 per day, with the highest daily death count of 3,448 on Dec. 16.

Health officials have expressed concern that holiday travel could generate another deadly wave of infections across the country, adding more stress to the already stretched thin healthcare system.

“That’s what we’re concerned about—that in addition to the surge, we’re going to have an increase superimposed on that surge, which could make January even worse than December,” Fauci said in the CNN interview.

The unseen coronavirus cases and deaths have made it hard for state and local health officials to effectively implement contact tracing systems and quarantine rules to combat the infection’s rapid spread. With New Year’s Eve approaching, the CDC, along with public health experts have encouraged families to stay at home and spend the holiday with people within their same household.

Not only are health care workers completely overwhelmed, but also state and local health department staff have worked endless hours to ensure a structured and proper vaccine rollout.

“One of the things that are underreported, we report quite diligently and appropriately on how exhausted people are working in hospitals, emergency departments, intensive care units. What’s not been seen is that people in state and local health departments are equally exhausted,” Schaffner said. “They have been working literally day and night and on the weekends on these vaccine distribution programs. They are stretched to their limits. They are putting routine work aside in order to make sure this vaccination program works.”

But Warp Speed’s shattered deadline shouldn’t squash all glimmers of hope for vaccinations, as two other candidates are in the pool. Johnson & Johnson is testing a vaccine that only offers one dose, and if it proves to be safe and effective, it is likely to be granted authorization by the FDA in February, pumping another 100 million doses to the U.S. supply.