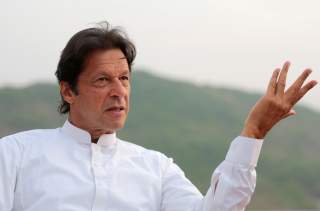 Imran Khan was a very happy man when he left Washington, DC. In his highly publicized meeting with President Donald Trump, the Pakistani prime minister might just have secured a much needed “reset” with the Americans. Foreign-policy savants had long predicted a cold shoulder for Khan upon his arrival in Washington where Pakistan has created more foes than friends. Both inside and outside the American establishment, there has been a growing chorus wondering if it is time to dump and punish Pakistan.

Among them was Trump himself. Last year in a tweet, he accused Pakistan of “giving us nothing but lies and deceit” and immediately suspended financial aid to Pakistan. Similarly, during the Indo-Pak crisis earlier this year, the United States had clearly sided with India. National Security Advisor John Bolton’s acknowledgement of India’s right to self-defense during the crisis was tantamount to an American green signal for the Indian airstrikes that followed the suicide bombing in Kashmir. In part, this reflected a change in America’s South Asia policy, which seemed to be based on two underlying principles: ending the war in Afghanistan and improving its partnership with India. With regard to both, Pakistan was seen an irritant. In Afghanistan, the United States has accused Pakistan of destabilizing the American efforts by harboring the Taliban and its affiliates, particularly the Haqqanis. Similarly, in recent years the United States has strengthened its ties with India, an arch rival of Pakistan. There is much economic and strategic momentum now carrying the relationship forward.

But during Khan’s visit, Trump exhibited his characteristic volte-face. The president said, “Pakistan never lies” and even hinted a possible resumption of financial aid to Islamabad. This is in addition to his compliments for Khan, whom he praised as a popular leader and a great athlete touching on his sporting past. The only thing which can explain this reversal is Afghanistan. Trump appears willing to court Pakistan with a hope that the latter will help him in his Afghan peace initiative. Under Trump, we have witnessed a renewed attempt to bring the Taliban to the table for talks. His envoy to Afghanistan, Zalmay Khalilzad, again met Taliban officials in Doha this week with a hope to end the seventeen-year deadlock in Afghanistan, and touted that “excellent progress” had been made. Both Khalilzad and Trump are aware that without Pakistani help, it is improbable to secure Taliban’s cooperation. Imran Khan, too, was happy to butter up his American counterpart’s obsession for cutting out deals saying, “This is the closest we have been to a peace deal in Afghanistan.” Khan, it seems, has convinced the Americans that they are on the same side when it comes to Afghanistan.

But the real success for Khan lay in shifting the attention to Indo-Pak relations. While the meeting was supposed to prioritize Afghanistan, Trump did not hesitate to use the K- word. Trump told Khan that Indian prime minister Narendra Modi has asked him to mediate the Kashmir dispute during the sidelines of G20 Summit in Osaka, and that he was willing to arbitrate in the matter. Unsurprisingly, India’s foreign minister responded by saying that no such request had been made by Modi to Trump. This appears quite logical as well. India had resisted outside intervention on Kashmir even when it was far more evenly matched with Pakistan than it is today, and it is highly unlikely that Modi would have raised the Kashmir issue. Nevertheless, Pakistan would consider the mention of Kashmir as the biggest takeaway from the meeting since it has long sought internationalization of the Kashmir dispute. While Pakistan has long sought third party mediation in Kashmir, the Indians have been extremely sensitive to any outside advice. Trump’s statement would thus invariably come as a blissful surprise for Pakistan.

From the U.S. perspective, the results are mixed. Despite having repeatedly requested the release of Dr. Shakil Afridi—who helped the CIA trace Osama bin Laden in Abbottabad—Pakistan was adamant against terminating his detention. However, speaking to the media, Imran Khan hinted at Afridi’s possible release which would effectively play well for Trump’s optics. Moreover, we might see a more conciliatory attitude from Pakistan and consequently the Taliban towards the peace process in Afghanistan. But the biggest takeaway for the United States would be pulling back Pakistan from China’s clout. In spite of all its problems, Pakistan is a strategically located country. The Chinese were quick to pounce on the opportunity when they announced infrastructure projects worth over $60 billion in Pakistan under the China-Pakistan Economic Corridor (CPEC). It has caused apprehension in American policy circles that the Chinese might build military bases along the Pakistani coastline, which oversees the Strait of Hormuz.

However, with a dying CPEC, Pakistan itself has increasingly come to realize the limits of Chinese support and influence. It had earlier sought Chinese help to save its debt-ridden economy, but Khan eventually had to accept a bailout package of $6 billion from the U.S.-backed International Monetary Fund (IMF). Similarly, prior to Khan’s visit to the United States, Hafiz Saeed, a UN-designated terrorist whose persecution the United States has long sought, was arrested in the Punjab province as a measure to please Washington. For its part, the United States will be more than willing to replace China in Pakistan. If the United States is able to pull Pakistan away from China’s influence, then this would invariably send a signal of American resilience across Asia, particularly when many countries like Turkey and Philippines are looking for an alternative to the United States.

Yet this has come at a cost. Trump’s mention of Kashmir has been a huge embarrassment for the Modi government. Indian opposition parties staged a walk out from the Parliament of India, calling Trump’s statement on Kashmir a “blow to the unity of India.” The opposition is insisting for a personal statement from Narendra Modi while accusing him of compromising the territorial integrity of India. New Delhi is one of Washington’s most critical allies in Asia with whom it has a wide range of converging interests. Yet, by mentioning Kashmir despite how much India hates that, Trump has infuriated a vital partner in America’s Indo-Pacific strategy. The U.S.-India relationship was already in a downward spiral following India’s purchase of the Russian S-400 missile and the allusion to Kashmir has made things worse.

Overall, it seems, Khan came out as the winner by having successfully outplayed India and avoided a browbeating by the United States over Afghanistan. Meanwhile, Trump will have to answer to a visibly embarrassed State Department and India over his Kashmir remarks. On a more structural front, it is apt to say that neither side has been a perfect ally and that even after a successful meet, the two countries have divergent interests in Asia. The good news is that both the United States and Pakistan are ready to meet each other halfway. With a welcoming America, Pakistan has a real opportunity to course correct its international perception while the United States stands to benefit by denying China virtual control over Pakistan and increasing the likelihood of withdrawing peacefully from Afghanistan.