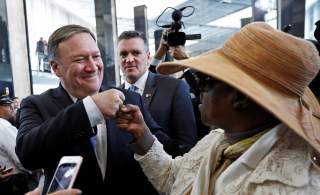 Unveiling a treasure trove of files that showed Iran “brazenly lied” when Tehran said it did not have a nuclear program, Netanyahu claimed to have “conclusive” evidence of the “secret program.”

Implications for Netanyahu’s release of the cache of Iranian files:

- The treasure trove reinforces President Trump’s inclination to decide on withdrawing from the nuclear deal with Iran, if Tehran declines to renegotiate the accord, by May 12.

- Release helps our allies, which have advocated renegotiation.

- Israel’s cache makes Pyongyang more susceptible to our effort to use coercive diplomacy.

On March 13, 2018, Mike Pompeo, former director of CIA and current secretary of state, and National Security Advisor John Bolton, agreed with President Trump’s position: the nuclear deal should be renegotiated or scrapped before the May 12 deadline, which is mandated by the Iran Nuclear Agreement Review Act.

“Bolton is a believer in the robust use of all instruments of American power,” and “perhaps the perception that Trump, Bolton and…Pompeo are willing to use these instruments will make it less likely they have to be used. (Ayatollah) Khamenei, Kim Jong Un, (Vladimir) Putin and others become more—not less—aggressive when they perceive American weakness,” Foundation for Defense of Democracies CEO Mark Dubowitz told the Wall Street Journal.

On March 29, 2018, Bolton visited the Pentagon. Mattis said, “I heard you’re actually the devil incarnate, and I wanted to meet you.” They both laughed and entered the Pentagon smiling.

On April 12, 2018, the Senate Foreign Relations Committee had a confirmation hearing for Mike Pompeo, who was vying to become Secretary of State.

On April 23, 2018, the committee forwarded the nomination of Pompeo to the Senate, after Republican Sen. Rand Paul finally voted in favor of him and Democrat Sen. Chris Coons agreed to say he was present for the vote. The end tally for the vote was eleven in favor, nine opposed, and one present, which enabled the committee to push Pompeo’s nomination to the floor.

Pompeo said during his April 12, 2018, confirmation hearing “I’m optimistic that the United States government can set the conditions for that [holding a summit] appropriately so that the president and the North Korean leader can have that conversation [that] will set us down the course of achieving a diplomatic outcome that America so desperately—America and the world so desperately need.”

On April 20, 2018, Washington welcomed Pyongyang’s surprise announcement that it would halt further testing of nuclear weapons and long-range missiles and forswear transferring weapons technology to other countries.

Kim Jong-un began to suspend nuclear and missile tests starting April 21, 2018, and he said he would close the site where the previous six nuclear tests were conducted. But the devil is in the details.

On April 23, 2018, Moon Jae-in sent a ten-member delegation to Pyongyang to begin preparations for an inter-Korean summit—the first in ten years and the first since Kim took over.

Former director of the CIA, Jim Woolsey, stated on June 17, 2015 (after he had left the agency), “If we cannot bring about a change of regime through the brave operations . . . [supporters of the National Council of Resistance of Iran] and their friends and allies in Iran and elsewhere, the only way to keep Iran and the mullahs themselves from having this kind of horrible power is war. I do not welcome it. I do not urge it. I do not wish it.”

It should also be noted that the major annual international rally of the National Council of Resistance of Iran (NCRI) was in Paris on July 1, 2017. During the rally, Maryam Rajavi, president-elect of NCRI, said: “The ruling regime is in disarray,” which fits with the theme of our piece, on the Middle East in disarray.

Pompeo’s prior comments open the door to regime change from within: “It is a theocratic regime that is looking backwards, instead of a regime that is looking forward to make the lives of their people better . . . It is my full expectation that you will see the Iranian people continue to revolt against this . . . These protests are not behind us.”

The ouster of Tillerson for Pompeo and the appointment of Bolton suggests disarray. But the truth is that this “crisis” creates an opportunity to advance American interests in the Middle East and Asia through coercive diplomacy.

Asia’s Disarray Declines as Action Shifts to Pyongyang and Tehran

In his latest book, A World in Disarray, Richard Haass, writes:

A large part of history over the past three centuries arose from the interaction between and among the major powers of the day. Competition and disagreement often led to conflict, at times on a scale and at a cost that dwarfed all else. This was certainly the case during the twentieth century, which was defined by two world wars and the Cold War, which arguably stayed cold mostly because of the stabilizing effect of nuclear weapons.

On April 26, 2016, candidate Trump outlined his “America First” doctrine for how his policy departed from former Secretary of State Clinton. Trump said, “My foreign policy will always put the interests of the American people and American security above all else.”

But Trump is evolving—as occupants of the Oval Office often do—and may come to appreciate former Secretary of State Condoleezza Rice’s defense of democracy in her memoir, Democracy: Stories from the Long Road to Freedom.

Walter Russell Mead’s review of Rice’s book in the New York Times on May 3, 2017, states, “Rice’s continuing defense of the democracy agenda will be much noted among Republicans seeking to come to terms with the implications of President Trump’s ‘America First’ approach to the world.”

With his new team, we expect Trump to become a globalist over time. Looming threats in Pyongyang and Tehran—partners in proliferation—leave few other options. The national-security trio favors remaining in institutions we built during the Cold War.

Despite the decline in tensions, because of the likely summit, the nuclear and missile threat from Pyongyang to Washington continues.

Trump’s resolve to participate in the summit with Kim, probably in June, and discuss his nuclear ambitions, raises the specter of what happens next.

On April 8, CNN reports of meetings between outgoing American intelligence officers and their counterparts in Pyongyang in advance of the summit. Preparation issues that still needed to be resolved at that time include where the two leaders should meet, who should participate in the summit, and the summit agenda.

The Washington Post notes on March 8, “American presidents have been wary of offering the Kim regime the validation of a leaders-level summit on the global stage.”

For those people who have doubts about Bolton, and there are many who do, consider a March 23 post in Foreign Policy written by Peter Feaver. He notes that “if you squint at Trump’s new national security advisor, you might see some silver linings.”

“Bolton’s hawkishness on North Korea is a strategic concern in the long run but could be a tactical advantage in the short run. If there is a diplomatic solution to North Korea’s nuclear problem—a big ‘if’— then it is more likely to be found with Bolton’s bad cop paired with Trump’s good cop,” if talks fail.

It looks like Bolton may be the “bad cop” who facilitates Trump’s coercive diplomacy.

The president wants Kim to verifiably give up his ballistic missiles and nuclear warheads. He wants denuclearization of the Korean Peninsula. And Trump will push Kim to incorporate political development toward democracy, as is the case in South Korea, if Kim, Moon, and Trump agree to a unified Korea.

Kim requires long-term negotiations with Trump to confirm him as a nuclear power on par with Trump, a unified Korea under Kim’s leadership, and funds for economic development. If neither Kim nor Trump obtains his asking price in talks, the likelihood of conflict that neither wants increases.

From Nationalist to Globalist

Presidents become globalists. Mead states that since 1992 Americans have rejected George H. W. Bush for Bill Clinton, who was critical of NAFTA and free trade; Obama promoted a less assertive policy in 2008 than Sen. John McCain in 2012.

Obama derided Romney’s warnings of Putin as America’s leading geopolitical foe. In 2016, Trump defeated Clinton, the globalist candidate. There is a pattern of electing the least globalist candidates in national elections, but governing involves different strategies.

Haass states that the Cold War stayed cold mainly because of stabilizing effects of nuclear weapons between the two superpowers. Also, it is wise to note that regime change from within is an alternative for Trump. The appointment of Bolton focuses too much on his writings using military action, but we have heard him many times an emphasis on internally-driven regime change.