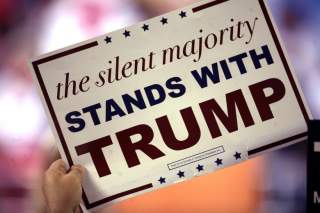 If anything underscored the uniqueness of Donald Trump’s campaign, it was his contention in Cleveland that Hillary Clinton is the puppet of big business. It was simply extraordinary to hear a Republican candidate for the presidency directly assail big business in populist tones as a threat to American democracy—and praise Bernie Sanders along the way, arguing that he “never had a chance” because the system is “rigged.” Instead of pivoting from his unorthodox stands, Trump went all-in last night.

The contrast with his poised daughter Ivanka was stark. She delivered a supple, personal appeal, trying to soften the edges of her father. She offered a testimonial to what she said was both his personal kindness and business acumen, calling him “the people’s champion.” She said he would push for college aid and equal pay for women, neither of which are traditional Republican stands, to put it mildly.

Donald Trump would have been probably have benefited from building on Ivanka’s remarks by offering some stories about his own upbringing and his struggles to achieve success. He didn’t. As effective as Trump is at manipulating the modern media culture, he does seem to flinch from unburdening himself personally. In this regard, Trump may actually be old-school. He won’t go there.

Still, his unflinching stand, his refusal to pivot, may prove politically effective even if it sets the teeth of the elites he keeps denouncing on edge. Trump, as Sam Tanenhaus regularly observes, did not create his movement. He is its creation. He couldn’t resist a little gloating at the outset of his speech, and was probably entitled to it, about the ease with which he demolished his Republican opponents and their incense burners in the media. Recall George F. Will’s assessment: “This year’s Republican field is the most impressive since 1980, and perhaps the most talent-rich since the party first had a presidential nominee, in 1856.” Since then, Will has severed his party membership.

Trump maintained his hard line on immigration, denounced Hillary Clinton as an agent of “destruction,” and presented himself as a law-and-order candidate in the mold of Richard Nixon. But his most significant line came towards the very end of his lengthy speech, when Trump declared, “I am your voice.” Given the somewhat meandering quality of his address, Trump would likely have been better off to have made this point earlier on. Indeed, to call it a point is, in a sense, to miss it.

At a moment when Roger Ailes, who probably did more to shape the modern conservative movement than any figure in recent decades, has been ousted from Fox, Trump’s statement may be even more pregnant than he realizes. With Ailes gone and the party elites unable to devise a coherent response to Trump, the New York mogul has the opportunity to reshape the GOP in his own image, which is what he is doing. The essence of Trump’s campaign is that he claims to speak for the forgotten man, a phrase first used, as Amity Shlaes notes in her recent biography of Calvin Coolidge, by William Graham Sumner, then appropriated by Franklin Roosevelt in 1932 during the depths of the Great Depression to describe those struggling even to reach the bottom rung of the economic ladder. Trump vowed to represent the “forgotten men and women of our country.”

Trump was no less gloomy in discussing the world abroad, presenting himself as the only figure who could right the American ship of state in a sea of new world disorder. He blamed most of it on Hillary Clinton. At the same time, he didn’t linger on his musings earlier in the day about the case for waving goodbye to America’s NATO allies if they fail to pony up for their own defense.

Some of the things that Trump didn’t say were also noteworthy. Trump was noticeably silent on social issues such as abortion. He even called for protecting gay rights. More evidence that this is not your grandfather’s GOP.

There can be no doubting that Trump is banking that a broader sentiment for change in America will propel him into the Oval Office. As the Los Angeles Times’ Cathleen Decker observes today, Trump’s speech “represented a high-risk bet: that a strong desire for change in November will defy the demographic and political tides that have defeated the last two Republican presidential nominees.” So far, Trump’s been playing a winning hand.

Image: Sign for Donald Trump at a rally in Phoenix, Arizona. Flickr/Gage Skidmore