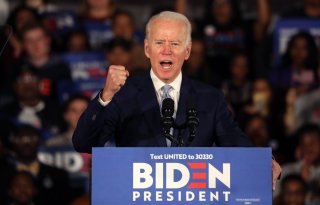 Yes, he can. Former vice-president Joe Biden won in a walk-in South Carolina on Saturday. The Democratic establishment, at least for a day, maintained the firewall that Bernie Sanders tried to douse with a shower of socialist rhetoric and millions in advertising. Sanders, who raised a whopping $46.5 million in February, is a formidable foe. But no sooner was Biden’s victory announced than a phalanx of Democratic grandees, including former Virginia Governor Terry McAuliffe, announced their backing of Biden who captured the lion’s share of the African-American vote in South Carolina.

At the same time, a number of candidates may drop out. All struggled to win non-white voters. Already Tom Steyer has ended his campaign. Pete Buttigieg is meeting with Jimmy Carter today and may terminate his run as well. Pressure will mount on Sen. Amy Klobuchar to do so as well to clear the field for Biden. Mike Bloomberg, who cratered in the past two debates, looks like a spent force, politically if not financially. The continued candidacy of Elizabeth Warren, who would likely sap votes from Sanders, is a plus for Biden. In the coming weeks, the pressure to back Biden to combat Sanders and avoid a Trump redux scenario from 2016 in the Democratic party will mount. The prospect of a democratic socialist at the head of the ticket doesn’t worry the Democratic establishment; it terrifies it.

As he heads into Super Tuesday, Biden may be in an ideal position. The media has already begun to burnout on Bernie. A new storyline, particularly one that involves a comeback, could hardly be more enticing. Biden provides it. The old pro who was shaky on his feet in the initial rounds summons up his inner spirit and knocks out his rivals. It’s made for Hollywood and, as it happens, Biden needs to score well in California and elsewhere to demonstrate that his campaign has legs.

Biden himself is milking the moment effectively. His victory speech suggests that he’s starting to master the role of the comeback kid. “For all those of you who’ve been knocked down, counted out, left behind, this is your campaign,” Biden said last evening in Columbia. “The press and the pundits had declared this candidacy dead. Now, thanks to all of you, the heart of the Democratic Party, we just won and we won big because of you. And we are very much alive.”

Biden has made it plain that he will attack Sanders head-on. For decades, pundits have speculated about a civil war in the GOP. But it is the Democratic party that may now experience it. In his speech last night, Biden suggested that Sanders is a mere interloper, while he represents the old-time faith. “If Democrats want a nominee who’s a Democrat, a lifelong Democrat, a proud Democrat, an Obama-Biden Democrat, join us,” Biden declared. “We have the option of winning big or losing big. That’s the choice.” The binary choice that Biden laid out seems to reflect the wishes of the bulk of the party, at least if opinion polls are anything to go by. They indicate that primary voters do not want a radical shift in policies but something closer to what Biden exemplifies.

For Donald Trump, the resurrection of Biden is further bad news. Biden remains the most potent candidate that the Democrats can field against him, someone who is a political moderate and can make a serious run at the rust belt states that hoisted Trump to victory against Hillary Clinton in 2016. He can try and gin up the Burisma scandal but it is likely to be overshadowed by the coronavirus.

Trump’s public appearances have not inspired confidence as he consistently tries to downplay the seriousness of the virus and to tout the stock market as a great investment. Yet the impact of the virus on global economic growth is serious and likely to provide an opening for the Democrats. The frothy economy that Trump was relying on for reelection could well head into a recession. The Washington Post, for example, reports that both Germany and Britain are discussing the possibility of placing entire cities under lockdown. This contingency can also not be precluded for America. Even if it doesn’t come to that, the global slowdown is certain to impinge upon American economic growth, something that Trump appears unwilling to acknowledge publicly, preferring to blame the Federal Reserve, the media, anyone else, for an economic slowdown. Given that Trump has already passed massive tax cuts, he will be unable to provide much of a stimulus for an economy that was already heavily and overly reliant on trillion-dollar deficits for growth.

It is hard to escape the feeling that a new era of economic and political turbulence looms at home and abroad. The coronavirus may simply prove to be the detonator that causes an already fragile global economy to implode. Biden will seek to capitalize on the chaos by presenting himself as a revenant from a better era, while Sanders attempts to upend the old order even further. The clash between Biden and Sanders could prove to be almost as ideologically volatile as the one that ensues when one of them faces off against Trump in the fall.