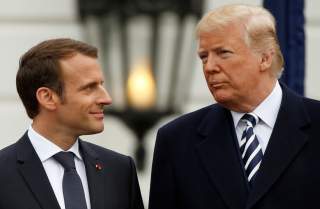 Who could blame Donald Trump for leaving the G-7 early?

Why would he willingly submit to a dismal dressing down by Justin Trudeau and his finger-wagging troupe of green extremists?  They wanted him squirming in his seat while they made him out to be the Great Global Ocean Killer. It was a set-piece of political theatre and Trump, the world’s now-acknowledged master of that genre, was having no part of it.

Compared to all that, playing a 007-ish hero sipping Singapore Slings with Kim Jong-un, a live-action mass murdering villain in the real world, must have seemed like Ferris Bueller’s Day Off.

A day off, too, from more schoolmarmish virtue-signaling by Angela Merkel and her star pupil, Emmanuel Macron, angry at Trump for blocking their factories from churning out new state-of-the-art products to prop up another group of evil thugs in Tehran.

James Bond’s “Q Branch,” though, never provided weapons as powerful as those deployed by President Trump against his G-7 counterparts. U.S. tariffs on steel and aluminum imported from the other G-7 countries, as well as on NAFTA partner Mexico, are exceedingly dangerous and subject to economic laws of unintended consequences.

Tariffs inflict blunt-force trauma; they are not the smart and highly accurate weapons of the Bond movies. They can back-fire on the American economy. Indeed, they already are.

We can decry the flawed economic theory behind this Peter Navarro-inspired trade war strategy, but there is no debate that if this protectionist gamble succeeds, it will be a blockbuster hit in the Upper Midwestern industrial states that put Trump into the White House.

So what are Agent Trump’s goals?

Trump knows that “The World As It Is,” the world he is seeking to remake through this strategy, is the world Barack Obama made, a world where America was to be “transformed” into a country with more refined European sensibilities.

And that world is best exemplified by mercantilist Germany, birthplace of those wealth-redistributing Bismarckian bureaucratic leviathans that now populate OECD countries. Their unfunded liabilities threaten to capsize the ships of all the G-7 states.

These budget deficits cannot be solved by higher taxes. Trump should insist that, instead, G-7 leaders and the Franco-German led EU commit to working together to reduce them by curbing future entitlements.

Shaking up the EU and encouraging a lighter, less Brussels-centric regulatory burden would also give a boost to Brexit, which will also be helped by prospects of a U.S.-UK free trade agreement.

Moreover, Trump should use his leverage to secure increases in G-7 defense spending to share the NATO-based military burden with the United States to maintain the rules-based international order so that global commerce can proceed apace.

Maybe Trump will even help G-7 voters see the light and replace their current crop of sterile technocratic leaders with a new generation of free-market commanders in the mold of Margaret Thatcher and Ludwig Erhard.

The American tariff weaponry, though, must be holstered and returned to the arsenal as quickly as possible. For example, thousands of U.S. businesses of all sizes are already feeling the pinch of higher prices for steel inputs. If they are not quickly reversed, the tariffs—and the inevitable retaliatory tariffs from our G-7 partners—will bite ever deeper into the splendidly humming American economy.

Meanwhile, though, as long as Trump is in smashing pumpkins mode, he should also blow up the G-20 heads of state summit. It was only elevated to the head of state level when the George W. Bush administration needed cash-cow China at the table after the 2008 financial crisis.

Now, though, unfair trade practices by Xi Jinping’s government has earned China the same opprobrium the G-7 heaped on Vladimir Putin when it kicked Russia out in 2014 after the Russian invasions of eastern Ukraine and Crimea that included the shooting-down of a commercial airliner.

China’s aggressive “China 2025” policy should not be rewarded with a seat at the G-7 table, and Trump can deliver another message to Beijing by diminishing China’s stature at a downgraded G-20.

Much like James Bond’s Caribbean sailboat at movie’s end, Navigator-in-Chief Trump must steer the American economy away from the dangerous shoals of a global trade war.

The sooner he can declare the national security-based tariff emergency over, the sooner America and her G-7 shipmates can set sail for calmer, more bounteous waters.

James M. Roberts is a research fellow in The Heritage Foundation’s Center for International Trade and Economics.