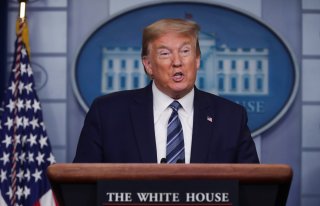 President Donald Trump tweeted Monday night that he would be instituting a temporary halt on new immigration due to the economic calamity caused by the coronavirus:

This led to much agitated speculation, by both supporters and detractors, about the nature of this move: "The desperately needed immigration moratorium had finally arrived!" Or, alternatively, "Drumpf reaches Peak Hitler by barring brown bodies!"

The fuss turns out to have been unwarranted. The measure on its own will have little effect. In his daily coronavirus press briefing Tuesday afternoon, the president devoted a few sentences to the specifics of the order, which had still not been released to the public at that point, before moving on to disease-fighting issues.

The president explained his reasons for the immigration action:

"By pausing immigration, we'll help put unemployed Americans first in line for jobs as America reopens. … It would be wrong and unjust for Americans laid off by the virus to be replaced with new immigrant labor flown in from abroad. We must first take care of the American worker."

The sixty-day renewable order will delay green card processing for people other than spouses or children of U.S. citizens, but would not apply to the various visa programs that import hundreds of thousands of foreign "temporary" workers each year. Since most of the one million or so people annually who receive green cards (i.e., lawful permanent residence leading to citizenship) are already living and working in the United States under some other status, the actual number of people kept out of the U.S. labor market by this temporary pause is likely to be relatively small.

This isn't to say there hasn't been a virus-related slowdown in immigration. With travel from China and Europe shut down for now, the borders with Mexico and Canada closed to non-essential traffic at least until May 19, refugee resettlement (mostly) suspended for the time being, and State Department consular offices abroad mostly closed, the number of foreigners entering the United States is certainly down.

That means as a practical matter relatively few of the guest workers whom the new executive order ignores would get in anyway. But some will. While consular offices are closed, the State Department has pledged to expedite the entry of H2 visa workers by waiving the required personal interviews; in other words, visas will still be issued to these guest workers without their having to appear in person. Some H2 visas go to farmworkers, whose admission has been deemed a "national security priority". The virus has exposed what a dangerous vulnerability this reliance on foreign labor to harvest vegetables is, but fixing that vulnerability will take time. In the meantime, the plants are in the ground now, and need to be tended, so this exception, while galling, is understandable.

But there's a non-agricultural side to the H2 visa program as well, and there is no security rationale for it. The H-2B visa (as opposed to H-2A for farmworkers) is used to import landscaping crews to tend golf courses, as well as forestry workers, hotel maids and waitresses, and others. While the "Jobs Americans Won't Do" charge is exaggerated with regard to farm labor, it at least has some plausibility there. But to claim that some of the millions of jobless Americans wouldn't be willing to do landscaping or housecleaning is laughable.

The larger problem with the omission of guest workers from the temporary pause in immigration is that they will be able to flood in again as soon as the borders reopen. Once businesses get back to work and consular offices start seeing applicants again, the flow of guest workers would resume just as the millions of Americans will be trying to reboot their lives. Re-absorbing the millions of Americans dislocated by the virus into a labor market very different from the one they departed is going to take years, not months. Halting guestworker programs will be necessary to meet the president's no doubt sincere desire to "put Americans first in line for jobs." Two examples.

The H-1B visa is for skilled workers, most of them in information technology. Despite tendentious "best and brightest" rhetoric by tech lobbyists, the H-1B visa is simply a cheap-labor program designed to deliver a controllable workforce doing routine IT work. In fact, it has been used extensively to replace American IT professionals with cheaper foreign, usually Indian, workers—and the fired Americans are almost always required to train their less-skilled foreign replacements as a condition of severance. Disney got a lot of unwanted attention for this in 2015, but nothing changed, because, notwithstanding much congressional fulmination, the law specifically allows Americans to be replaced by cheaper H-1Bs. Failing to pause this program before the next cohort of foreign workers arrives October 1 would make a mockery of the president's claim to want to preserve American jobs for American workers.

The Summer Work Travel Program is a different example of a guestworker program that needs to be stopped in anticipation of the economy's reanimation. The reality behind this program is clear from the title of a report on it a few years ago: Cheap Labor as Cultural Exchange. More than 100,000 college students from abroad, mostly from Europe, come to take a variety of summer jobs, the point being to learn about America. But with millions of young people certain to be jobless later this year, is it really defensible to import Ukrainian lifeguards and Turkish housekeepers?

There's still time for the president to hit the pause button on guestworker programs before the start up again in a big way. At Tuesday's press conference, he referred to a possible second executive order on immigration to address issues not covered by the first one. If President Trump truly intends to "first take care of the American worker," a follow-up measure like that is imperative.