Trump's Immigration Speech and the Battle over What America Means 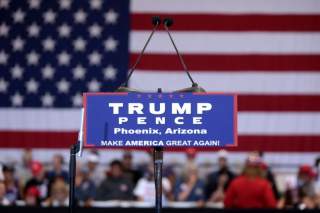 To understand the politics of our time, and the emergence of Donald Trump, it might help to look at those periods in American history, aside from today, when the country’s politics turned intense and nasty. A historical survey tells us that those times of political intensity and acrimony have emerged when the country faced major “definitional” issues—that is, issues that get to the heart of the country’s national definition.

The early decades of the Republic—the era of those pesky pamphleteers—were such a time. The country struggled to determine if it was going to embrace Hamilton’s Federalist concept of centralized power or Jefferson’s agrarian principles of small government and “strict construction” of the Constitution. It was a time of intense, truculent politics as the country struggled with these major definitional questions.

Similar definitional issues reemerged in the Jacksonian era, and again the country’s politics turned ferocious and excessive, all the way through the presidency of James K. Polk. Throughout that time, from Jefferson to Polk, the country settled its definitional dilemma by essentially embracing the Jefferson-Jackson-Polk philosophy. But not without bitter political struggles characterized by meanness and scurrility. Both Jackson and Polk were subjected to votes of censure in Congress, and few presidential campaigns in our history can match the 1828 contest for slashing personal attacks.

In the 1850s the slavery question exploded upon the political scene, and it’s difficult to conceive of a more profound definitional question than whether the country was going to sanction and practice slavery or outlaw that institution for all time. So intense were the politics of that definitional issue that they couldn’t be adjudicated through Constitutional means. Only war could settle the matter.

Other times of particular political intensity included the Progressive era, when the scope of government became a major national issue amid signs that industrialization was driving a wedge through society; the early Great Depression era, when socialism, Communism and capitalism vied for respectability; and the McCarthy era, when the country struggled with its global role.

By contrast, consider the relatively serene politics of the 1920s, the 1950s, and the 1980s–1990s, when times were good and the country’s identity was not in play as a major national preoccupation.

Now it is in play, and nothing reflects that reality more starkly than the immigration issue. For years the country’s elites have struggled to craft a solution to the issue that would combine a commitment to a border closure with some form of indemnity for illegal immigrants already in the country, protecting them from prospects of deportation. But they could never succeed, in part because they lacked credibility on the question of border security. The so-called comprehensive solution proved elusive because large numbers of Americans didn’t trust the elites to actually live up to their end of the bargain.

And yet the issue never really got joined in definitional terms because the elites controlled the dialectic of debate. For those who raised questions about how many immigrants we should allow into the country, or who they should be, or the impact on the national heritage, or the challenges of assimilation, the cry went up that those raising such questions were bigots or xenophobes. Few were willing to risk the name-calling that would ensue if they raised such issues.

Then along came Donald Trump. In stark language, even at times crude language, he joined the issue and made it a definitional one. Already it had been generating political intensity and acrimony, but now the definitional outlines became stark and unavoidable.

Let’s begin with what we might call the elite view, probably most crisply captured by former Florida governor Jeb Bush when he suggested illegal immigrant crossings should be seen partly as “an act of love” toward family members whose lives would be enhanced by coming to America. Thus do we see, encased in this view, a primary focus on the sensibilities, dreams, hopes and goals of those who enter the country illegally. Then there is the “catch and release” policies when illegals are picked up near the border. There are the “sanctuary cities” dotting the American landscape, refusing to cooperate with federal efforts to enforce immigration laws. There are the initiatives of various states to ensure illegal immigrants can get driver’s licenses and access to governmental support programs. There is President Obama’s effort to grant amnesty to millions of illegals through executive action, bypassing Congress.

Such attitudes and actions bespeak a fundamental reality of the elite view: It is essentially an open-borders view. There are the requisite denials, of course, but that’s what it adds up to. In his fiery speech on the subject in Phoenix on Wednesday, Trump said the immigration reforms touted by elite opinion makers adds up to “amnesty, open borders, and lower wages.”

The speech constituted a declaration of political war on that approach. He spoke of national sovereignty and “our right as a sovereign nation to choose immigrants that we think are the likeliest to thrive and flourish here.” He reiterated his view that a nation without borders isn’t really a nation at all. He expressed sympathy for the “concerns of working people” related to “jobs, wages, housing, schools, tax bills, and living conditions.” These, he said, are “valid concerns” harbored by “decent and patriotic citizens.”

Thus did he reject the idea that people with anxieties about uncontrolled or what they consider excessive immigration are somehow flawed as citizens, with tinges of racism or xenophobia. He countered that argument indirectly when he declared he would “talk honestly and without fear” on the subject. That’s something of a new development on this issue.

Trump suggested that the elites see the legal status of illegals as the paramount issue. He rejected that in favor of what he considered paramount: “the well-being of the American people”

This is indeed a definitional issue for America, and thus it isn’t surprising that it unleashes so much anger, hostility and acrimony. The elite view’s adherents don’t see borders as paramount because they aren’t particularly nationalist in their outlook and because they are driven by what they consider the sanctity of ethnic and racial diversity. Besides, their pursuits are underwritten by the big banks and financial institutions, whose monetary returns are enhanced by the free flow of goods, money, services, ideas and people across borders.

The Trump view is essentially a nationalist view. When he says “America First,” he is expressing a sentiment from which all the rest of his views and positions flow—insisting on reciprocal trade policies, terminating nation-building and regime-change initiatives abroad, building up the military, taking better care of veterans, and tightening up on immigration. It’s this latter push that truly constitutes a redefinition of America from the identity embraced by the open-border elites.

And so the lines are drawn—and will continue to be drawn irrespective of the outcome of this election. The definitional clash is afoot. The future of America hangs in the balance.