Trump's Jerusalem Move Could Provide a Pathway to Peace 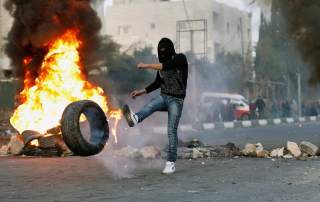 The view has set in among Westerners that President Donald Trump’s choice to recognize the Israeli capital in Jerusalem isolated the U.S. diplomatically, cost Washington its role as an Israeli-Palestinian mediator and damaged prospects for a peace settlement overall. The evidence: violence in Palestine and Iran-dominated Arab enclaves, protests and official condemnation in other Muslim countries and a counter-resolution at the UN General Assembly.

Here in Morocco, many observers hold a different view: Whatever the president thought he was doing, both the decision and its fallout exposed a political dynamic in the region that holds new possibilities for an eventual settlement. While the position of foreign powers remains essentially the same, Arab countries, historically a guarantor of strategic depth for Palestinian rejectionist forces, are increasingly a bastion of support for compromise.

After the White House declaration, most Arabs saw continuity in foreign powers’ stance as either seekers or throttlers of peace. Iran showed off its leadership of the rejectionist camp by ordering proxy riots in Syria, Lebanon, Yemen and Iraq. Western European powers, while opposing the United States at Turtle Bay, clarified through accompanying statements that they were simply reaffirming the unresolved status of Jerusalem’s totality—a view with which the American president’s statement essentially concurs. Thus the difference between Washington and its major European allies, in some ways at least, remains a matter of emphasis. Most other votes against Washington came foreseeably from Muslim-majority states and the broader anti-Israel chorus. If there was any real departure, it lay in the thirty-five abstentions, which included Muslim-majority Bosnia-Herzegovina and several other EU members.

As to the U.S. imprimatur as mediator in Israeli-Arab negotiation, talk of its demise is unfounded. Arab leaderships have always perceived Washington as a essentially pro-Israel power. It earned its chair at the negotiating table not by projecting neutrality but by extending profound military and economic leverage—toward Israelis, Palestinians and the broader region. It can only lose its role as a regional broker by losing its status as a global power.

The true political departure in recent weeks lay within the Arab region, in that fallout from Trump’s statement exposed the so-called “rejectionist forces” in Sunni-majority Arab countries as a paper tiger. Aside from Iranian-occupied territory and Palestine, protests were relatively modest and short-lived—even in states like Libya, where the central government lacks the teeth to suppress public assembly. This was Islamists’ golden opportunity to reclaim relevance after the bruising counter-Islamist backlash that followed the Arab Spring. Yet they appeared unable to muster, let alone sustain, a mass turnout for their “days of rage.” And where were the professional syndicates of the Arab Left, which for decades had allied with Islamists under the banner of “resisting normalization” with the Jewish state? For the most part, they made their show of force in the op-ed pages of pan-Arab dailies and on the TV squawk box.

This weak showing matters greatly to prospects for peace—even with respect to Arab countries like mine, geographically remote from Israel and Palestine. For decades, in much the way Israel leaned diplomatically on its American ally, Palestinian rejectionists looked to the expanse of Arab territory as their political and strategic depth. It became a truism that even if Palestinians sought compromise on Jerusalem, the region would never allow it. Arab leaders, when called upon to help broker a settlement, cited pressures from their own society as their primary impediment. Now Arab societies have given their leaders and the world a preview of how minimally the region would convulse in the event of a future renunciation of Palestinian maximalist demands. Those Arab leaders disposed to press for compromise can feel assured—and the rest can no longer as credibly blame the population for their own intransigence.

It remains unclear, from an Arab vantage point at least, how the Jerusalem declaration would influence the readiness of Israelis to compromise on settlements in the event Palestinian concessions on Jerusalem and refugees were forthcoming. Sadat’s historic visit to the Knesset—itself a recognition of Israel’s capital in west Jerusalem—showed that a magnanimous Arab gesture can turn Israeli hawks into doves. Smaller gestures have been arriving lately, in the form of calls for peace in Arab media and publicized visits to the Jewish state by private citizens of Saudi Arabia and Bahrain. Opinion research on the domestic impact of these visits does suggest that they modestly thaw hardened views within the country.

Arab supporters of a regional peace, myself included, will continue to act on the belief that Arab conciliation begets Israeli conciliation. With this principle in mind, we see the outcome of the Jerusalem controversy as a sign that more is possible.

With respect to prospects for bridging public opinion inside Israel with that of its many neighbors, the potentialities of my own country bear highlighting. Morocco was once home to 265,000 Jews. During the Second World War, together with Jewish refugees from Europe who found a haven in the country, they were effectively shielded from the Nazis by Sultan Mohammed V, even under the country’s occupation by the Nazi-allied Vichy government. Most Moroccan Jews ended up in Israel, where today, together with their offspring, their numbers exceed one million. Each year, along with thousands of Israeli tourists including, political Israeli figures of Moroccan stock sometimes visit the country. In their public statements, they evince pride in their Moroccan ancestry, and pay homage to King Mohammed VI’s official status as a spiritual leader to Muslims and Jews alike. Our king also chairs the “Quds Committee”—a pan-Arab body dedicated to the city’s well-being. His response to President Trump’s statement was, among those of other Arab and Muslim heads of state, particularly thoughtful. In a region where denial of Jewish history in Jerusalem has become widespread, the king noted the profound importance of the city to people of all three monotheistic faiths, and called for a solution to the conflict that would guarantee the rights and security of everyone. Moroccans hope that all parties, near and far, will address the city’s needs in the spirit of this statement. We also hope that our country can help foster a eventual settlement.

Ahmed Charai is a Moroccan publisher. He is a board directors of the Atlantic Council and an International counselor of the Center for a Strategic and International Studies and an Advisory Board of The National Interest Center in Washington.