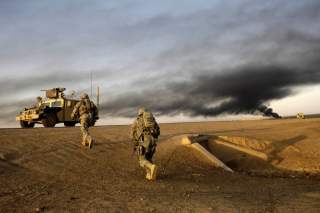 The Trump administration has performed a variety of policy somersaults in the Middle East. One day it opposed intervention in Syria. Then it intervened. When it came to Israel, candidate Trump pledged a neutral policy. Then, as president, he embraced Israel for a few weeks before returning to a more detached approach. Where will it all head?

Today the Center for the National Interest hosted two eminent Middle East experts to discuss the new administration’s options and outlook in the region. Philip Gordon, now a senior fellow at the Council on Foreign Relations, was Barack Obama’s White House coordinator for the Middle East, North Africa and the Gulf Region. Before that, he served as assistant secretary of state for European and Eurasian Affairs. Michael Singh, now the managing director and Lane-Swig Senior Fellow at the Washington Institute for Near East Policy, was senior director for Middle East Affairs in George W. Bush’s National Security Council. Before that, he served as special assistant to Secretaries of State Condoleezza Rice and Colin Powell. Geoffrey Kemp, the Center’s senior director for regional security as well as a former special assistant to Ronald Reagan and NSC senior director for Near East and South Asian Affairs, moderated the event.

Gordon pointed out that if you set out to find a coherent view from Trump in the region, you will not find it. Trump has pivoted and changed stances on numerous issues in the Middle East over the past decade. He has been steadfast on one point in particular though—the destruction of ISIS. Trump has been largely steady on Iran, but it is not clear if he understands what exactly is in the Iran Deal. He has also continually said that the United States will work with authoritarian regimes if it serves U.S. interests. Gordon also noted that there are fundamental inconsistencies even in Trump’s consistent approaches. It is not possible to defeat ISIS, be tough on Iran and avoid expending blood and treasure in the Middle East; there is an inherent tension. It is also difficult to say you want to contain Iran and fight ISIS at same time; Gordon argued that losses for one faction help the other. Trump could possibly contain Iran and defeat ISIS, but cannot accomplish both goals without a major commitment to the region.

In the end, Gordon indicated that Trump’s Middle East policy is less different from his predecessors than he might like to acknowledge. During the campaign, Trump implied that he would behave in a different fashion than Obama. But the Iran Deal still stands, even as Trump rails against it. If one were to look at actions in the region, it would be difficult to tell there was a new president. Gordon also said that while there are some differences, the real news three months in is that there has not been tectonic change. He emphasized, however, that

Israel has expressed some reserved criticism, Gordon noted, due to Trump’s unpredictability. Although the administration has been quite pro-Israel thus far, it is unclear if Trump will give Prime Minister Benjamin Netanyahu a green light to do as he pleases. Risk reduction and accommodating reality are the main pillars of the administration, something that many leaders in the Middle East are pleased to hear. At the same time, while there is a new sense of optimism, Gordon warned that the region has a way of “taking presidents where they do not want to go.”

Michael Singh noted that the Trump administration, not necessarily Donald Trump, is formulating Middle East policy. While Obama micromanaged foreign policy with laser-like attention, Trump seems more focused on domestic issues. In his view, Singh thought that foreign policy was less about official edicts and more about reacting to events that happen in the world, in addition to the administration's ideology. Singh believes that ideology is an important consideration since “the lens you see the world in makes a difference.”

When people talk about the Middle East, they see it as shambolic, but Singh posited that it could get far worse. He thought that Jordan’s continued stability is nothing short of a miracle and that it is surprising that Saudi Arabia is holding up as well. After all, a dollar in prevention is better than a dollar spent in intractable conflicts. The Arab Spring, he said, was not the cure-all that it was hoped to be. “Due to weak state identities but strong supranational identities, a problem in one place can quickly spread to other areas” Singh noted.

Although ideology is important, it is tough to determine to what this administration aspires. Overall, the White House has been more cautious and successful than many have anticipated. The strikes on Syria after the chemical weapon attack will probably have a deterrent effect and reinforce the taboo on employing such munitions.

There is a noticeable divide in the administration between internationalists and those who seek more restraint. Internationalist sentiment seems to be winning in the White House. It also does not seem as though the Middle East is a major source of contention between the two camps. Therefore, the region, at least initially, is the main focus of the Trump administration.

Trump’s devotion to destroying ISIS, Singh observed, is congruent with campaign rhetoric. But what can the United States do besides deploy more troops to Syria? Trump wants to take a new look at the tension between the Turks and the Kurds and who to support. Washington could perhaps work more extensively with Ankara in the Raqqa campaign. Singh cautioned against conflating strategy and tactics.

The real question is: what happens after Raqqa falls? There is no game plan in eastern Syria, since there is no one to control the region once ISIS is gone. In contrast, the Iraqi government could establish authority after evicting ISIS from Mosul. The United States would not want to see Bashar al-Assad or Iran fill the power vacuum.

Singh suggested that Trump is working to reinvigorate alliances in the Middle East. Trump met with President Abdel Fattah el-Sisi and offered praise, in addition to congratulating Recep Tayyip Erdogan on his referendum success. The peace process is also a major concern for Trump, but every president since Jimmy Carter has made it a priority.

The blunt truth is that a new bipartisan platform for Middle East remains elusive. America needs a strategy that will enable the region to solve its own problem. Until then, the United States is likely to continue lurching from one policy to another in the Middle East.