Trump's Nationalism Was MIA During the State of the Union Speech 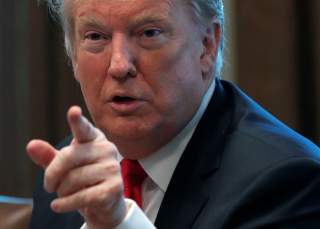 Donald Trump’s State of the Union speech, which called for “a new era of cooperation,” had a homiletic character to it. Earlier in the day, as the New York Times reported, Trump had called Joe Biden “dumb” and Senator minority leader Chuck Schumer “a nasty son of a bitch.” Now, on Capitol Hill, Trump performed a U-turn.

He evoked America’s past triumphs, celebrating members of the greatest generation and honoring astronaut Buzz Aldrin, and called for unity. The members of the audience that he called out to were uniformly impressive, from a little girl suffering from cancer to a police officer who risked his life to save worshippers at the Tree of Life synagogue in Pittsburgh. The most moving moment came when Congress sang “Happy Birthday” to a survivor of the Tree of Life shooting.

For his part, Trump never offered a bold vision—the nationalist, anti-globalist message of his campaign and inaugural address was almost completely absent. There was no theme that set the stage for the 2020 campaign beyond vague assurances that the economy is thriving and that America will never become socialist. Perhaps most notably, the phrase “America First” didn’t even appear until the very end of his address. Instead, he bragged that he had managed to secure “$100 billion in defense spending from our NATO allies. They said it couldn’t be done.” The cold, hard truth is that Trump offered no audacious initiatives, no explanation for how he would build a wall.

From the outset, the question hovering over his speech was whether America can create an “amazing” new life in the twenty-first century that Trump spoke about, including making the middle class “more prosperous than ever before.” He offered numerous references to the heroism of World War II veterans, alluding to the liberation of Dachau by American soldiers, though he never mentioned the fact that Russia bore the brunt of the fighting against the Nazis on the eastern front and that it liberated many of the concentration camps, including Auschwitz.

Consistent with his emollient approach, Trump said, “We must reject the politics of revenge.” Instead, “compromise” and a focus on the “common good” is necessary. “Together we can break decades of political stalemate,” he declared.

At the same time, Trump sought to defend his immigration policies. He spoke of sending an additional 3,750 troops to the border and called illegal immigration “a moral issue.” In this regard, Trump rehearsed the lines he has employed before about sex trafficking and smuggling, deeming it “modern day slavery.” He focused on the presence of MS-13 in some twenty states, arguing that until “we secure our border they’re going to keep streaming right back in.” He defiantly declared about a wall, “I will get it built.” But how?

When it came to foreign policy, his most audacious statement was that “Great nations do not fight endless wars,” a signal that he continues to seek to exit Syria and Afghanistan. But he only treated relations with Russia and China cursorily. “We really have no choice” but to repudiate the INF treaty, he said. His statement about where America is headed on arms-control was pure Boltonism. “We will outspend and out-innovate all others by far”—in essence Trump was threatening a new arms race with China and Russia.

At the same time, he painted a rosy picture of events in North Korea, stating if “I had not been elected president of the Untied States we would be in a major war with North Korea”—an outlandish statement given that previous American presidents have all viewed the prospect of a fresh land war in Asia with horror. A second summit in Vietnam, we were told, would go a long way to solving any remaining difficulties with Pyongyang. Meanwhile, Iran, which “does bad, bad things,” remains a target of his ire even though it has not developed nuclear weapons in contrast to North Korea.

Trump’s peroration was that “Our most exciting journeys still await.” But he never said how he would embark upon them.