Trump's Next Moves After Firing Comey 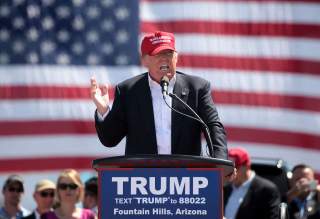 The Trump administration has many enemies, but its most dangerous is its own knack for self-harm. James Comey had earned his dismissal as FBI director many times over. Yet somehow the White House found the exact moment to fire him that would inevitably make him look like a victim. The day before President Donald Trump dropped the axe, progressives themselves had been calling for Comey’s head over misstatements he made about how many classified e-mails Huma Abedin had shared with her husband, Anthony Weiner. Since election night, Democrats have blamed Comey and the FBI’s investigation into Hillary Clinton’s private e-mail server for electing Trump in the first place. That’s a fantasy—voters in Michigan, Wisconsin, and Pennsylvania had a surfeit of reasons, beginning with economics and culture, for preferring Trump to Clinton. But the myth shows what little respect Comey enjoyed among the president’s foes.

Now he’s a martyr. If Comey wasn’t actually fired over the bureau’s investigation into the Trump campaign’s dealings with Russia, the timing was certain to make it look that way no matter what. The dismissal comes only a day after the much hyped testimony of another fired official, former acting attorney general Sally Yates, before the Senate panel examining Russia’s role in last year’s election. In politics, as Trump more than anyone should know, appearances are often tantamount to reality. That worked to his advantage in last year’s campaign. It’s working against him now that he’s in office, and never more so than in firing Comey.

Despite Democrats’ charges that the FBI director was hard on Clinton and soft on Trump, Comey was an Obama appointee who had no reason to show favoritism to the Republican nominee in 2016, and he was not easily dismissed as a stooge once the new administration took office. Comey didn’t have to prove his independence. His successor won’t be so lucky: he or she will have to be acceptable to Trump (and, as importantly, his advisers) to get nominated, but to be confirmed and remain credible in office, the next director will have to demonstrate a willingness to act in ways that make the president uncomfortable. The confirmation hearings promise to be a bloody spectacle.

And at this point, thanks to Comey’s termination, the pressure to appoint an independent prosecutor to delve into connections between Trump and Moscow may prove irresistible. Certainly the political price for refusing to appoint one has suddenly shot up for Republicans. Until now, Democrats had overplayed their hand, attracting much media interest but little of the public’s attention with insinuations that Trump is beholden to Russia. Carter Page is hardly a marquee name, and even Michael Flynn’s improprieties were hardly the stuff of popular thrillers. But firing the FBI director in this fashion is something else—everyone knows what that means. Or at least, what it’s supposed to mean.

Trump could have waited for a better time to dispose of Comey. But timing in general is something this administration has struggled to get right. Some decisions, like the executive order limiting travel from certain Muslim countries, went ahead with undue haste, and predictably encountered setbacks. The rush to pass the first version of the AHCA legislation to replace Obamacare is another prime example. Yet other matters however have been protracted unnecessarily, such as the dismissal of Flynn as national security adviser. Comey could arguably fall into either category: is the problem that he was fired so suddenly now or that Trump let him hang around after the new administration moved in? Clearly Trump and his staff prefer to have their own people in every key position, and understandably—they see the entire political establishment and professional civil service as, at best, clinging to old, failed habits and, at worst, working actively to undermine this president. The paranoia has some basis in reality: as the joke goes, “just because you’re paranoid doesn’t mean they aren’t out to get you.” But his somewhat justified paranoia didn’t do Richard Nixon any favors in any favors in the end, and it’s not working out for Trump, either.

So far we have only seen phase one of the Trump administration, a phase that has been characterized by reliance entirely upon factions in the GOP and Trump’s own family and ideological following. The president has loyally checked off the boxes of Republican conservatism, with a Supreme Court appointment that satisfies Antonin Scalia’s admirers and with the controversial Obamacare replacement moving forward as quickly as the White House and Republican leadership can push it. Trump has tried to deliver for his own base of immigration opponents, too, with his executive orders to restrict travel. But Trump has so far ignored the economically frustrated Midwesterners and Rust Belt workers who played a pivotal role in getting him into power. The president has not shown any concern to govern from the center—something that ideologically charged presidents before him also resisted, but ultimately had to accept.

Trump will be forced to accept it in the wake of next year’s midterm elections, after which Congressional Republicans will be weaker even if they hold onto their majority. But he would be well advised to broaden his political strategy immediately—not to jettison the conservative and right-wing forces he has to rely on, but to make sure that he has other sources of support, too. Trump has enemies who will use a special prosecutor, or even conceivably the new FBI director, as a reason to badger him every day he remains in office. But he has to replace Comey, and he may not be able to avoid appointing an independent counsel. So now is the time for Trump to get out ahead of his enemies, if he wants to survive as anything more than a shell of a president (if that). He has to think out his next moves carefully and put that deal-making talent of his to use. There are some battles he may not be able win, but he can chose how he loses them. In the wake of Comey, that’s the question before him.