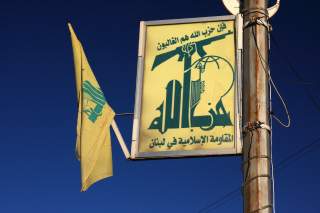 On his first trip to the Middle East last month, President Donald Trump had one overriding theme: it’s time to get tough on Iran and its proxies throughout the region. No doubt, Tehran’s behavior in the region is deeply destabilizing; the question is how best to contain malign Iranian actions like support for terrorist groups. Trump appears to want unrealistic swift and easy military solutions. Ironically, that focus on hard power is leading the administration to undermine the elements of statecraft that the United States will need to succeed.

Nowhere is this more clear than in Lebanon, where Trump’s rhetoric and proposed budget cuts portend less U.S. support for the Lebanese institutions most directly confronting Hezbollah—Iran’s local proxy and a source of Iran-backed forces fighting for Bashar al-Assad against the United States and its allies in Syria. The impulse to get tougher on Hezbollah is directly contradicted by Trump’s budget, which ends foreign military financing for the Lebanese Armed Forces and other investments in Lebanon.

This is ironic given that Trump is apparently spoiling for a fight with Hezbollah. The Pentagon’s preliminary plan to defeat ISIS remains classified, but it reportedly calls for an expansion of operations to target other groups, including Hezbollah. In Saudi Arabia, the president singled out the group as among the terrorists that must be driven “out of this earth.” The CIA has just appointed a new chief of Iran operations who was intimately involved in killing the international operations chief for Hezbollah in 2008.

But, as with President Trump’s Iran strategy more broadly, none of this adds up to a comprehensive strategy that integrates diplomacy and aid with force to achieve a clear outcome.

In Lebanon, a smart approach would confront the reality that Hezbollah remains a dangerous terrorist group, but also a major force in Lebanese politics. The current government assumed office with Hezbollah’s support after a two-year struggle to choose a president. Efforts to disarm Hezbollah in line with UN Security Council Resolution 1701 have fallen short of the mark. It cannot simply be cut out the Lebanese body politic like a tumor without tilting the country back into open conflict. We both travelled to Lebanon recently and believe a nuanced approach can have a positive impact.

The first step will be to get any new financial sanctions right. Congress is reportedly working on legislation to tighten sanctions on Hezbollah. But many in Lebanon, including Hezbollah’s opponents, fear that the next round of sanctions could do serious damage to the Lebanese economy by making international banks nervous to do business with Lebanese banks. Lebanon’s economy is already crumpling under the collapse of the tourism sector and the weight of over a million Syrian refugees. As Congress tightens the screws, it must be careful to avoid further destabilizing a country that is holding on by a thread. The United States should work closely to ensure Lebanese banks are effectively implementing existing sanctions, both by monitoring and with support for compliance efforts.

Second, the Trump administration should not cut off support for the Lebanese Armed Forces. Important work has been done by both the Bush and Obama administrations to build the LAF into a credible and legitimate entity, and it is now one of the most trusted public institutions in Lebanon. The most impressive return on U.S. investment to date has been the Lebanese Special Operations Forces (LSOF). These regiments are considered by the U.S. military to be among the best in the region and to play a critical role in mitigating the threat posed by the Islamic State and other Salafi jihadists inside Lebanon.

But Trump’s 2018 budget blueprint would cut military and security assistance to Lebanon by 80 percent from fiscal year 2016 levels. Such a cut would be particularly damaging in light of the Saudi decision last year to cease its $4 billion security assistance program to Lebanon. Critics argue that the LAF is working with Hezbollah, but U.S. military officials directly involved refute this claim. American officers told both of us that there is some penetration as well as coordination with Hezbollah, but they say this does not compromise the LAF’s independence. Indeed, these American military leaders fear that if the United States cuts off assistance to the LAF now, we have effectively handed Lebanon to Iran on a platter.

Third, the United States should continue its assistance for the Syrian refugee population in Lebanon. Trump’s 2018 budget slashes refugee-assistance programs across the globe. Such cuts could have a disastrous impact on the stability of a country where underserved Syrian refugees make up one-fourth of the population. Lebanon’s top security officials are deeply concerned that this population will radicalize over time, much as the Palestinians did a generation before. Cuts in existing assistance will only accelerate this process.

Finally, Lebanese experts note that Shia populations in the south of the country are growing disaffected with Hezbollah over the war in Syria. That effort has diverted badly needed resources from poorer communities, while sacrificing their sons in a foreign war. The U.S. administration should help the Lebanese government fill the gap in basic services in these communities, perhaps helping to drive a wedge between Hezbollah and its traditional support base.

Hezbollah is Iran’s most powerful proxy force. Containing its influence is critical to any more assertive stance against Iran. But that requires a comprehensive approach that integrates effective sanctions and continued support for the Lebanese military with assistance to shore up Lebanon’s stability. Sustained engagement—not bellicose language and ill-conceived budget cuts—will be the key to success.

Hardin Lang is a Senior Fellow at the Center for American Progress (CAP). Vikram J. Singh is the Vice President for National Security and International Policy at CAP.