This is Trump's Opportunity to Uncover the Iran-North Korea Connection 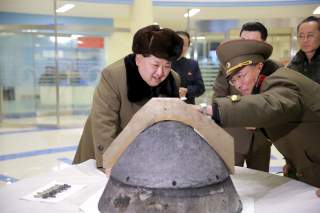 Does the road to Tehran lead through Singapore? Hopes are high that next week’s summit between President Trump and North Korean leader Kim Jong-un will begin a process leading to the total, verifiable and irreversible denuclearization of the Korean Peninsula. But North Korea can also play a major role in the broader global effort against nuclear proliferation.

When it comes to illicit nuclear weapons programs, North Korea is the undisputed master. Despite their best efforts, the administrations of Bill Clinton, George W. Bush and Barack Obama failed to prevent Pyongyang from acquiring nuclear weapons and ballistic missiles. The Kim dynasty manipulated negotiations, evaded sanctions, bluffed, begged, borrowed and stole its way into the nuclear club. And it did so despite having one of the weakest, most backward economies in the world.

So now we want to know how the regime did it, and most importantly, who else helped the regime to achieve that goal. National Security Advisor John Bolton was criticized for talking about a “Libya option” for North Korean denuclearization. His critics wrongly focused on Muammar el-Qaddafi’s grisly fate after his NATO-assisted overthrow and killing in 2011. But Qaddafi’s death was the product of a misguided Obama administration policy that wound up destabilizing Libya and turning it into a terrorist playground. Betraying Qaddafi was a serious net loss for the United States in the region, and Hillary Clinton’s strangely flippant comment, “We came, we saw, he died,” only worsened the situation. That was obviously not what Bolton meant.

The relevant Libyan option dates to 2003, when Bolton served as the undersecretary of state for verification and arms control. In December of that year, Qaddafi agreed to abandon his illicit nuclear weapons program and handed over tons of hardware and documents detailing every aspect of his undertakings. Revelations from this intelligence trove helped expose the nuclear proliferation ring run by Pakistani nuclear scientist Abdul Qadeer Khan, which had boosted weapons programs in Libya, North Korea and Iran. Breaking up the Khan network was even more important than ending Qaddafi’s rudimentary nuclear program.

Yet the loss of support from Khan’s network did not prevent North Korea from eventually developing and testing nuclear weapons, even while suffering under harsh international sanctions. Thus, any denuclearization deal with Pyongyang must include giving U.S. analysts access to North Korea’s nuclear records, including information on how the Hermit Kingdom evaded sanctions, who it worked with to obtain nuclear components, and the extent to which it was collaborating with other countries or corrupt officials.

It is hardly surprising that Syria’s President Bashar al-Assad has rushed to schedule his own summit with Kim, since Syria was a part of the North Korean proliferation network. In September 2007, Israeli warplanes destroyed the al-Kibar plutonium reactor in the sparsely populated eastern Syrian governate of Deir ez-Zor in what they called “Operation Outside the Box.” The reactor had been designed and built by North Korean technicians, and ten of them were killed in the attack. Assad may be heading to Pyongyang looking for assurances from Kim that the details of the nuclear relationship between the two countries will be kept under wraps. The United States should insist otherwise.

Back then, an Iranian defector revealed that construction of the al-Kibar reactor was underwritten by Tehran. This points to a second, potentially much more revealing intelligence bonanza: exposing North Korea’s cooperation with Iran on nuclear and ballistic missile programs. North Korea has been Iran’s main supplier of missile technology, and may have been giving the Islamic Republic fissionable material as well. A leaked UN report from 2011 stated that the two countries were exchanging smuggled illegal missile parts. Iran’s top nuclear scientist, Mohsen Fakhrizadeh-Mahabadi, was reportedly present at North Korea’s third nuclear test in 2013 while working on a project to develop a warhead that could fit on North Korea’s missiles. An unnamed U.S. official speculated at the time that “it’s very possible that the North Koreans are testing for two countries.” Maybe now we can learn the answer to that question.

The exact nature and extent of the illicit relationship between North Korea and Iran is not publicly known, but this could easily be rectified with Pyongyang’s help. The important questions include: To what extent were the countries cooperating on their nuclear programs? Did Iran engage North Korea to conduct aspects of their program abroad to evade international inspection? What technology was transferred, and by whom? What other countries helped facilitate this criminal relationship? And, overall, what information does Pyongyang have on Tehran that the Iranians thought the world would never see?

Image: North Korean leader Kim Jong Un looks at a rocket warhead tip after a simulated test of atmospheric re-entry of a ballistic missile, at an unidentified location in this undated file photo released by North Korea's Korean Central News Agency (KCNA) in Pyongyang on March 15, 2016. REUTERS/KCNA/Files ATTENTION EDITORS - THIS PICTURE WAS PROVIDED BY A THIRD PARTY. REUTERS IS UNABLE TO INDEPENDENTLY VERIFY THE AUTHENTICITY, CONTENT, LOCATION OR DATE OF THIS IMAGE. FOR EDITORIAL USE ONLY. NOT FOR SALE FOR MARKETING OR ADVERTISING CAMPAIGNS. NO THIRD PARTY SALES. SOUTH KOREA OUT. NO COMMERCIAL OR EDITORIAL SALES IN SOUTH KOREA THIS PICTURE IS DISTRIBUTED EXACTLY AS RECEIVED BY REUTERS, AS A SERVICE TO CLIENTS. TPX IMAGES OF THE DAY TPX IMAGES OF THE DAY​