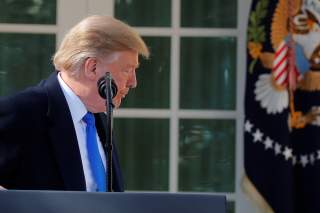 There is a fantasy. According to this fantasy, armies of drug dealers, criminals, and rapists are at or are approaching our Southern border. They are crossing in massive numbers in many dozens of unprotected places along the 2000-mile border and are wreaking havoc in border towns and cities across America.

Of course, none of this is true. But that doesn’t matter. All that matters is that the current President of the United States believes it or at least wants his followers to think that he believes it. Either way, he has announced his intention to upend the Constitutional balance between the Article I legislative branch, solely authorized to raise revenue and allocate its expenditure, and the Article II executive branch authorized to administer the expenditures as directed by Congress under its continuing oversight.

It seems not to matter to the executive and his supporters that there are many more important and pressing issues facing the country at home and abroad and that none of them has caused a lengthy shut down of our government, let alone a Constitutional crisis.

It also seems not to matter that immigrants seek refuge through established border checkpoints, nor that their numbers have been steadily decreasing for a number of years. The same is true of drugs, almost all of which seek entry through those same checkpoints and are quite often intercepted.

More importantly, the vast majority of those seeking entry are not criminals but are refugees fleeing from South American criminal gangs and repressive governments. If there is a crisis, it is humanitarian in nature, and we are refusing to respond in a humanitarian way.

A president who seems desperate to pour concrete thirty feet high along the 1300 miles of the border has yet to introduce a national infrastructure program to pour concrete for new bridges, dams, and highways that are steadily deteriorating.

There are fake crises and there are real crises.

Those who insist on believing fantasies are described in literature as a Captain Ahab and in psychiatry as obsessive. Either one describing a chief executive is cause for deep concern.

Overwhelmingly the American people are not demanding a border wall. What started as a campaign rally performance rage line has, at the hands of a single news organization’s megaphone, become a national, life or death DNA test of “leadership,” loyalty, and a strange kind of nativist conservatism.

At the least, the bizarre episode of the border wall will become, in hindsight, a blueprint for future crypto-authoritarians as to how to whip up a pseudo-frenzy based on no evidence and the continuing need for distraction from real national problems, and investigations.

As it makes its way through the judicial system, this drama is far from over. There is always the possibility that Nancy Pelosi is surreptitiously encouraging the crazed criminal elements assaulting our Southern border, or that Robert Mueller is a secret agent of the Government of Mexico, or that Jeff Bezos is covertly financing miles of tunnels under existing barriers.

This strange episode in American history is irony on stilts. The symbol of the Cold War was a wall dividing Berlin. In the world of the twenty-first century, will the symbol of the Trump era be a wall trying, unsuccessfully, to divide America from the rest of the world?

Gary Hart is chair emeritus of the American Security Project, co-chair of the U.S. Commission on National Security for the 21st Century and a former member of the Senate Armed Services Committee.