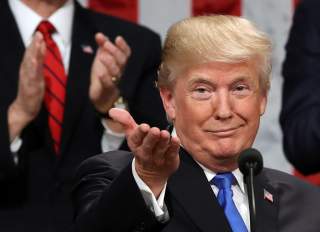 On February 2, the Trump administration published its review of U.S. nuclear forces and policy. The congressionally mandated Nuclear Posture Review (NPR) builds upon prudent elements of the Obama administration’s plans to modernize America’s nuclear weapons. But it departs from the optimism expressed in the 2010 NPR. That change reflects the current bipartisan recognition that the world has grown far more dangerous since 2010.

The 2018 NPR supports a robust modernization program for nuclear delivery systems: bombers, strategic submarines, and intercontinental-range ballistic missiles. These systems, deployed in the 1980s or earlier, provide a mix of attributes like survivability, flexibility, and responsiveness that strengthen deterrence and complicate adversaries’ efforts to attack the U.S. homeland and allies.

But the United States may not enjoy air superiority in all future conflicts. Consequently, the NPR endorses continued development of the Long-Range Stand Off weapon. This weapon will be able to reach targets that would otherwise have to be hit by only our oldest bombers exposed to high risk en route to their targets.

The review provides for extended deterrence by upholding U.S. tactical nuclear weapons deployment to Europe. Although the NPR calls these weapons “non-strategic,” their use in combat would have profound strategic implications. The United States is in the process of extending the life of the B-61 gravity bomb that fulfills this mission and designing the F-35 to be able to carry them.

The new NPR continues the Obama era policy of recapitalizing the nuclear triad. It also calls for investing more in maintaining and securing existing nuclear warheads. U.S. nuclear weapons are old. They have long outlived their original service lives and have not been tested in yield-producing experiments in a quarter century. Ensuring that our nuclear warheads are safe, secure and reliable is an enormous technological challenge. And it is essential because we will need nuclear weapons deterrence in years and decades ahead.

The NPR argues that the United States faces a great-power competition. That was not the prevailing assumption in the early 1990s, or even as late as 2010. However, it has become impossible to ignore Russia’s aggressive behavior, China’s increasing nuclear weapons capabilities, and North Korea’s advancing ballistic missile and nuclear weapon programs.

The 2018 NPR vows to close gaps in our U.S. nuclear weapon capabilities that our adversaries may be tempted to exploit:

The United States will maintain a spectrum of capabilities sized and postured to meet U.S. needs, and particularly to ensure that no adversary under any circumstances can perceive an advantage through limited nuclear escalation or other strategic attack.

Consequently, it calls for beefing up our arsenal of tactical nuclear weapons—an area where our inventory is massively outnumbered by Russia’s. For the near term, it proposes deployment of a small-yield nuclear warhead on submarine-launched ballistic missiles. In the longer term, it envisions a nuclear-armed, sea-launched cruise missile.

These systems do not require new nuclear warheads. The United States used to have similar systems in its arsenal. Reviving these capabilities allows us to respond to today’s threat environment without increasing the risk of nuclear attack. After all, the United States had a diverse set of low-yield nuclear weapons and a much larger stockpile during the Cold War, and that did not make the use of nuclear weapons more likely.

Complementing this initiative is the NPR’s effort to check Russia’s repeated violations of the Intermediate-Range Nuclear Forces Treaty. Moscow has tested and reportedly deployed ground-launched missiles with a range prohibited by the treaty.

The NPR responds to this by starting research work on a low-yield, sea-launched cruise missile—a step that neither violates the treaty nor requires basing agreements that might be politically contentious. The administration also recommends starting research on a conventional, intermediate-range, ground-launched cruise missile. This, too, can give U.S. negotiators additional leverage to pressure Russia into complying with its arms control obligations. Additionally, these capabilities might take on an important role in extending deterrence in the Asia-Pacific region.

Much has changed since the end of the Cold War. The United States must therefore adapt its nuclear weapon posture to maintain deterrence, assurance and credibility in the face of emerging threats. The 2018 NPR advances the concept of tailored deterrence strategies:

At the heart of deterrence is the ability to credibly threaten what your adversaries value. Our adversaries have hardened their most highly prized targets (often by deeply burying them), making it difficult—if not impossible—to destroy them with conventional weapons. At the same time, they are developing ever more-advanced counter-offensive weapons to make it difficult to reach these targets. U.S. defense policy and nuclear strategy must accommodate these two realities.

The 2018 NPR responds to these challenges by highlighting the need to modernize the nuclear triad and our tactical nuclear weapons and to develop additional capabilities to ensure that “potential adversaries perceive no possible advantage in limited nuclear escalation, making nuclear employment less likely.” This applies most strongly to regional deterrence dynamics.

The NPR is thoughtful and deliberate in its approach to arms control. The 2010 NPR indulged itself in assuming a more benign environment in which U.S. leadership on arms control—particularly nuclear weapons reductions—would incentivize others to reduce their nuclear arsenals. In reality, violations of international arms control agreements—left largely unacknowledged or unaddressed by Washington—proceeded apace. Other countries expanded their nuclear arsenals, increased salience of nuclear weapons in their national-security doctrines, and failed to increase transparency into their nuclear stockpiles.

The 2018 NPR states: “The United States is committed to arms control efforts that advance U.S., allied, and partner security; are verifiable and enforceable; and include partners that comply responsibly with their obligations.” But the review also acknowledges that we can’t afford to base national-security assumptions on hope, nor can we turn a blind eye to others’ nuclear programs and policies.

The document expresses strong support for the Treaty on the Non-Proliferation of Nuclear Weapons and states that the United States will continue to support the Atomic Energy Agency tasked with monitoring whether countries are complying with their nonproliferation treaty obligations. It also expresses support for the Comprehensive Nuclear Test Ban Treaty (CTBT) Organization Preparatory Committee as well as the related International Monitoring System and the International Data Center. It also upholds the U.S. moratorium on nuclear weapons testing.

However, it also announces that the administration will not seek ratification of the CTBT. That is a step in the right direction since the Senate rejected the treaty after a full floor debate in 1999. The treaty has not changed since and conditions for its entry into force in the United States have worsened.

U.S. nuclear weapons are one of the most important tools for assuring allies and dissuading them from developing their own nukes. The new NPR rightfully places assuring our allies and partners as the second most critical purpose of U.S. nuclear weapons (deterrence of a large-scale attack against the United States or allies being job one).

In strong terms, it articulates a policy by which the United States would consider nuclear retaliation in response to extreme circumstances, which could include “significant non-nuclear strategic attacks” on the United States and allies. This does not mean that nuclear weapons will be option one, nor that the threshold for nuclear weapon use is now lower.

In a sign of continuity with established U.S. nuclear weapon policies, the NPR articulates the U.S. commitment to negative security assurances. The United States will not use or threaten to use nuclear weapons against nonnuclear weapons states that are party to—and in compliance with—the nonproliferation treaty.

The 2018 NPR declares the Trump administration’s nuclear weapons policy, but it is just a start. The most important part of any strategy is its implementation.

Congress is a coequal partner to the executive branch. It can shape policies through the National Defense Authorization Act or other legislative acts. Most importantly, it provides funding for the nuclear forces—operations and maintenance costs, as well as the cost of implementing all other recommendations of the NPR. Congress also plays an important educational role. It should serve as a venue where nuances of nuclear-weapon policy can be discussed openly and transparently manner.

The 2018 NPR is a prudent realistic document that deserves congressional support.

Michaela Dodge is a senior policy analyst specializing in missile defense and arms control in The Heritage Foundation’s Center for National Defense.