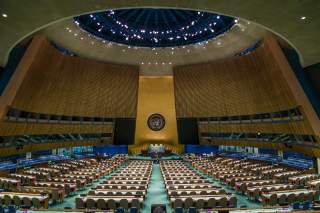 Last week, the New York Times reported that the Trump administration was considering two executive orders to “drastically reduce the United States’ role in the United Nations and other international organizations.” A draft titled “Auditing and Reducing U.S. Funding of International Organizations” was widely circulated among reporters.

The Left’s reaction was, predictably, outrage. As they told it, the executive order and the president “pose an existential threat to the United Nations.”

Such reactions seem overwrought. Certainly they are premature. The posted document was, after all, clearly a draft that contained tracked changes. The final version may be quite different. Indeed, Reuters quoted a senior U.S. administration official, who said that the administration would not issue a review of U.S. funding to the United Nations and other international bodies “at this time.”

Might President Trump issue such an executive order in the future? I hope so—especially if it retains the main features of the posted draft.

The purpose of the accompanying executive order is to ensure better alignment between United States national interests and U.S. monetary support to the United Nations and other international organizations.

To that end, it would set up an “International Funding Accountability Committee” comprised of the secretary of state, the attorney general, the director of national intelligence and the counsel to the president, or their designees. The committee would:

•  Report all U.S. funding going to international organizations and maintain an online database. This report would also explain the U.S. national interests served by the funding.

•  Identify international organizations receiving a disproportionately high level of U.S. financial support and recommend how to address that concern.

•  Recommend ways to ensure U.S. funds are used as intended and criteria for determining which organizations merit continued funding.

•  Suggest how to reduce U.S. voluntary funding to international organizations by at least a 40 percent.

•  Explain how U.S. policies are advanced by paying employees of international organizations more than comparable civil servants in the United States, singling out Israel for sanctions, providing development assistance to countries that oppose U.S. policies, and more.

Basically, then, the draft document calls for a high-level committee to compile data and make recommendations about the purposes and efficacy of spending taxpayer money on international organizations. Pretty tame stuff to get outraged about.

In fact, there is a lot to like in this draft.

•  It reinforces congressional demands for more transparency and makes explicit the administration’s intent to comply with U.S. law. Taxpayers have seldom been told how much the U.S. government spends on international organizations. The State Department’s annual report to Congress has been far from comprehensive. Indeed, the Obama administration refused to provide that information for years—until Congress passed a law specifically requiring the information.

The resulting reports—covering fiscal years 2015 and 2016—reveal that U.S. contributions have risen over 36 percent since fiscal year 2010. And even these reports aren’t comprehensive. They note that “not all Executive Branch agencies provided information for inclusion in the report.” Notably absent, for example, is last year’s $500 million payment to the Green Climate Fund.

In addition to reinforcing current reporting requirements, the prospective executive order corrects an oversight by requiring information on contributions to all international organizations, not just those in which the United States participates as a member.

The order also would reinforce current law, which prohibits U.S. funding for international organizations that violate U.S. statutes and sanctions or grant membership to the Palestinians.

•  It sends the message that the administration intends to be a responsible steward of taxpayer dollars. Every administration should assess whether our contributions to international organizations are serving U.S. interests. When the Clinton administration conducted such an assessment in the 1990s, it led it to U.S. withdrawal from the UN Industrial Development Organization. Unfortunately, it’s been years since the United States conducted a comprehensive analysis of this type.

The UK Department for International Development recently conducted its own assessment and decided to end funding for several UN organizations, including UNESCO. That action spurred UN organizations to improve their management and effectiveness—a development that should gratify both donors and recipients.

The State Department reports that the United States contributed $10.5 billion to dozens of international organizations in fiscal year 2016. Though a small portion of the overall federal budget, it’s a huge amount of money. U.S. officials owe it to the American people to justify that expenditure; making the evaluation transparent is desirable from a good governance standpoint.

The disparity is even greater for the UN system as a whole—i.e., the regular and peacekeeping budgets plus contributions to UN funds and programs like UNICEF, and UN-specialized agencies, like the World Health Organization. The United Nations System Chief Executives Board for Coordination reports that, for 2014 (most recent year reported), the United States provided more than a fifth ($10.1 billion) of all UN revenues ($48.1 billion). Japan, the second most prolific spender, provided less than 6 percent of UN revenues.

This is the very definition of disproportionate. Not every country need pay the same amount, but it is hardly outrageous for the United States to seek a more equitable allocation of costs. Moreover, more equitable cost sharing would be in the long-term interests of UN organizations. It is unhealthy for them to be too dependent on U.S. contributions. Just witness the alarm that potential cuts in U.S. contributions are causing. A broader base of support helps insulate these organizations from short-term funding disruption.

It sets up a quite deliberative process. The draft order sets a report deadline of January 1, 2018. That would give the committee a year to incorporate information and vetting from agencies with a stake in the recommendations, such as the State Department, the intelligence community, the Justice Department, the White House and other parts of the U.S. government—like the U.S. Permanent Representative to the UN. Moreover, looking at that deadline, the earliest that the funding recommendations on funding could be worked into the budget process would be for the president’s fiscal year 2019 budget proposal. It is also important to remember that the report will contain mere recommendations, and Congress will have a say in funding decisions.

Unfortunately, the Left chose to ignore or downplay these legitimate issues. Instead, it focused on the instruction to the committee that it recommend at least a 40 percent reduction in U.S. voluntary funding to international organizations.

Doubtless it would be hard to achieve such substantive reductions in voluntary funding without affecting U.S. interests and foreign-policy objectives. However, it is also hard to conceive that every last dollar of voluntary U.S. spending on international organizations is vital and necessary.

Overall, the draft executive order is sensible. However, if the Trump administration proceeds with this initiative, a few small tweaks are in order. For example, it should remove the arbitrary 40 percent target and simply ask for recommendations for reducing U.S. voluntary contributions. This would let the process arrive at its own conclusions and lead to a product that can serve as a starting point for working with Congress to ensure that taxpayer dollars provided to international organizations support U.S. interests.