Trump's Plan for Selling Weapons to the Middle East 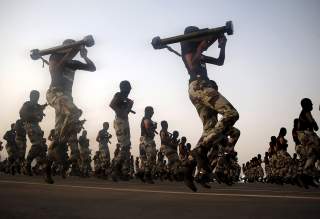 The Trump administration has set its sights on expanding America’s substantial arms sales around the globe. The United States is already the world’s leading arms exporter, accounting for 34 percent of total arms exports in the world between 2013–2017 according to a recent release by the authoritative Stockholm International Peace Research Institute (SIPRI). Arms sales constituted 6.2 percent of the value of all U.S. exports in the period from 2007 to 2014. During the Obama presidency, the administration approved more than $278 billion in foreign-arms sales, more than any administration since World War II. In the first year of President Trump’s administration, the United States signed arms-export deals in excess of $41 billion and notified Congress of potential deals that total more than $82 billion, though some of these were initiated under the previous administration.

In the effort to increase sales, President Trump is actively urging foreign leaders he meets to buy U.S.-made military systems and equipment. He also signed on April 19 a National Security Presidential Memorandum approving a new Conventional Arms Transfer (CAT) policy designed to ease export restrictions. The recent announcement by the Defense Security Cooperation Agency of the reduction of the surcharge foreign nations pay when buying American weapon systems from 3.5 to 3.2 percent, is another step designed to increase the competitiveness of “buying American” by this administration. Bolstering arms sales is seen by the administration not only as a tool to enhance traditional national security and foreign-policy goals but as serving its “America First” policy by supporting the manufacturing and defense industrial base and driving new innovation and creating American jobs.

Arms exports to the Middle East comprise a substantial part of America’s global sales, accounting for 49 percent of total US arms exports between 2013 and 2017. The overall value of U.S. major arms sales to the Middle East is difficult to determine exactly but a moderate estimate would put it at over $150 billion since 2007. This includes hundreds of advanced fighter jets, attack and utility helicopters; advanced munitions; Multi-Mission Surface Combatant (MMSC) Ships; as well as Patriot and THAAD air defense systems. Many of these arms sales frequently generate follow-on, multiyear paid training, technical and logistical support as well as the building of relevant infrastructure.

Retaining this level of arms exports in the coming years to the Middle East will be a very tall order for the Trump administration. Capacity limits combined with a deliberate policy of arms purchase diversification by the Arab states means that the chances of retaining previous levels of arms sales to the region in the years to come are slim. The projected fall in the value of arms sales to the Middle East will make it very difficult for the present administration to surpass the level of foreign-arms sales of the Obama administration. This unless more sales to the Asian market materialize or new technologies such as fifth-generation fighters are released to the Arab countries.

The sale of advanced fighter jets comprises a substantial part of the surge in arms sales to the Middle East. Since 2008 the United States has sold over two hundred 4 and 4.5 generation fighter jets to Arab countries, most of which are still in the process of being delivered. These deals have also included the upgrading of 182 existing US-made fighter jets (see Table 1). Additionally, some of these countries have also purchased further fighter jets from European and Russian manufactures (see Table 2). In total, the Arab countries have either purchased or upgraded over 650 fighter planes over the last decade.

While the most significant sales to the Middle East under the Obama administration were fighter jets and helicopters, air defense systems (THAAD and Patriot) and munitions top the list so far during the Trump presidency. Furthermore, European countries continue to make significant military sales to the Arab countries including not only fighters but helicopters (Italy) and warships (France, Italy and Spain) too.

Subsequently, the untapped demand for additional pricey U.S.-made fighters and warships in the coming years would appear to be limited. In addition, following the purchases of expensive THAAD and Patriot air-defense systems by Saudi Arabia, the UAE, Kuwait, and Qatar in the last few years, these lucrative platforms may also be mainly replete for now.

While the United States remains the main guarantor of Sunni Arab security, with the presence of naval, land and air forces in Bahrain, Kuwait, Qatar, the UAE, Oman, and Iraq, these countries have adopted a deliberate policy of diversifying their arms imports choosing to spend tens of billions of dollars on European or Russian weapon systems rather than on U.S.-made arms. Even Egypt, the recipient of a generous annual $1.3 billion in U.S. military aid, has tapped from its reserves and loaned from Gulf states and from suppliers in order to purchase at least $13 billions worth of weapon systems since 2013 from France, Germany, and Russia rather than from the United States.

At its core, this policy of diversification is designed to increase Arab leverage on the United States, to retain freedom of action and to hedge against possible U.S. regional retrenchment. Therefore, easing U.S. defense export regulations or reducing surcharge rates will not necessarily make much difference to the choices that these countries will make regarding the purchase of American versus non-American-made weapon systems.

Arms diversification reduces an over-dependency of the Arab countries on U.S.-supplied weapon systems that could be used to prevent their freedom of action. Being overly reliant on U.S. platforms, munitions, logistical and technical support could undermine the efficacy of military action at a time of increased Arab willingness to take their own initiative, sometimes in the face of American disapproval. The purchase of advanced European weapon systems demonstrates the futility of the United States trying to over-restrict military actions by the Arab countries in places like Yemen and Libya, whether by the administration or by Congress.

In addition, the competition that diversification creates between U.S. and European manufacturers for the Arab arms market continually pushes up the quality of the capabilities being offered. Arab purchasing power has helped them to undermine the level of U.S. restrictions on the types and the sophistication of the weapon systems released to them. Consequently, highly advanced U.S. weapon systems and munitions have been sold to countries like Saudi Arabia, the UAE, and Qatar, at a level that probably exceeds what would have been released if they were solely dependent on U.S. arms.

Buying substantial amounts of French, British, Russian and German-made weapon systems also serves to reinforce the security relationships between Egypt, the Gulf states, and these countries as a way to hedge against a possible weakening of America’s regional commitment. The Obama administration’s desire to pivot away from the region towards Asia reinforced the need for arms diversification by the Arab countries as a means to bolster their relations with other extra-regional powers who could possibly help guarantee their security. U.S. retrenchment from the Middle East is still not considered to be a far-fetched prospect.

Political goals obviously play an important role in the degree of arms diversification. Qatar has attempted to overcome its regional isolation by purchasing arms abroad to enhance multiple partnerships. It has recently negotiated deals with the United States for thirty-six F-15s ($6.2 billion) and precision-guided munitions ($300 million), with the UK for twenty-four Eurofighters ($6.7 billion), with Italy for helicopters ($3 billion) and for warships ($5 billion). In addition, it has negotiated deals with its regional partner Turkey ($700 million) as well as with Norway ($1.9 billion).

Increasing or even retaining the significant contribution of foreign-military sales to America’s economy will require continued substantial orders from the Middle East and Asia. Overall, Arab demand for expensive U.S.-made major weapon systems may, however, have peaked for the time being, following the extensive sales of the past decade. In the major categories of airplanes, helicopters, warships and air-defense systems the Arab clients are probably at or close to their capacity limits. With residue demands being shared among multiple arms exporters in line with the Arab policy of diversification.

The variance between the Trump administration’s desire to increase arms sales to the Middle East and the declining regional demand for what the United States presently markets, will require something more than expeditious export approvals or a reduced surcharge. The president will in all likelihood bring pressure to bear on Arab leaders to “buy American” as a price for continued U.S. security guarantees to the countries of the region. In addition, his administration looks set to create new opportunities for arms exports through the release of advanced capabilities hitherto denied to the Arab countries, including the F-35 fifth-generation fighter jet and armed drones.

The release of these capabilities is obviously problematic from the viewpoint of America’s commitment to Israel’s Qualitative Military Edge (QME). Declining arms exports in combination with the pressures from Saudi Arabia, the UAE as well as from Lockheed Martin, is tilting the balance in favor of selling the F-35 fighter to the Arab countries. This could indeed contribute considerably to keeping the Middle East as a major arms market in the years to come.