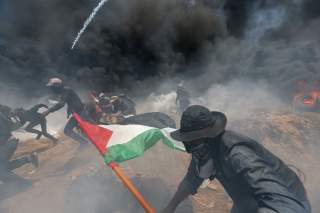 A few days after President Donald Trump’s son-in-law and senior adviser, Jared Kushner, unveiled the U.S. economic peace plan in Bahrain, Trump addressed the topic during a press conference at the end of the G20 summit in Japan. The president said that there would never be an Israeli-Palestinian peace agreement if one is not negotiated during his presidency. He also opined that there is a “very good chance” his proposal for solving the decades-long conflict could succeed.

The conference in Bahrain was almost uniformly ridiculed by Middle East experts. But with the passage of time the meeting may prove to have served a useful purpose. This is because the preparations for the conference provided two important lessons. And, at least one unrelated but important development in the aftermath of the meeting improves the odds, even if only slightly so, that if launched soon, Trump’s political plan may at least get a hearing.

The first lesson of Bahrain is that money alone cannot resolve the Palestinian-Israeli conflict no matter how lucrative the package offered. This point was made clear before, during, and after the conference—even by those most supportive of the effort, such as Bahrain’s Foreign Minister, Khalid bin Ahmad Al Khalifa. Again and again, Arab participants referred to two-state frameworks, notably the 2002 Arab Peace Initiative as prerequisites to the successful application of economic incentives. That reference was important in case Trump’s close circle still harbored hopes that the Palestinians could be bribed to accept a deal that ignores their national aspirations; this illusion has been finally put to rest in Bahrain.

The second lesson of Bahrain is that the Palestinians cannot be strong-armed to accept a process if they deem it as undermining their cause. Indeed, the run-up to the conference proved conclusively that absent a political plan that meets the Palestinians’ minimal requirements—an independent state based on the 1967 lines with territorial swaps and with its capital in East Jerusalem—even the combined efforts of Egypt’s President Abdel Fattah el-Sisi, Jordan’s King Abdullah  II bin Al-Hussein, and Saudi Arabia’s Crown Prince Mohammed bin Salman could not persuade the Palestinians to attend the conference, let alone accept the economic package offered there.

None of the aforementioned developments and considerations seem to have diminished Trump’s ambition to demonstrate that he can succeed where all his predecessors have failed; therefore, it would not be surprising if, in hindsight, the conference in Bahrain was a turning point for Trump and Kushner. Perhaps they will have learned that the only way to keep their peace efforts from ending in colossal failure is to launch a political plan to resolve the conflict. Also, Trump’s peace plan must be sufficiently fair to the Palestinians so that Arab leaders attempting to encourage their participation would not be seen as betraying their cause.

Trump must unveil this plan before the September 17 Israeli elections. Why? Because former Israeli prime minister Ehud Barak announced that he would be entering the race to unseat Prime Minister Benjamin Netanyahu. Barak is a strong proponent of a two-state framework, believing that in its absence a one-state reality will prevail, undermining the Zionist dream of establishing a Jewish and democratic state.

Barak’s efforts to form a united and energized center and left-of-center coalition to counter Netanyahu’s Likud-led rightwing coalition will fail absent a concrete political context. The publication of Trump’s political plan will give Barak an opportunity to transform the elections into a referendum on the plan as the only way to resuscitate the two-state solution and halt the continued slide to the nightmares of a one-state reality. This assumes, of course, that the Trump team to proposes a political plan that is not so one-sided as to invite an immediate Palestinian rejection and to deprive Arab leaders of any compelling talking points with which they might persuade the Palestinians to avoid such rejection.

Would Trump encourage such a referendum? The answer will be affected by two determinations that he will have to make: First, the president would have to prioritize his personal ambition to resolve the Palestinian-Israeli conflict over his personal affinity for Netanyahu. Second, Trump would have to be prepared to offer the Palestinians a deal that they would not reflexively reject even if such a deal is unlikely to be welcomed by the most important component of the president’s political base: the Evangelical Christian community, which has twenty-two to twenty-five million members. Will the president take such a risk so close to the next U.S. elections? Probably not. But then again, what were the odds that Donald Trump would become the first serving U.S. president to set foot on the territory of North Korea?