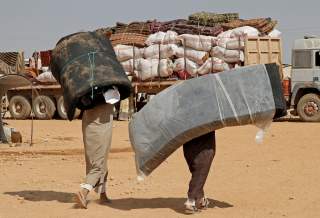 Congress is beginning to consider next year’s allocations, making this a good time to revisit Secretary of State Rex Tillerson’s earlier testimony before the Senate Appropriations Committee on the impact of the proposed FY18 budget cuts on refugees. In that hearing, he made several statements that were either unrealistic or inaccurate.

When Senator Richard Durbin asked about the effect of reducing by eighteen percent the budget of Migration and Refugee Assistance on a U.S. ally, Jordan, Tillerson averred that U.S. troops and diplomatic resources are restoring the conditions that allow refugees to return home. He cited that the successes in Iraq could be replicated in Syria, ignoring fundamental differences in the impetus to flee between Iraq and Syria.

The primary driver of displacement from Syria was not ISIS. It was the the Bashar al-Assad regime’s tactics, which included massive imprisonment and torture, barrel bombing civilians, chemical weapon attacks, the use of rape and attacks on medical workers and facilities as weapons of war. According to UN High Commission for Refugees (UNHCR), 529,000 registered refugees (with possibly tens of thousands more unregistered) had already fled Syria by the beginning of 2013. ISIS was not formed until April 2013, and did not take root in Syria until 2015. By then, nearly ten times the number of registered refugees had fled. This fact alone demonstrates that defeating ISIS will not solve the problem that caused refugees to flee, nor create conditions conducive to returning home.

The growth of ISIS was enabled by the Assad regime, which withheld bombing their base in Raqqa to demonstrate that there were greater threats than the Alawite government. As loathsome as their repressive and violent ideology is, ISIS and the (now rebranded) Jabhat Fateh al-Sham provided some measure of stability, security, income and services in areas that had been destroyed by war.

But Tillerson’s testimony failed to address other realities. Every refugee response agency agrees that the priority is returning refugees to their home country. But with Syria, there is, mostly, no home to which to return. Satellite images posted by the  United Nations Institute for Training and Research shows widespread damage. In Aleppo alone, at least thirty percent of homes are destroyed or uninhabitable.

Secretary Tillerson also described his strategy: “We are talking to other countries and asking them to do more, to step in to fill some of the needs that Jordan has in refugee camps. Same in Turkey.” This reasoning has three fallacies:

First, fewer than ten percent of registered Syrian refugees are in camps. Ninety percent, the majority of whom are women and children, are urban refugees. We don’t know how many hundreds of thousands or millions are unregistered and below the radar. Reaching them requires special outreach and services. As urban refugees, they are a huge strain on schools, hospitals, water supplies and other infrastructure in their host countries—especially those that share a border with Syria.

The second fallacy is that others are not stepping up to the plate. It is true that the U.S. is the single largest donor nation, having provided nearly $6.5 billion to the region since the start of the crisis. However, the EU has mobilized €9.4 billion, with an additional thirty-three percent of that amount pledged for 2017. By 2016, Kuwait had donated $360 million (proportional to their size) to UNHCR for the Syrian crisis and Iraq. In 2015, they were the largest donor, per capita, and the UNHCR’s sixth largest donor globally. That said, the UNHCR has a forty-two percent funding gap which must be filled by recalcitrant donor nations that have unpaid pledges as well as by increasing donations across the board.

Finally, Tillerson noted the need to assist refugee camps in Turkey. However, Turkey does not seem to be preparing Syrians to return home. Syrians speak Arabic, while schools in Turkey teach only in Turkish. As a result, some refugee parents are refusing to send their children to school, since Turkish is of no use if they return to Syria. This leaves a limited number of Syrian schools, largely staffed by volunteers, with a curriculum and language not recognized in Turkey. In addition, Turkey is not granting exit permits to highly educated Syrians as a means of stemming its brain drain and utilizing their skills in its economy (There’s a lesson here for the United States). Such policies don’t appear to be advancing Secretary Tillerson’s stated goal of returning refugees to their homes.

Given President Donald Trump’s reduction of the cap on refugee resettlement in the United States from 110,000 to 45,000, we should be allocating more funds, not less, to provide aid to refugees in place. Cutting the budget for refugee assistance is irrational.

Dr. Georgette Bennett is the Founder of the Multifaith Alliance for Syrian Refugees (MFA), a coalition of nearly ninety faith-based and secular organizations. MFA’s mission is to mobilize the interfaith response to the Syrian humanitarian crisis, raise funds to alleviate suffering, cultivate partnerships to advance future stability in the region, advocate for sensible and humane refugee policies, and create awareness of the facts, the needs, and the opportunities for positive action.