Trump's Shutdown Showdown Is a Threat to National Security 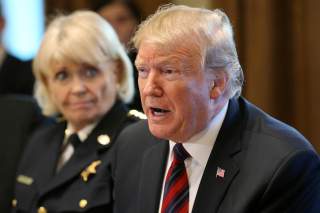 Last Saturday the federal government entered what has now become the longest shutdown in U.S. history. With Congress and the White House at an impasse, there is little hope a compromise will be found in the immediacy. Both Democrats and Republicans have thus far reached no middle ground, furthered by a certain provision—the border wall—which has been deemed non-negotiable on both sides of the aisle. While the shutdown undoubtedly affects a vast measure of essential government services, this lapse in funding also poses a noteworthy security vulnerability for the country. This is a twofold issue in the national-security community, which may be categorized by the more obvious short-term trepidations and the longer-term implications that may be overlooked given the vitriolic political dialogue overtaking headlines.

Of the 800,000 affected employees, only around 420,000 are guaranteed pay when the government reopens and are required to work without a salary during the shutdown. The remaining 380,000 are on a complete furlough with no guarantee of backpay when an eventual budget is passed [However, it is expected a bill will be passed to ensure back pay to all affected employees]. Many of the agencies impaired by the shutdown include those which are necessary for maintaining the nation’s federal law enforcement and security apparatus.

As the shutdown stalemate directly relates to border security, the Department of Homeland Security (DHS) has been impacted most heavily in terms of national security, accounting for 20 percent of the affected government operations and employees. Essential federal law enforcement agencies under the DHS umbrella, such as the Secret Service and Customs and Border Protection, are being expected to put their lives on the line and continue to work without pay. One more surprising organization affected by the government’s lapse in funding is the Coast Guard, a uniformed military service presently working without a paycheck.

It has been reported that high numbers of Transportation Security Administration (TSA) agents are calling out sick, termed “sickouts,” as a protest against having to work without pay. Inconvenience to travelers aside, the limited staff and declining morale at the TSA have an undoubtedly negative effect on aviation security. In a memo to employees last week, the TSA went so far as to threaten disciplinary action against employees who are partaking in sickouts. Recognizing the need for TSA agents to show up to work, agency officials also need to empathize with the financial burden now placed on their day-to-day staff. The Federal Aviation Administration is also affected which compounds aviation security setbacks and the Department of Justice is enduring similar concerns within the Federal Bureau of Investigation, and other federal law enforcement agencies and U.S. attorneys responsible for handling sensitive national security-oriented investigations—to name a few.

From a broader government perspective, a protracted shutdown also exposes federal agencies and even private sector companies indirectly involved in homeland security to a higher susceptibility of cyber incursion, insider threat, and general counterintelligence exploitation due to the lack of appropriate specialists on staff (e.g. the Department of Homeland Security’s Cybersecurity and Infrastructure Security Agency). Without the relevant internal security components, funding of contractors that fill such specialized security roles, or external support by government partners such as DHS, there are no doubt foreign adversaries seeking to capitalize on the U.S. government’s evident vulnerabilities during this shutdown scenario.

While the aforementioned concerns are more apparent in the short-term, lengthy government shutdowns also present future problems for the national-security community. Human capital is undoubtedly the lifeblood of any organization, but especially within national-security functions. It is absolutely essential for America’s defense and security components to be staffed with top-notch professionals, especially in the fields of science and technology. In a tight jobs market, where private sector careers are becoming ever more competitive, federal law enforcement and intelligence services are already struggling to ensure top talents are being recruited and retained. With over six million vacant jobs in the United States, many in Silicon Valley or on Wall Street offering very competitive salaries, it should come as no surprise if highly qualified government employees seek employment elsewhere. Not only would swaths of resignations hamper open investigations and ongoing operations but backfilling these billets with appropriately qualified staff would also present an enormous burden to the hiring components of these agencies. Young professionals with a penchant for government service are already being discouraged by backlogged security clearance investigations and sluggish hiring processes. The increased propensity for government shutdowns and furloughs will only deter candidates further.

Although funding for the border wall equates to a mere one-tenth of a percent of the federal budget, it is crucial to understand whether this debate represents a political standoff or one of true fiscal responsibility. Alternatively, a national emergency should only be called in times of grave national concern and not to evade the legislative process. Never before has a national emergency been called simply to bypass the budgetary authorities duly granted to Congress by the constitution.

Security should not be bartered. Border security is imperative, but so is ensuring that U.S. federal law enforcement, the intelligence community, and other security professionals are able to support their families and fulfill their mission. Security does not happen in a vacuum—it is a cumulative and collaborative effort. Now is a time for bipartisan compromise and to put U.S. democracy to work.

Matthew Flug spent nearly seven years in the U.S. intelligence community, focusing primarily on counterterrorism in Europe and the Middle East. Despite a transition to the private sector, Flug continues to follow and share insights on U.S. politics and foreign policy. He holds degrees from both American University and Johns Hopkins University.