Trump's Speech of Unity Had Plenty of Fighting Words 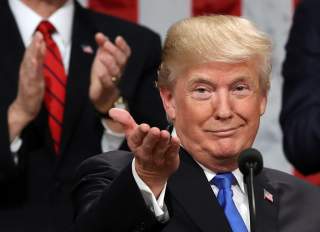 Donald Trump sounded many soothing notes in his State of the Union address. At the outset he pointed to the “American heroes” that make the country great. He declared, “I call upon all of us to set aside our differences, to seek out common ground, and to summon the unity we need to deliver for the people.” At the end of his speech, he said, “It is the people who are making America great again.”

But what was most notable about his speech was the tough talk that it contained. For all the talk of unity, Trump remains at his core a fighter who seeks out enemy combatants whenever and wherever he can find them. He said, “we proudly stand for the national anthem” and bragged that “we repealed the core of the disastrous Obamacare.” Far from conceding ground on issues like the Russia probe, immigration, or North Korea, Trump made it clear that, one way or another, he is headed for conflict.

When it came to North Korea, it was a sound decision on Trump’s part to single out the North Korean defector Ji Seong-ho in his State of the Union address last night. In 2006 Seong-ho had hobbled his way out of what Trump called a "depraved country" to find freedom abroad. “Seong-ho, I understand you still keep those crutches as a reminder of how far you have come,” Trump declared. Seong-ho stole the show by rising to his feet and waving his crutches in the air to tumultuous applause at the U.S. Capitol. It was a moving moment.

But if you call a country “depraved,” then there isn’t much room for negotiating with it. Trump referred to previous “complacency and concessions” by American administrations that had led to “aggression and provocation.” Such language suggests that Trump really doesn’t have much interest in trying to reach some kind of diplomatic accommodation with the Hermit Kingdom and Secretary of State Rex Tillerson’s face looked rather glum during Trump’s remarks.

Nor is this all. Earlier in the day, the administration made waves with the revelation that Victor Cha, who worked on the National Security Council during the George W. Bush administration and is a widely respected Korea expert, would not be named ambassador to South Korea. The decision was thanks to Cha’s reservations about a unilateral attack on the North and his support of free trade with the South. So after over a year, Trump has yet to appoint anyone to this key position—even as he contemplates some kind of military attack on Pyongyang.

By the evening Cha had published a lucid piece in the Washington Post debunking this nutty idea, which appears to be the brainchild of national security adviser H. R. McMaster (has he learned nothing from Iraq?). Cha rightly warned of the perils of a so-called bloody nose military strategy designed to humble the North. This approach could easily spiral out of control and result in a wider war in Southeast Asia. According to Cha:

An alternative coercive strategy involves enhanced and sustained U.S., regional and global pressure on Pyongyang to denuclearize. This is strategy is likely to deliver the same potential benefits as a limited strike, along with other advantages, without the self-destructive costs.

In other words, there is no such thing as a limited strike and the administration would be wiser to test the diplomatic waters. If Trump is really intent on war with North Korea, he may well create an even bigger disaster than Bush’s 2003 Iraq War.

Trump’s assertive tone extended to keeping Guantanamo open—a perpetual black eye to America’s reputation abroad—and ramping up spending on the American military. He called for further bolstering America’s nuclear forces, a move that will cost additional hundreds of billions. They must, he said, be “so strong and powerful” to “deter any acts of aggression by any other nation or anyone else.” Trump also called for a $1.5 trillion infrastructure bill. This at a moment when the United States is hurtling towards a $1 trillion annual deficit. Who’s going to finance it? What will be the impact on America’s credit worthiness? Will inflation increase dramatically as a sea of red ink engulfs the self-proclaimed capital of the free world? What will Trump do if the stock market crashes in the next year after tying himself to its fortunes closer than any previous president?

Trump also demanded that Congress vouchsafe him sweeping powers over the federal bureaucracy: “I call on Congress to empower every cabinet secretary with the authority to reward good workers—and to remove federal employees who undermine the public trust or fail the American people.” The implication of this statement can hardly have failed to register with Special Counsel Robert Mueller. It would essentially allow Trump or any other president to hire and fire anyone in the civil service at will.

And as he exited the House chamber, Rep. Jeff Duncan (R-SC) asked him to release a secret memo crafted by House intelligence chairman Devin Nunes (R-CA) that alleges the FBI misused its surveillance powers. “Oh, don’t worry, 100 percent,” Trump responded after Representative Duncan implored him to release the memo. As he heads into what promises to be a stormy and turbulent 2018, Trump knows that the only thing he can rely on is his base which will remain as loyal to him as he is to it. One way or another, he is going to war against his adversaries at home and abroad.