Trump's Strategy to Get NATO to Spend More Is Working—but Will It in the Long Run? 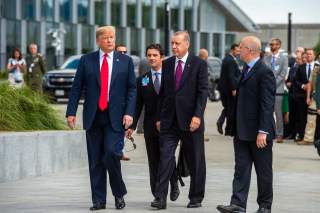 Many American presidents have tried to get the North Atlantic Treaty Organization (NATO) members to contribute more to their defense. For example, President Obama said that “every NATO member has to do its fair share.” President Eisenhower said that "[Europeans are] making a sucker out of Uncle Sam.” James Schlesinger, Nixon’s Secretary of Defense, even asked members to spend 5 percent of their GDP, compared to the 2 percent target now.

Trump has joined this chorus, repeatedly claiming that “NATO members that aren’t paying their bills” and are treating the Atlantic Alliance more as an extortion racket than the world’s preeminent interstate security agreement. But according to my research, where others have failed, Trump might be succeeding (although probably inadvertently). But this possible, short-term success is also undermining NATO’s medium and long-term cohesion.

What My Research Finds

All international treaties are made under “anarchy,” a condition where no external authority will enforce agreements or punish violations. States can only rely on their own resources for their defense, or that of allies who contribute to shared defense out of mutual national interests, institutional binding, or normative persuasion.

But alliances carry risks. Brett Ashley Leeds of Rice University finds that partners abrogate their commitments nearly a quarter of the time, while two researchers of Texas A&M University, Molly Berkemeier and Matthew Fuhrmann, recently found that states defect from defensive pacts over 40 percent of the time. If war comes, many countries suddenly “remember” better things they would prefer doing, letting an ally take the brunt of a military conflict.

Consequently, all states want to know they are their ally’s top priority under the terms of their alliance agreement. Will your partners show up when called, or will they place other goals ahead of your defense? Alliances can, therefore, be understood as formal promises of social rank. Allies state that, under certain conditions, they will prioritize a partner’s defense over other competing alignments or alliance partners. Those conditions can be broad, as found in NATO, or very tightly defined, such as in the alliances of the seventeenth and eighteenth centuries, as well as later in the late nineteenth century. But whatever the conditions, foundationally, an ally is saying that it prioritizes a partner’s defense above possible, alternative security coalitions.

I use this approach in a book project I am working on to assess why 75 percent of alliances share identical institutional features. One finding of my study is that manipulating rank is an effective source of coercive power over one's allies, particularly if you are more powerful. By credibly threatening to abandon partners in favor of other interests, or worse still, to realign against them, you can induce greater effort or concessions on their part.

In making this kind of threat, a state is not simply complaining about paying too much and badgering its partners to contribute more. Instead, it’s threatening to abandon the entire relationship, sacrificing all its interest and investment in that association to make smaller changes in burden sharing. Effectively, it’s losing the war (or threatening to lose the war) to win a battle.

In Europe, this is a very difficult policy to pull off. The United States and its NATO partners have multiple and extensive overlapping interests. Trans-Atlantic security is foremost among them, but they also possess deep trade ties, financial investments, and shared democratic norms and values. Transnational networks of legislators, military officials, and scholars further reinforce favorable policy towards NATO, and reputational considerations (e.g., the damage to American credibility were it to renege on this core alliance) reduce the chance of defection.

Unless the order of prioritization changes, European allies have fewer incentives to acquiesce to intra-allied coercion. Sure, they may get fewer weapons, or financial transfers, or other intra-allied goods. But so long as the ranking remains stable, allies know a partner will uphold the foundational-security guarantee. Indeed, what other option do they have? Unless America can credibly suggest it places Russian interests above European security, there are limits to how far Washington can coerce Berlin, London, and Paris and still maintain its core foreign policy interests.

But Trump's antics are credibly raising the prospect of abandonment/realignment, suggesting that he might be succeeding in shifting the NATO burden. He has done this through a persistent criticism of the Atlantic Alliance:

- During the 2016 campaign, he called the alliance “obsolete.” Although Trump reversed himself in April 2017, the fact that he took credit for a “new” focus on terrorism (something NATO has concentrated on since at least 1999) probably did not help in reassuring allies.

- He initially refused to support NATO’s signature Article V security guarantee (“an attack on one is an attack on all”), surprising both U.S. allies and members of his own Cabinet.

- He stated that “NATO is as bad as NAFTA.” Given that protectionism is perhaps Trump’s most consistently-held political belief, and that he called North American Free Trade Agreement “the single worst deal ever approved,” this statement is understandably alarming foreign policy experts.

- Most recently, the administration sent letters to NATO allies ahead of this month’s summit meeting to demand increased spending and reportedly warning that the United States was “losing patience.”

This steady drumbeat of complaints—coupled with a disastrous G7 meeting in June, reports that America may withdraw troops from Germany, and what looks to be a tense NATO summit next week—is credibly raising the possibility that Washington would abandon Europe. Worse still from this perspective, Trump’s bizarre proclivity for and defense of Russian President Putin raises the (small) possibility that the U.S. may even realign against its current allies. European leaders are worried that, during a one-on-one meeting on July 16, Putin may steer Trump in ways that further undermine the trans-Atlantic relationship.

In raising these possibilities, Trump is increasing American leverage over Europe and potentially leading them to increase their defense budgets, even independent of the rising Russian threat. The increase may not be as substantial as Trump wants, but his antics are still (theoretically) having an effect. Indeed, last year, U.S. allies announced they would boost defense spending by 4.3 percent, in total reaching 2.42 percent of GDP in 2017. NATO Secretary General Jens Stoltenberg also stated, “We have really shifted gears. The trend is up, and we intend to keep it up.”

The downside, of course, is that this behavior holds the entire relationship hostage to get a small increase in defense budgets that might already have happened due to rising Russian belligerence. There is a reason past presidents have not been successful in getting Europeans to share more of NATO's burden. This was because they prioritized Europe's security over alignment with Russia and did not want to undermine the primary vehicle for achieving that policy ranking. Indeed, if this theory about rank is correct, America may have been able to achieve greater burden-sharing without raising the specter of Russia. Realignment does not have to be towards a former enemy (although it probably is more effective), but simply that the United States prioritizes other regions and interests. The George W. Bush administration, for example, convinced NATO members to make the original 2 percent pledge, in part because it demonstrated it preferred to focus American foreign policy on the Middle East rather than “Old” Europe.

So Trump's antics may prompt Europeans to spend more on their defense, even if he executed this "policy" poorly and inefficiently. But, as researcher Jack Snyder predicted, there’s a broader downside to holding a relationship hostage: your partners start to look for other relationships. For instance, in May 2018, German Chancellor Angela Merkel stated that "It is no longer such that the United States simply protects us, but Europe must take its destiny in its own hands. That's the task of the future.” At the same event, French President Emmanuel Macron declared that, “If we accept that other major powers, including allies... put themselves in a situation to decide our diplomacy, security for us, and sometimes even make us run the worst risks, then we are not more sovereign and we cannot be more credible to public opinion.”

All of this assumes that Trump (and by extension, the United States) is acting strategically and rationally. But what if he isn’t? Trump does not have the best track record as a consistent negotiator. On NATO alone, he flip-flopped on both its obsolescence and Article V guarantee, before again flipping to a more hostile position on burden sharing. Moreover, he seized on transparent pretexts to justify his flips and took credit for spending and policy trends that predate him. At the least, Trump has demonstrated that, in negotiations, consistency matters little to him; he is willing to lie for an ephemeral advantage, and he views alliances as protection rackets. All this suggests that Trump does not have core beliefs on NATO’s strategic value, and he is willing to leverage the alliance to obtain “a better deal.”

Indeed, Trump’s antics make it harder for European leaders to comply with these demands. Among all but a handful of NATO members, public approval of U.S. international leadership has fallen throughout Trump’s term by at least ten points or more. Responding to the administration’s letter demanding greater spending, European leaders emphasized the independence of their alliance policy from Trump’s demands. The Belgian Prime Minister stated, “I am not too intimidated by this type of mail,” while the German Defense Minister remarked that “We don’t want to impress anyone.” At the least, Trump could facilitate such spending increases by acknowledging allied contributions to Iraq and Afghanistan, where 1,330 non-American NATO troops have died.