Trump's Threat to Declare a National Emergency to Build the Wall: What Does History Say? 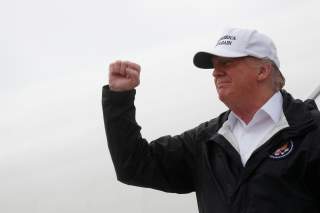 “I have an absolute right to declare a national emergency, the lawyers have so advised me. I’m not prepared to do that yet, but if I have to I will. I have no doubt about it, I will,” said President Trump to a gaggle of reporters on Thursday morning. But Trump’s possible move to build a border wall is arousing controversy not only on the left, but also the right. The Wall Street Journal editorial page warned on Friday that “appellate courts might establish new constraints on executive power that circumscribe a president’s response to future crises.” Members of the House Freedom Caucus are concerned that an emergency declaration might set a sweeping precedent for a future Democratic president to bypass Congress on issues of national importance.

How far-reaching would a move to invoke emergency powers be? What are the historical precursors for Trump’s possible action?

Presidents have used emergency powers multiple times in the past century to bypass explicit congressional law. In March 1933 during the nadir of the Great Depression, President Franklin Roosevelt declared a state of emergency to enact broad, sweeping economic reforms. “I shall ask the Congress for the one remaining instrument to meet the crisis--broad executive power to wage a war against the emergency, as great as the power that would be given me if we were in fact invaded by a foreign foe,” Roosevelt said during his inaugural address. Roosevelt declared a banking holiday, thereby ending the rush on banks. He went on to sign Executive Order 6102, which made it illegal for U.S. citizens to hold gold bullion and requiring everyone to forfeit such assets to the Federal Reserve. This executive order remained in effect until Congressional action was taken in 1974.

In 1950, President Harry Truman involved the United States in the Korean War, declaring it a national emergency. Korea was the first of the modern wars to be fought without a congressional declaration, with the president referring to it as a “police action.” By 1976, both national emergencies were still in existence, along with two others invoked under Richard Nixon in 1970 and 1971.

In September 1976, Congress passed the National Emergencies Act to restrain and guide presidential prerogative. The act required that presidents keep records of all significant orders made during a national emergency; that they track expenditures arising from these orders, instead of being never-ending they must be renewed annually; and most importantly, that any national emergency declared by a president could be ended by a concurrent resolution by Congress. A concurrent resolution is an action taken by Congress that bypasses the presidential veto, and only requires a simple majority of both chambers. The practice of the concurrent resolution was declared unconstitutional by the Supreme Court in 1983 under INS v. Chadha, removing the enforcement mechanism from the National Emergencies Act.

Between the act’s 1976 passage and now, fifty-eight national emergencies have been declared by presidents. Most of these are minor, a way to impose sanctions on foreigners and freeze overseas assets. Others were major extensions of presidential authority. George W. Bush declared separate states of emergency in response to the 9/11 terrorist attacks on September 14 and September 23, 2001. And that November, Bush invoked 10 U.S.C. 2808 under his emergency authority.

That part of the U.S. code, when invoked under a national emergency, “authorizes the Secretary of Defense, without regard to any other provision of law” to “undertake military construction projects…not otherwise authorized by law that are necessary to support such use of the armed forces.” This is the law Trump would cite to authorize construction of a border wall.

The situation is complicated, however, since immigration is handled by the Department of Homeland Security, not the Defense Department.

There’s no limit on his authority,” says former Reagan administration Justice Department official Bruce Fein. According to Fein, “If the concurrent resolutions are unconstitutional, then it’s quite clear that Congress would never have enacted these emergency powers if it didn’t believe it reserved the right through concurrent resolution to end them,” he says. “The Supreme Court has held that you cannot delegate legislative power without some kind of restrictive principles that guide its exercise. And if the president can do whatever he wants, there’s no restraint on the exercise of his power.”

While some Republicans like Senator Lindsey Graham are encouraging Trump to declare the emergency and move with full force, others are encouraging restraint. Senator Chuck Grassley called it “a bad precedent.” Presidential counselors Jared Kushner and Kellyanne Conway are apparently advising alternatives to the emergency declaration.

If Trump does go forward, it would almost certainly be challenged in the courts. “I don’t think there’s any case that has ever been decided, certainly not in the U.S. Supreme Court, that has endorsed the idea that the president on his own has emergency powers,” said Fein.

Beyond that, the situation changes from a legal challenge to a political one. House Speaker Nancy Pelosi has quieted down talk of impeachment among her colleagues recently, but if Trump were to impose his most iconic policy objective through legally weak procedure, the Democrats could take action.

Whatever actions Donald Trump adopts, and how the opposition party responds, could have permanent repercussions affecting not just this presidency, but American law and executive authority itself.