Trump’s Ukraine Lethal Aid Approval Is Not A Gamechanger 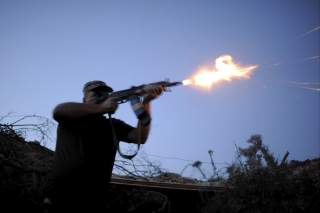 When the notifications started arriving, breathlessly announcing that the United States would be providing lethal assistance to Ukraine’s military, I assumed that a major shift in U.S. policy had taken place. As I began to parse the reporting more closely, it became clear that matters aren’t quite so clear.

It appears that, after months of the necessary paperwork sitting in the president’s inbox, Donald Trump signed off on a decision that will permit the State Department to issue the necessary export licenses to allow the sale of sniper rifles for use by the Ukrainian armed forces. This does represent a shift from the Obama administration’s policy of not allowing Ukraine to obtain U.S. firearms, and limiting the provision of U.S. military assistance to foodstuffs and technical equipment, but is not as earth-shattering as some reports and announcements on Twitter might make it.

For one thing, export licenses for much of the “heavier” equipment requested by Ukraine, starting with the Javelin antitank missile system, have still not been approved. More importantly, while the president has signed off on the licensing for the sniper systems, how Ukraine will pay for the weapons is still, so far, undetermined. In keeping with Trump’s passive-aggressive approach to Russia policy, he might have decided not to continue to expend political capital, especially with members of Congress, by “blocking” sales that both houses have approved—but may very well insist that Ukraine pay for any U.S. equipment. Trump may question why the U.S. taxpayer should foot the bill when Ukraine remains the world’s eleventh-largest arms exporter—and where Ukraine’s President Petro Poroshenko has initialed plans for Ukrainian defense firms to vault Ukraine into the “top five” of global arms providers.

So there are still gaps between approving export licenses—and actual crates of weapons arriving in Ukraine.

Is Trump attempting a satisficing decision—that is, approving export licenses for some lethal equipment to be sold to Ukraine, if the payments can be arranged—but declining to move on systems like the Javelins, in order to demonstrate that, unlike Barack Obama, he has provided some weaponry to Ukraine, but not the types that would potentially be major game changers and lead to Russian escalation? We have already seen this approach in the Jerusalem decision—moving ahead to recognize Jerusalem as Israel’s capital city, also in fulfillment of legislation passed by Congress—but delaying the actual move of any U.S. embassy facilities from Tel Aviv. Is Trump’s gamble that limited arms sales to Ukraine would establish his bona fides with a bipartisan national-security establishment that still remains suspicious of his Russia agenda, while not writing off completely his stated desire to try and pursue “deals” with Russia? Is it designed to give him more leeway with regards to imposing the next set of sanctions that Congress has mandated?

How will Moscow react? Will the Kremlin accept the political realities of limited U.S. arms sales to Ukraine but conclude that it does not change the fundamental balance of power on the ground? Will the Russian side attempt to use the provision of arms to try and split the Euro-American consensus on sanctions—especially now that the pillar of rectitude on keeping sanctions intact, Angela Merkel, has been politically weakened by the failure to form a new coalition in Germany? The Russians had, earlier this week, withdrawn from the Joint Center for Control and Coordination, which monitors the shaky ceasefire in Ukraine’s southeast, a move that some Ukrainians believes heralds an intensification of the conflict in the coming weeks—perhaps an effort to establish new facts on the ground?

Much depends, as well, on the Russian read of Trump’s decisionmaking style. The Syria strike may provide some clues for the Kremlin. Trump wanted to make a clear differentiation from the Obama style of decisionmaking, in agreeing to undertake a missile strike on the Syrian airbase, but also resisted any and all appeals for him to do more—to strike more targets, or to intensify efforts to remove Bashar al-Assad.

So will the Syria precedent hold for Ukraine as well? This may well be the key question—and the variable to watch in the coming days and weeks.

Image: A serviceman of the Ukrainian armed forces fires a weapon during a battle in Avdiivka, Donetsk region, Ukraine, August 23, 2015. Reuters/Maksim Levin