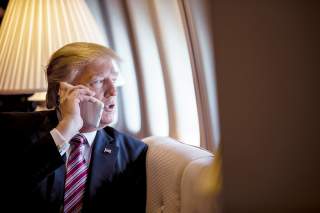 President Trump has proven as unpredictable on his East Asia policy as he has on a number of other policy issues during his first almost six months in office. In December, prior to his inauguration, Trump made an unprecedented decision to accept a congratulatory phone call from Taiwanese president Tsai Ing-wen—the first such call since the U.S. severed diplomatic relations with Taiwan in 1979 as a prerequisite for the establishment of Washington’s embassy in Beijing.

Then, after the April summit in Mar-a-Lago with China’s Xi Jinping, who seemed to be his best new buddy, President Trump made an about-face and told Reuters that he would want to speak with Xi first before any further telephone conversations with Tsai. “I really feel that he is doing everything in his power to help us with a big situation (North Korea),” Trump said. “So I wouldn’t want to be causing difficulty right now for him.” He added that he thought Xi was “doing an amazing job as a leader and I wouldn’t want to do anything that comes in the way of that. So I would certainly want to speak to him first.”

In response to Trump’s remarks, Taiwan’s presidential office was quoted by Newsweek as stating that it had no plans “at this stage” to hold a call, and that it understood the United States had priorities in handling regional affairs. President Tsai had previously told Reuters that Taiwan’s ties with the United States have been improving. “Taiwan may need to buy from its sole arms supplier the F-35 fighter jet, the most advanced stealth warplane in the U.S. arsenal. We have the opportunity to communicate more directly with the U.S. government,” Tsai said. “We don’t exclude the opportunity to call President Trump himself, but it depends on the needs of the situation and the U.S. government’s consideration of regional affairs.”

Concern over maintaining America’s steadfast commitment to Taiwan—as stipulated in the Taiwan Relations Act (TRA) and the “Six Assurances” of President Ronald Reagan—arose afterwards, especially when Trump told the Wall Street Journal in a January 13 interview that “everything is under negotiation, including (the) ‘one China’ (policy).” The fear was that Trump might consider making concessions to Beijing at Taiwan’s expense.

In the Trumpian era of “Art of the Deal” diplomacy, there was speculation that a more favorable trade deal for China with the United States could become an enticement for soliciting Beijing’s cooperation on North Korea, as some previous tweets have suggested. An even greater fear was that the security of Taiwan, as one of Beijing’s self-declared “core interests,” could be bartered for progress on the North Korean nuclear imbroglio. This was despite the fact that Secretary of State Rex Tillerson had publicly testified at his Senate confirmation hearing that “the people of Taiwan are friends of the United States and should not be treated as a bargaining chip. The U.S. commitment to Taiwan is both a legal commitment and a moral imperative.”

But, then again, not so fast. The new American president has a famously limited amount of patience. President Trump tweeted on June 20, the day after the death of Otto Warmbier, the U.S. student who was held captive in North Korea for over a year in a coma that Chinese help with North Korea “has not worked out.” (One could almost feel sorry for Xi Jinping as he was apparently given only two months after Mar-a-Lago to solve the intractable North Korean nuclear issue.) This was followed at the end of June by the announcement of a new $1.4 billion arms sales package for Taiwan and a U.S. Treasury Department announcement of sanctions on China’s Bank of Dandong for, according to CNN, serving “as a pipeline to support alleged illicit North Korean financial activity.” The policy zig back toward Taiwan definitely caused major displeasure in Beijing. The Chinese Embassy in Washington released a statement asserting that the sale of arms to Taiwan “grossly interferes” in China’s domestic affairs.

Taipei is not the only American friend in East Asia to be befuddled by the zigs and zags of U.S. policy in the Trump era. The new president of South Korea, Moon Jae-in, arrived in Washington just as President Trump was again talking tough on Pyongyang in the aftermath of Otto Warmbier’s tragic death, stating U.S. patience with the North Korean regime “is over.” However, when Moon Jae-in was elected in May as an advocate of a renewed “Sunshine Policy” of engagement with North Korea, he seemed to be in sync with the latest Trump administration diplomacy. On May 1, just nine days before Moon Jae-in’s election, President Trump told Bloomberg News that he would be willing to meet with North Korean leader Kim Jong-un “under the right circumstances” and that “I would be honored to do it.”

Moon Jae-in himself then said, after taking the oath of office, “If the conditions shape up, I will go to Pyongyang.” But Moon apparently spoke too soon, during a brief Trump zig toward Pyongyang before the zag again away following North Korea’s July 4 intercontinental ballistic missile test. President Trump then tweeted a decidedly different tune declaring that it was “hard to believe South Korea and Japan will put up with this much longer.” So it seems neither Donald Trump nor Moon Jae-in will be breaking bread in Pyongyang (or sharing a bowl of rice) with Kim Jong-un any time soon.

A final issue of allied concern in the East Asia region is freedom of navigation in the South China Sea following Beijing’s arms buildup in the area on man-made islands. This has continued unabated despite a stunning rebuff to Chinese territorial claims just a year ago by the Permanent Court of Arbitration (PCA), which left Beijing’s “nine-dash line” in tatters. That July 12, 2016, ruling was a decisive victory for Manila and previous Philippine president Benigno Aquino, whose administration brought the suit to the Hague in 2013.

New Philippine president Rodrigo Duterte, however, has indicated that the Hague ruling could “take a back seat” to reopened bilateral negotiations with China—which prefers, as the self-proclaimed “big country,” to pick off “small country” South China Sea territorial claimants one at a time. In conjunction with Duterte’s visit to Beijing last fall, where he received applause in the Great Hall of the People for calling for “separation” from the United States, the Philippines Defense Minister announced that plans with the United States “for joint patrols and naval exercises in the disputed South China Sea have been put on hold.”

The released transcript of an April 29 phone call between Presidents Trump and Duterte, as reported in the New York Times, records no mention at all of the South China Sea issue—Manila’s number one national-security threat as well as a major concern for its Washington treaty ally. Instead, the pair discussed Duterte’s controversial anti-drug campaign involving extrajudicial killings—Trump reportedly praised him for doing an “unbelievable job on the drug problem”—as well as the North Korean nuclear threat. The later point of discussion caused some confusion among area experts as America’s Philippine ally, unlike South Korea and Japan, lies hundreds of miles away from North Korea.

The South China Sea territorial question remains the key issue, however, for not only the Philippines but for other Association of Southeast Asian countries. U.S. freedom of navigation (FON) operations in these waters, which occurred with regularity under the Obama administration, did not take place during the first four months of the new Trump administration. This was possibly due to the administration’s attempts to curry favor with Beijing on the North Korean nuclear issue. Then, however, on May 24, according to a report by CNN, in an apparent policy zag back to more orthodox U.S. Navy operating procedure in the South China Sea, “the USS Dewey sailed within twelve miles of Mischief Reef, in the Spratly Island chain, on Wednesday in a ‘freedom of navigation operation.’” A complication is that Mischief Reef has been the subject of an ongoing territorial dispute between Beijing and America’s Philippine ally. Thus, if the Duterte administration decides not to press the issue with the Chinese, the United States could run the risk of appearing more Catholic than the Pope in pursuing freedom of navigation near Mischief Reef.

This first Trump administration FON was followed by another in early July when the USS Stethem sailed within twelve nautical miles of Triton Island. The Chinese Foreign Ministry issued a statement claiming that the U.S. vessel had “trespassed” in China’s territorial waters, further noting “its behavior has violated Chinese law and relevant international law, infringed upon China’s sovereignty, disrupted peace, security and order of the relevant waters and put in jeopardy the facilities and personnel on the Chinese islands; and thus constitutes a serious political and military provocation.”

Thus, all the zigging and zagging of Trump administration East Asia policy in its first months, especially with regards to issues of concern to potential regional rival China, has caused confusion in Allied capitals and consternation in Beijing. It seems related to the rather unrealistic hope that China will provide assistance as its North Korean ally advances toward development of a nuclear delivery capability that could strike the American homeland. As the reality sets in that the Chinese cavalry is not about to ride to the rescue of Americans facing an escalating North Korean nuclear threat, a more traditional East Asian policy approach may emerge in the months ahead. One can only hope.