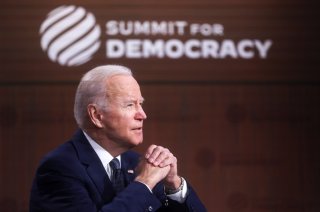 Washington’s much-ballyhooed virtual democracy summit on December 9 and 10 is already generating justifiable criticism. Centering U.S. foreign policy on democracy promotion —rhetorically, if not substantively—brings back memories of George W. Bush’s ill-fated effort. Playing the democracy card has also exacerbated already serious tensions between the Biden administration and Russia and China. Both powers interpret the summit as an effort to enlist other nations in a hostile, containment policy directed against them.

The worst feature of the summit, though, is the brazen hypocrisy of U.S. policy on democracy. True, this has been a long-standing, embarrassing characteristic of Washington’s foreign policy. Many of the “Free World” allies that U.S. leaders embraced, funded, and armed throughout the Cold War were actually brutal and corrupt tyrants. What mattered to U.S. officials was that those regimes were reliably anti-communist and especially anti-Soviet. The nature of their domestic rule could be—and usually was—overlooked. The invitation list to Biden’s summit underscores that the U.S. double standard on democracy is alive and well.

Although the administration excluded all of the governments that are obvious, indisputable autocracies, some of the invitees warranted a reaction of surprise, if not outright disgust, from people truly committed to democratic norms. Despite the State Department’s own reports confirming that Pakistan and the Philippines are frequently guilty of “extrajudicial killings” and other civil liberties abuses, representatives of both governments will participate in the summit. Likewise, India and Brazil are given the honor of providing input on democracy promotion, despite their own dramatic backsliding into authoritarian practices in recent years. Kosovo also made the invitation list, even though key members of the country’s political elite face charges of war crimes and crimes against humanity before an international tribunal. Charges in this case include the systematic murder of prisoners of war to sell their organs on the international black market.

A clear pattern emerges regarding inclusions and exclusions, especially in murky or marginal cases. Two types of governments make the invitation list even when there are serious questions about their own commitment to democracy. In the first category are the significant geopolitical players that Washington is courting for strategic objectives. This category is why there was almost no chance India or Brazil would be snubbed.

U.S. leaders want India to become an active member of a containment policy directed against China. Both the Trump and Biden administrations lobbied aggressively to convert the Quadrilateral Security Dialogue, commonly known as the Quad, which has Japan, Australia, India, and the United States as members, into a military alliance for that purpose. Although the Quad has conducted a growing number of joint military exercises, Indian prime minister Narendra Modi has thus far refrained from making that policy commitment, but Washington’s courtship continues. Brazil is a key economic and political player in the Western Hemisphere, and Washington is especially concerned about President Jair Bolsonaro’s government and its growing economic ties with Russia and China. Given this geopolitical context, Biden administration officials will not allow defects in either country’s domestic governance to be an obstacle for strategic objectives.

The way for smaller countries with highly questionable democratic credentials to get Washington’s imprimatur for the democracy summit was to obediently follow the U.S. lead on important international issues. It is notable, for example, that Poland and even Ukraine received invitations to the conclave, but NATO member Hungary did not. Granted, there is little question that Hungary’s government under Prime Minister Victor Orban has displayed growing autocratic tendencies. However, Poland has exhibited similar troubling behavior, albeit in a slightly milder form. There is one glaring difference, though; Warsaw enthusiastically embraces Washington’s confrontational policy toward Russia, while Budapest is far more ambivalent.

Washington’s hypocrisy is even more evident in Ukraine’s summit invitation. Ukraine has been even more blatant than Hungary in silencing opposing media outlets and committing other civil liberties abuses. In its 2021 report on political freedoms, Freedom House gives Hungary a score of sixty-nine, putting it in the “partially free” category. But Ukraine receives an even more anemic score of sixty—continuing its steady decline over the past several years. Indeed, several of Washington’s other invitees do not fare well either. India’s score is sixty-seven; the Philippines, fifty-six; Kosovo, fifty-four; and Pakistan, a dismal thirty-seven—barely keeping that country out of the “unfree” category. However, Washington has decided to treat Ukraine as a NATO member in everything but name and to make Kiev a front-line ally against Russia. Consequently, Ukraine’s deterioration of democratic values and practices is considered immaterial.

Such a flagrant double standard should embarrass the Biden administration. The democracy summit demonstrates that Washington’s alleged commitment to freedom and democratic values as a key feature of U.S. foreign policy is as inconsistent and hypocritical as ever. Biden and his advisers richly deserve whatever scorn they receive.