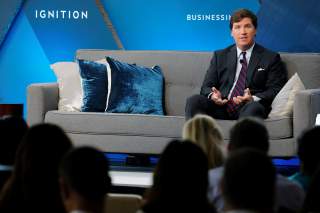 For those hoping that President Donald Trump was marching toward a more conventional presidency, Wednesday provided the best day of news in months. Not only had former White House Chief Strategist Steve Bannon been excised by the president himself from the official Trump movement, but he’d also been defrocked from Breitbart News, an organization he’d overseen since before Trump’s rise to the fulcrum of American politics. To cap it off, the president appeared willing to completely backtrack on immigration pledges, telling Sen. Dianne Feinstein that he was open to guaranteeing DACA up front, and earlier in the week, he said he was willing to “take the heat”—absorb any incoming fire from immigration hardliners.

“Incredibly stunned,” is how one Democratic Hill staffer for a senior Democratic senator had put it to me, on Trump’s comments to Feinstein. “The president has no clue what his position is. She said something that sounded good and he reflexively went ‘Sure!’” The president was corrected by House Majority Leader Kevin McCarthy during the exchange, and some of Trump’s lines were scrubbed from the official administration transcript of the meeting. Says the Hill source: “When he said, ‘I think what Dianne meant... ’ you could hear her in the background go, ‘No it’s not, Kevin!’”

But less than a day of action has transformed the landscape of the debate. On Thursday, Sen. Jeff Flake was hailing the fact the Senate “Gang of Six” had a deal on the matter. By Thursday afternoon, that proposed deal was dismissed by the president, and by Thursday evening, the capital was embroiled in the fracas over arguably the most controversial remark by Donald Trump of his tenure. And Flake has quickly reverted to his role as the president’s foe, tweeting Friday morning: “The words used by the President, as related to me directly following the meeting by those in attendance, were not ‘tough,’ they were abhorrent and repulsive.”

And what cannot be discounted as leading factor in the president’s seeming reversal has been the pressure put on the White House by immigration hardliners. “Trumpism without Trump” has been widely eulogized after Bannon’s tumble. But if the president and his allies took their victory over Bannon as broad license to maneuver toward the establishment, it is clear that, on immigration at least, that’s a nonstarter.

The torrent of criticism from the populist Right has been considerable. “If you see that kind of deal come out of Congress, and you may, the Republican Party is done, it's over, it's toast. it will be a short epitaph too, suicide,” Fox News grandee Tucker Carlson said on his show Wednesday. Sometimes Trump confidante Ann Coulter was more pointed, penning a column titled, “It Turns Out Bannon Was Trump's Brain.”

While much of the establishment D.C.—and the country—was aghast Thursday evening at the president’s lavatorial allusion to Haiti, El Salvador and African nations, Carlson and Coulter were buoyant. “He's trying to win me back,” Coulter tweeted. Carlson didn’t hold back: “Option A: El Salvador isn't a ‘s--thole,’ so they don't need 17 years of Temporary Protected Status, and migrants from there should be sent home immediately. Option B: El Salvador is, in fact, a ‘s--thole.’” And some in the White House concede this will likely aide with president with his base.

The seeming success (for now) of Coulter and Carlson to prod the president back into their ranks on this issue raises the question: can the mostly more moderate voices that remain in the administration continue to be thwarted from the outside?

At least one Republican candidate seeking to win a U.S. House seat laments Bannon’s reversal of fortunes, commenting to me: “Bannon represented the future of the Republican Party: one that was geared towards the working man by limiting illegal immigration, ending foreign wars against American interest, taxing the 1% , bringing back protectionism and tariffs.”

Carlson has been critical of Bannon—seeing him as sort of a “poseur”—but like the former Breitbart chief, he has be unafraid to lob criticism at the administration when it deviates from the nationalist-populism that vaulted Trump to power.

In recent days, Carlson told Freddy Gray of the London Spectator that the concern in D.C. over Iran is vastly overblown, and that he doesn’t believe that Bashar al-Assad was responsible for last April’s chemical attack in Syria—the pretext of President Trump’s targeted bombing of that country. He also chided the president’s tax reform plan, to this point the administration’s most salient achievement, as a sellout to Trump’s political base.

So what does a Trumpist, divorced from Bannon, foreign policy look like? One critical area where this will be tested immediately is North Korea, particularly with all the potential fire and fury that could be sparked by the upcoming Pyeongchang Olympics in February. Bannon has noted to me that he views North Korea as a largely unsalvageable distraction. Carlson agrees, noting that Pakistan is a far more concerning case and that United States has allowed its nuclear armament for decades. But Bannon’s old enemies in the administration, namely National Security Advisor H. R. McMaster, see it differently. McMaster has emerged as a hawk’s hawk on North Korea, including entertaining some sort of first strike on the country.

Maybe the conservative war for Trump’s brain isn’t over. Instead, it could just be getting started.