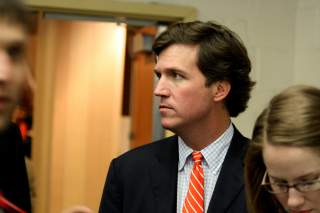 Though he eschews labels, Carlson sounds like a foreign-policy realist on steroids: “You can debate what’s in [the United States’] interest. That’s a subjective category. But what you can’t debate is that ought to be the basic question—the first, second and third question. Does it represent our interest? . . . I don’t think that enters into the calculations of a lot of the people who make these decisions.” Carlson’s interests extend beyond foreign policy, and he says “there’s a massive realignment going on ideologically that everybody is missing. It’s dramatic. And everyone is missing it. . . . Nobody is paying attention to it!”

Carlson seems intent on pressing the issue. The previous night, in his debate with Peters, the retired lieutenant colonel said that Carlson sounded like Charles Lindbergh, who opposed U.S. intervention against Nazi Germany before 1941. “This particular strain of Republican foreign policy has almost no constituency. Nobody agrees with it. I mean there’s not actually a large group of people outside of New York, Washington or L.A. who think any of this is a good idea,” Carlson says. “All I am is an asker of obvious questions. And that’s enough to reveal these people have no idea what they’re talking about. None.”