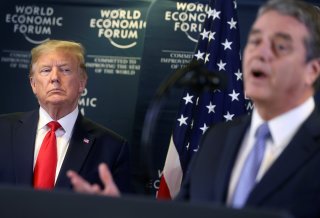 Recently, several U.S. lawmakers have published articles calling for the United States to walk away from the World Trade Organization—an international organization that the United States breathed into existence. Interestingly, while these lawmakers get the initial action right—we certainly do need to walk away from the WTO—they get the reasons why as well as what actions to take next all wrong. They insist that global trade is bad (it’s not), and how America needs to close its doors and economically fix itself in isolation from the world (it can’t). In effect, these arguments amount to a multi-trillion dollar case of misdiagnosis, coupled with a half-remedy prescription; America does need to pull out of the WTO, not because global trade is bad, but because the nature of global trade has radically changed since the WTO was formed, and the WTO can no longer adapt to meet the times. There’s a better way.

Why We Should Walk Away

Change is what the WTO needs most, but can’t have. The WTO requirement for unanimous agreement among its 160+ member nations to make changes to any rule governing international trade makes adapting the organization, for all intents and purposes, impossible. When the WTO was conceived in 1995, Huawei-sized State-Owned Enterprises, trillion-dollar Sovereign Wealth Funds, and nations with a moon exploration program still claiming UN “developing nation” status were simply unimaginable. As a result, strict rules governing these unimagined entities weren’t included in the WTO’s original charter. In 2020, they are quite real, and they’ve become the primary threat to free trade that our legislative leaders are appropriately concerned about. The WTO’s consensus-rule architecture can’t pass regulations to control these threats—the WTO has been unable to amend its Agreements for almost twenty years now—and WTO membership prevents nations from taking the necessary sovereign actions to protect themselves. The WTO is still working for the United States today but it won’t be long before these pernicious economic threats reverse America’s hard-won gains. This is why the United States has to walk away from the WTO.

What Next? How to Remake the WTO

America’s still-undisputed status as the world’s largest and most dynamic economy commands an almost magnetic power of attraction that it should harness to kick-start a better-functioning, next-generation WTO that retains all of the good that the WTO brought, and re-engineers all the bad—call it the Global Trade Union, or GTU, for the sake of this argument. As a start-up strategy, the U.S. should focus on partnering with proven, honest trading partners that quickly add substantially to the size of the GTU’s GDP relative to total global GDP. The bigger the GTU’s market size, the more attractive it will be as a destination for global trade.

Based on these standards, the recent NAFTA re-boot, the USMCA, is an ideal base to build the GTU on. Consisting of the United States, Mexico and Canada, the USMCA represents almost 25 percent of global GDP, as well as being allied nations known (generally) to follow a rules-based order. The UK, which has freshly withdrawn from the European Union, is in serious need of open access to a big, fair-dealing market like this and represents another ideal candidate for immediate GTU membership. Logical follow-on partners include Japan, Korea, and Israel, who not only represent large, highly developed economies but are global leaders in technological innovation and happen to be key U.S. security allies as well—an important consideration for first-tier GTU membership.

For the GTU to work, it also has to be decisive. Without being prescriptive, the GTU could consider a modified, more decisive version of the United Nation’s Security Council and General Assembly arrangement. Alternatives abound, but whatever decisionmaking system is ultimately adopted, the GTU has to offer members a fair share of decisionmaking power without giving any single nation veto authority.

How to Sell It

The GTU represents an opportunity for America to keep the best of global trade, while getting rid of the worst, but it needs strong bipartisan leadership to work, starting in the White House. Presidential leadership is key, and he should start the process by initiating a bipartisan conversation in the legislature. This dialogue will generate the political roadmap that the president’s GTU task force will need to guide their negotiations and give the GTU a running start towards ultimate Congressional approval—which, like the WTO before it, is Constitutionally required. These conversations should also bring in essential American GTU constituents, including business, labor, capital and defense. Understanding the interests of these disparate groups early on will steer GTU development towards achieving them, giving it a better chance at surviving a partisan congressional approval process.

Ultimately, the WTO can no longer ensure future free trade remains fair but free global trade remains an extraordinarily productive force for the U.S. economy, despite the uneven distribution of its benefits. So, while walking out of the WTO is, in part, the right action for America, remaining outside of a global free and fair-trade regime is not. Understanding why to leave, and what to do next, is the key difference to sustaining U.S. economic strength in the twenty-first century. To get there, America needs to join together and honor the end of the WTO while we work to make something better: The WTO is dead. Long live the WTO.

CDR Daniel Kwiatkowski is currently a student at the U.S. Naval War College. The views expressed here are his personal observations and do not reflect any official position of the U.S. Navy or the U.S. government.