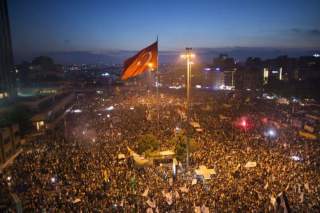 Turkey’s recent June elections have produced a religiously diverse parliament that the country has not seen since the 1950s. A total of seven non-Muslim deputies—three Armenian Apostolic, one Arab Orthodox, one Syriac Christian, and two Yazidis—were elected from the lists of three different parties. It is a mistake, however, to dwell on the success of minority candidates in a country at risk of moving not toward greater tolerance, but to scapegoating and religious and ethnic exclusivism.

Optimists argue that, after the recent elections which delivered a setback to President Recep Tayyip Erdogan’s bid to consolidate power, Turkey’s political climate is finally ripe for the pluralism that has long been the goal of a new generation that is coming of age. But this is not the arrival of a Turkish political spring. If anything, we may be about to enter a long winter of discontent.

In theory and in practice, Turkey can and should be a beacon of religious pluralism and a model for peaceful coexistence in a region plagued by religious coercion, mass killing, and ethnic cleansing. The Gezi Park protests of June 2013, the first large-scale challenge to Erdoğan’s autocratic rule, produced much celebrated scenes of diversity: women in headscarves rallying alongside LGBT activists, Marxists standing guard to protect “Anti-Capitalist Muslims” during their prayers, and atheists and Muslims breaking fast together at opentable gatherings.

Such celebrations of diversity, however, fail to conceal the enormity of sectarianism and polarization in today’s Turkey. Under twelve years of Erdoğan’s Justice and Development Party— Adalet ve Kalkınma Partisi (AKP)—rule, the country has been a steady diet of hate, prejudice, and intolerance by top government officials. Turkey’s political culture also enabled perpetrators of hate speech and crimes not only to escape justice but to enjoy praise and promotions. This toxic climate, as the Anti-Defamation League (ADL)’s Global Index of anti-Semitism shows, has produced a Turkey that is even more anti-Semitic than Iran. According to the 2015 survey, an appalling 71 percent of Turkish citizens harbor anti-Semitic attitudes.

To make matters worse, Turkey’s new parliament, celebrated by many pundits for its minority members, has a fault line that could further escalate Turkey’s sectarian tensions. Two of the four parties represented in the Turkish parliament—the Islamist-rooted AKP and the right-wing nationalist Nationalist Movement Party (MHP)—are comprised entirely of Sunni Muslim deputies, with the exception of a token Armenian elected on the AKP list.

Moreover, although Alevis—adherents of an offshoot of Shi’ite Islam who make up 10 to 15 percent of the population—gave the AKP and MHP 7 percent of their vote, these parties chose to exclude non-Sunnis entirely from their ranks. If the current coalition talks lead to an AKP-MHP partnership, the governing bloc and its cabinet would exclude participation of religious minorities.

Were this AKP-MHP coalition to materialize, ethnic diversity would also suffer. The People’s Democratic Party (HDP) and the Republican People’s Party (CHP) combined received 64 percent of the Kurdish vote. But the AKP’s coalition with the MHP would leave a significant majority of Kurds out. This could only spell trouble for Turkey’s precarious Kurdish peace process and strained relations with Kurdish entities across the region.

Such policies of exclusion are President Erdoğan’s preference. After all it was under Erdoğan’s leadership that the AKP turned Alevis and non-Muslim minorities into scapegoats. While the AKP group had three Alevi deputies in 2007, the number came down to one in 2011, and finally to zero in 2015. This was accompanied by the rise in Erdoğan’s hate speech targeting Alevis, especially following the election of an Alevi as the leader of the secular opposition party CHP in May 2010. Erdoğan’s loyal followers in the AKP and among civil servants did not hesitate to follow suit.

This toxic political climate has become contagious. There are signs that the MHP might be joining Erdoğan’s politics of sectarian hate as part of an attempt to court the AKP for a potential coalition partnership. The MHP deputy whip recently announced that his party chose not to vote for the CHP’s candidate for the speaker of the parliament, because it would be perceived as voting for a party “without religion and without faith,” a common slur against Alevi and secular individuals in Turkey.

As the makeup of the next Turkish government hangs in the balance, it is clear that the AKP and the MHP could easily build a monolithic coalition bloc catering to Turkish and Sunni exclusivist sentiments. This partnership would have 57 percent of the popular vote and more than three-fifths of the seats in the parliament necessary to amend the constitution unilaterally to empower Erdoğan with a more muscular presidency. Such an ostensibly solid and stable alliance, however, would come at the expense of Turkey’s already strained democracy and pluralism.

Turkey survived two rounds of Nationalist Front coalitions in 1975 and 1977 which also brought right-wing nationalists and Islamists together. Citizens who endured those years vividly remember the dark days of repression and mass murder. The ensuing polarization and escalation of violence left more than 5,000 people dead on both ends of the political spectrum in less than five years, and paved the way for sectarian clashes and pogroms against Alevis.

If Turkey chooses the path of ethnic and sectarian polarization once again, it will not take long for the country’s false spring to turn into an intolerant winter.

Aykan Erdemir is a former member of the Turkish parliament and a nonresident fellow at Foundation for Defense of Democracies. @aykan_erdemir.