Turkey Could Become the Middle East’s Next Narco-State 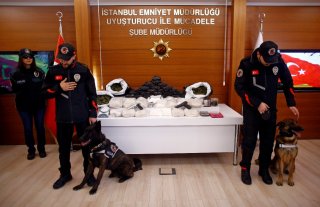 The assassination of the Turkish Cypriot casino tycoon Halil Falyali last week was the latest episode in Turkey’s underground wars over narco-trafficking and illicit finance. The Turkish mobster-turned-whistleblower Sedat Peker accused Falyali last year of being a key player in the cocaine trade and colluding with Erkan Yildirim, the son of former Turkish prime minister Binali Yildirim. Peker alleged that Turkey, which has long been part of a major route for the heroin trade, has become a key hub for cocaine, too, following the nearly twenty-year rule of the Islamist-rooted Justice and Development Party (AKP). These developments raise questions about whether Turkey is becoming yet another narco-state in the Middle East, alongside Lebanon and Syria.

Timur Soykan, one of Turkey’s leading investigative journalists focused on narco-trafficking, claimed that Falyali, who is known for his extensive collection of compromising videos of leading political figures, might have used such a tape to blackmail Erkan Yildirim into setting up a cocaine route to Latin America. Erk Acarer, a Berlin-based investigative journalist, also claimed that Falyali was blackmailing politicians and civil servants with “inappropriate videos.”

A week before Falyali’s assassination, Turkey’s interior minister, Suleyman Soylu, bragged that drug busts in the country reached an all-time high since the establishment of the Turkish Republic. In 2021 alone, he added, the police confiscated some 2.8 tons of cocaine. What the interior minister presented as a success story appears to others as the result of an alarming trend. Cocaine busts in the country have been on a steady rise over the last four years: 1.5 tons in 2018, 1.6 tons in 2018, and some 1.9 tons in 2020.

Last June, in what amounted to the biggest cocaine bust in Turkish history, police seized 1.3 tons of the drug hidden amid bananas shipped from Ecuador to Turkey’s Mediterranean port of Mersin. Shortly thereafter, the police discovered an additional half-ton of cocaine concealed in another shipment from Ecuador at the same port. The seizures in these two cases alone exceed the annual totals from only a few years ago.

These figures are simply the tip of the iceberg and do not include cocaine shipments headed for Turkey but captured in Latin American ports of exit. Last June, for example, the Colombian police seized 4.9 tons of cocaine in the country’s southwestern port of Buenaventura en route to Istanbul’s Ambarli port. Similarly, the previous month, Panamanian authorities captured 1.3 tons of cocaine en route from Ecuador’s largest port, Puerto Bolivar, to Mersin. These two busts alone were more than twice the size of the total cocaine busts in Turkey last year.

Many Turkish citizens suspect that senior Turkish officials are in bed with kingpins, facilitate narco-trafficking, and shield traffickers. Peker’s allegations that Yildirim is a central figure in cocaine trafficking through Turkey prompted the former prime minister’s son to sue Peker, who has been in self-imposed exile in the United Arab Emirates since last year.

Peker claimed that Yildirim, who owns a maritime shipping business implicated in the Malta Files—a massive trove of leaked documents revealing illicit financial activity that was published by a European investigative journalism network in 2017—visited Venezuela twice in 2021 to set up a new trafficking route beyond the reach of the U.S. Drug Enforcement Agency (DEA). Turkey’s former prime minister defended his son by claiming that he had traveled to Caracas to deliver Covid-19 test kits and masks, a claim refuted by both Turkish customs records and testimonies of Turkish citizens residing in Venezuela. Falyali, meanwhile, was under criminal indictment by a Virginia federal court for his alleged role, as laid out in a DEA special agent’s affidavit, for laundering drug proceeds through the U.S. financial system.

What further raises suspicions about the complicity of Turkish officials is that the cocaine shipped to Turkey comes disproportionately from Ecuador’s Puerto Bolivar port, which a Turkish company backed by Turkish president Recep Tayyip Erdogan won a fifty-year concession to operate in 2016. This week, Israeli authorities reportedly disqualified that Turkish port operator from participating in Haifa Port’s privatization tender due to the alleged Hezbollah links of one of the owners and his involvement with a shipping company operating Lebanon’s Beirut Port. Of the major drug busts in Turkey in 2021, four of them originated from Puerto Bolivar, not including the 1.3 tons of cocaine shipped from the same port, destined for Turkey but seized in Panama.

However, what makes the AKP-linked figures’ alleged impunity most visible to Turkish citizens are not the major cocaine busts at seaports or airports, but the involvement of low-level party cadres.

In March 2021, images of Kursat Ayvatoglu, the parliamentary aide of AKP deputy chair and lawmaker Hamza Dag, snorting cocaine in the driver’s seat of a luxury vehicle went viral and rocked the country. Before his involvement in politics in the AKP ranks in 2014, Ayvatoglu, a high school dropout, was a humble graphic designer driving a barely functioning car in the small northwest Black Sea town of Kastamonu. After working for the AKP’s local mayoral candidate Tahsin Babas and his subsequent mayoral victory, Ayvatoglu has mysteriously gone from rags to riches. When his images went viral in March 2021, Ayvatoglu quickly denied the allegations and managed to walk free by simply declaring that he was snorting “powdered sugar.” Similarly, in 2020, when Turkish customs officers seized 100 kg of heroin in the car of a former press consultant at the Turkish embassy in Brussels with close ties to senior AKP figures, Turkish authorities hid the news from the press for two weeks and later introduced a gag order.

Turkey’s ongoing financial meltdown and its growing need for foreign currency amid the depletion of its central bank’s net international reserves will only make the country’s political elite and struggling citizens more susceptible to the appeal of narco-dollars. Traffickers appear to be enjoying impunity, and the drug busts feel more like window-dressing attempts aimed at hiding the real size of the iceberg. If Turkey joins Syria and Lebanon as the third narco-state in the Eastern Mediterranean, this will only compound the region’s trafficking and money laundering problems, while also presenting illicit non-state actors greater opportunities to exploit.

Aykan Erdemir is a former member of the Turkish parliament and senior director of the Turkey Program at the Foundation for the Defense of Democracies (FDD).

Kursat Gok is a graduate student at the Johns Hopkins University – Paul H. Nitze School of Advanced International Studies (SAIS) and a research intern for the Turkey Program at the Foundation for Defense of Democracies (FDD).