Turkey Has Become an Uncertain Ally 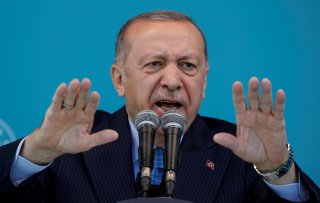 The Biden administration has done yeoman’s work promoting transatlantic unity to punish Russia for attacking Ukraine and limit its ability to aggress against other countries in the future. However, Turkey, a NATO member, is an outlier and uncertain ally. Turkey criticized Russia for attacking Ukraine but refuses to join multilateral sanctions aimed at limiting the Kremlin’s ability to finance and wage war. Turkey’s President Recep Tayyip Erdogan plays both sides of the conflict to enhance his regional power and economic benefits.

Turkey has broken ranks with international consensus. Erdogan believes that preserving economic relations with Russia and Ukraine will cushion the conflict’s impact on Turkey’s economy, and benefit Turkey politically.

Doing business with Russia is a perilous decision for Turkey. Turkish private and state banks can face international scrutiny and the possibility of severe penalties for violating sanctions on Russia. Penalties could affect Turkey's ability to borrow from international markets.

Erdogan is focused on maintaining Turkey’s economic relations with Russia. Turkey is Russia’s fifth-largest export market, and Russia is Turkey’s tenth largest. Last year, Russia supplied Turkey with about 50 percent of its imported gas, 17 percent of oil, and about 40 percent of petrol. Russia is also a major export market for fruits and vegetables from Turkey. In 2021, Turkey exported a record of nearly 1.5 million metric tons of fresh fruit and vegetables to Russia. Russia accounted for 56 percent of Turkish grain imports, valued at $2.24 billion.

Russian tourism is a further key contributor to Turkey’s economy, with seven million Russians visiting in 2019. Though the Covid-19 pandemic affected travel, Turkish officials predict that Turkey will break a record for tourists in 2022, and Turkish banks have expanded the Russian payment system for electronic fund transfers, “Mir,” to facilitate tourist payments.

Many countries have denied Aeroflot landing and overflight rights, but Turkey keeps its airspace open to the Russian state carrier. The European Union prohibits Russian vessels from accessing ports in EU countries, but Turkey welcomes them.

Moreover, Turkey refuses to join NATO members who are sending military equipment to Ukraine. As Ukrainian cities were bombarded with missiles and air power, Turkey rejected Washington’s proposal to transfer its Russian-supplied S-400 surface to air defense missiles to Ukraine. Ankara also refused to send other Soviet-era weaponry that could help Ukraine’s self-defense.

The S-400 system is a sore spot in U.S.-Turkey relations. In response to the purchase, members of U.S. Congress pledged to sanction Turkey in accordance with the Countering American Adversaries through Sanctions Act (CAATSA), and the U.S. Department of Defense suspended Turkey’s participation in the F-35 stealth fighter program.

Meanwhile, Russia is helping to build Akkuyu, a Turkish nuclear power plant in Mersin Province. Russian investment is covering the cost of $20 billion, and Erdogan is committed to building two new plants—tethering Turkey’s nuclear ambitions to Russia for the foreseeable future.

Turkey has split on Russia’s oligarchs, too. These Russian elites accumulated vast wealth during the period of privatization in the 1990s and wield enormous influence through their wealth and personal association with President Vladimir Putin. The United States, Canada, Japan, and European countries sanctioned Putin and the oligarchs directly, freezing their assets, restricting their travel, and targeting their business ties.

But the oligarchs have tried to hide their wealth, and Turkey has become the most popular destination for oligarch-owned yachts and money. On a year-over-year basis, sales of high-end real estate to Russians have nearly doubled. Many Russian oligarchs have set up new bank accounts in Turkey to shield their assets from foreclosure. In addition, Russian companies are repackaging themselves as Turkish entities.

The EU adopted sanctions against 217 individuals, including oligarchs, and eighteen entities including a full ban on four Russian banks. Russian banks have been disconnected from SWIFT, the international system for processing payments, which has further isolated the Russian financial sector from the global financial system. Additionally, the G-7 recently announced travel and banking sanctions on 2,600 Russian and Belarusian officials, as well as Gazprom executives.

Oblivious to the cost of doing business with Putin’s inner circle, Erdogan seeks to broaden Turkey’s regional influence by serving as mediator between Russia and Ukraine. In March, Turkey brought Russian and Ukrainian officials together in Antalya and Istanbul; discussions failed to produce any tangible breakthroughs.

As two Eurasian countries ruled by autocrats, it makes sense that Russia and Turkey would share a certain strategic alignment. Putinism, the government system in Russia, is characterized by the concentration of political and financial powers in the hands of former intelligence officials. Erdoganism is a form of populist authoritarianism. Corrupt at its core, it is chauvinistic, nationalistic, and discriminatory towards ethnic and religious minorities. In both countries, government exists to advance the interests of leadership rather than to serve the electorate.

Putin’s Russia is a lost cause, run by gangsters and kleptocrats. Turkey under Erdogan’s dictatorship is also on the brink of pariah status. Erdogan hopes that war and sanctions will distract Turkish voters when they go the polls in 2023.

Turkey is at a fork in the road. Down one path lies reform with tolerance to those who want a truly democratic Turkey, which respects minority and human rights. Down the other lies greater kleptocracy and human rights abuses, as Turkey becomes an outlier in the Euro-Atlantic community.

David L. Phillips is Director of the Program on Peacebuilding and Human Rights at Columbia University. He served as a Senior Adviser and Foreign Affairs Expert at the State Department during the Clinton, Bush, and Obama administrations.