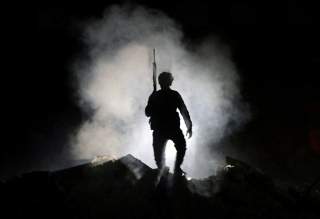 In a recent statement, Turkish president Recep Tayyip Erdogan said the United States is working against the interests of Turkey, Iran and maybe Russia in northern Syria, where it is sending military aid to the Syrian Kurdish militia. “If the United States says they are sending 5,000 trucks and 2,000 cargo planes of weapons for the fight against Daesh (Islamic State), we don’t believe this,” Erdogan told members of his ruling AK Party in parliament. “It means you (the US) have calculations against Turkey and Iran, and maybe Russia.” By galvanizing a common front of anti-U.S. sentiment in all three countries, Erdogan seeks to downplay Ankara’s escalating tension with Russia and Iran and repair ties. If he pulls it off, Washington will have to deal with a less compromising Turkey shortly before Secretary of State Rex Tillerson’s visit to Ankara.

Erdogan’s statement comes at a time as the tension between Turkey, Russia and Iran over Syria is mounting. The three countries forged a partnership in Syria and have been leading the Syria talks in Astana, the capital of Kazakhstan. Frustrated with the U.S.’s cooperation with the Syrian Kurdish militia, the YPG, Ankara turned to Moscow and Tehran for help. Turkey set up “observation posts” in Syria’s northwestern Idlib province—the last stronghold of the anti-Assad opposition—as part of efforts by the three countries to establish deescalation zones. But Turkey’s real intention was to rein in the YPG, which controls the Afrin region next to Idlib. Turkey hoped that it would move into Afrin and its Astana partners would look the other way. Ankara thought it got its wish when Russia, which controls the skies over Afrin, finally gave the green light to the Turkish military incursion into the Kurdish enclave. Iran and the Assad regime acquiesced to Turkey’s move.

But the recent developments on the ground suggest the way forward might not be as smooth and the partnership with Russia and Iran might not be as strong as Ankara had hoped. Russia is frustrated with Turkey’s failure to roll back the Al Qaeda–linked Hayat Tahrir al Sham’s influence in Idlib while Iran and the Assad regime have grown increasingly uncomfortable with Turkey’s move into Afrin. After Turkey’s recent military incursion into the Kurdish enclave, the Assad regime allowed the YPG to deploy reinforcements to the area through regime-controlled territory. This week, Iran asked Turkey to stop its military offensive in Syria, claiming the operation was a breach of Syrian sovereignty and would increase the tension further. Earlier, the regime and Iran-backed forces attacked a Turkish convoy in Aleppo. Last week, opposition forces downed the Russian plane using a man-portable air-defense system (MANPADS) in Idlib. Hayat Tahrir al-Sham claimed responsibility for the attack. Some in Moscow are blaming Turkey for the attack, pointing to what they see as Turkey’s murky relationship with the militant group.

All these are the latest in a series of incidents that suggest serious cracks in the tenuous partnership between Russia, Iran and Turkey. In December, Russian forces based in Syria’s Khmeimim air base were hit with artillery fire and lost two soldiers. Russian sources pointed the blame at Turkey saying the artillery used in the attack entered Syria from Turkey. After the incident, Russia sent a letter to Turkish Chief of Staff urging Turkey to make sure the armed Syrian opposition groups under its control respect the de-escalation agreement. A few days later, Turkey’s foreign ministry summoned Russian and Iranian ambassadors to criticize what Ankara says Syrian government forces’ escalation of violence in the city of Idlib.

What makes the escalating tension with Russia and Iran particularly troubling for Ankara is Turkey’s growing isolation. The country is fast approaching a military crisis in its relations with its NATO ally: the United States. The tension spiked after President Erdogan threatened military action against Manbij, a Kurdish enclave east of Afrin where there are around 2,000 American Special Forces. If Erdogan follows through, the move could potentially bring Turkish forces into confrontation with those of the United States. Washington is pushing to prevent a Turkish incursion into Manbij. President Donald Trump’s national security adviser H. R. McMaster met with his Turkish counterpart in Istanbul last week to discuss the issue and Secretary of State Rex Tillerson is scheduled to hold meetings with his Turkish counterpart later this week.

For its part, Washington faces tough choices too. Turkey demands the withdrawal of Kurdish forces from Manbij. If the United States agrees, it could threaten its plans to stabilize a swath of northeast Syria. If it doesn’t, the relations with its NATO ally could “completely break down” as recently warned by Turkish foreign minister. A compromise solution would be disbanding the Manbij Military Council –providing security to the town. The Council is allied with the YPG. An American effort to replace the MMC with more diverse group of local actors who are not overtly pro-YPG could provide a face-saving exit for President Erdogan who has been publicly warning about the “imminent Manbij operation.” Whether Erdogan will settle on a middle ground depends on improved Turkish relations with Russia and Iran. It is particularly important for Ankara to maintain Russia’s tacit consent for Turkey’s military operation in Syria and the leverage Moscow can use over Iran and the regime to make sure they do not spoil Turkey’s plans.

Erdogan is trying to play down the disagreements with his Astana partners by suggesting that U.S. support for the YPG is an act against Turkey, Iran and Russia. He also hopes this will keep the pressure on Washington at a time when Turkish and U.S. forces might clash in Syria. Erdogan knows that Turkey cannot take on Russia and the United States at the same time. If he manages to ease tensions with Russia, Ankara will be less interested in what Secretary Tillerson has to offer to prevent a Turkish incursion into Manbij.