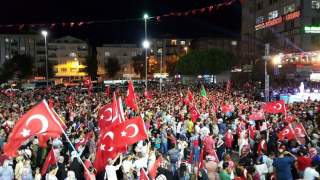 Visiting Turkey is always an eye-opener. This time more than ever.

When I landed in Istanbul four days after the botched military coup on July 15, I had fairly clear views about what was going on. While I never gave much credence to rumors about a staged coup—a desperate move for a desperate situation in which President Erdoğan was hardly in—I thought that the Turkish president would ride the wave of popularity in the aftermath of the failed coup to accelerate his plans for an even greater centralization of power, crowned by a presidential system. At one level this is precisely what is happening. But as the layers of the Turkish onion are peeled off, the greater the complexity which emerges. There is no black and white story of what happened, is happening and will happen in Turkey. It is a complex story with many shades of grey.

No sooner were the crowds pouring into the streets of Istanbul and Ankara, sealing the fate of the clumsy coup attempt, than the AKP blamed Fethullah Gülen’s movement. That Gülen, the self-exiled preacher in Pennsylvania, was on Erdoğan’s blacklist has been known for some time. Since Turkey’s Islamist camp split in December 2013 an undercover war has been underway between the two. Notably, the AKP government sought to muzzle the Gülenist press, hamper its schools, and purge its suspected members and sympathizers from the police and the judiciary. Key replacements within the military were planned for this summer.

Making matters worse for the government’s international reputation, the Gülenists were not the only ones whom Erdoğan sought to silence, sideline or eliminate. Be it by attacking the Gezi protesters or critical journalists, outspoken academics or the Kurds, it has been commonplace to talk about Erdoğan’s authoritarianism, disdain for checks and balances and sheer paranoia.

But the attempted military coup did happen. Perhaps the government knew it was in the making, perhaps not. None of my Turkish interlocutors are ardent supporters of their president. None believed the coup attempt was staged. Had it succeeded, the coup would have likely seen the assassination of the president and a bloodbath in the country. With half the country unreservedly backing the AKP, those people would not have stayed put. A successful coup would not have rewound Turkey back to the dark days of the 1980s. It would have fast forwarded the country to a far darker place.

All of my interlocutors believed in the Gülenists’ longa manus in committing this crime. Talk was all about whether the Gülenist involvement in the plot amounted to 60 percent, 70 percent or even more, with minority support coming from other strands of the military. The fog behind this plot is still thick. Yet all my interlocutors had no doubt that the Gülen movement was involved in the plot and therefore represented an existential threat to the Turkish state and democracy.

And this is where the real problem begins. While the ultimate political objectives of the Gülen movement remain a mystery, what is well know is that its members and sympathizers have been systematically placed within the military, the police, the judiciary and academia. Also well-known is the remarkable ability of these public employees to maneuver within the system, always careful to avoid formally breaking rules and laws. Tackling this problem is no simple feat.

The sheer complexity of unpicking a tightly knit movement permeating key nodes across state structures would make any government balk. More so a leader who by nature has no verve for gradual and tempered moves. This is not to justify the ongoing mass arrests and purges. It is rather to appeal for greater understanding. It is too easy to read today’s Turkey through the lens of legitimate criticism of its leader. That critique, however, should not cover our assessment of what is going on, the depth of the crisis and the sheer complexity of seeking a democratic solution to it.

So what to do? The temptation to resolve a genuinely existential question through existential means—by pausing the rule of law—is high. Worst still if the pausing of rules and laws is used to muzzle dissent. But it will not work. Mass purges pursued through the systematic bending of the rule of law are not new in Turkey. The Ergenekon and Balyoz cases pursued by the Gülenists at a time in which they worked hand in glove with the AKP to purge Kemalists in the military represented precisely that. Yet had those mass expulsions not taken place, there would not have been the accelerated rise of Gülenists up the ranks of the armed forces, which likely made the attempted coup possible. Respecting laws and rules may lead to slow and imperfect results. But these are more likely to resist the test of time.

Likewise, there can be no lasting solution to Turkey’s current crisis through one man or one party alone. Turkey’s three opposition parties gave a lesson in democracy to all those external observers who were sitting on the fence on the night of July 15. Despite having suffered from Erdoğan’s rule, Turkey’s parliament stood united behind the government. It is now up to the government to seize that olive branch. Without political unity, there cannot be a lasting solution to the crisis. And a protracted political crisis would likely precipitate an economic crisis, harming that socio-economic base that went out on the streets and underpins Erdoğan’s electoral support.

It is our responsibility, as friends of Turkey in Europe and beyond, to support the country in this difficult journey. To do so the first step is a deeper understanding of Turkey’s shades of grey. There is no magic wand to Turkey’s current ills. It is rather a patient effort, by listening, supporting and reminding Turkey that the long term health of its democracy can only be secured through political inclusion and the rule of law.

Nathalie Tocci is Deputy Director of Istituto Affari Internazionali, Editor of The International Spectator and special adviser to HR Federica Mogherini, on behalf of whom she drafted the recent EU Global Strategy. She is extremely widely published and very highly regarded colleague with deep familiarity with Turkey. Her most recent book is "Turkey and the European Union," Palgrave Macmillan, 2015 (co-author).