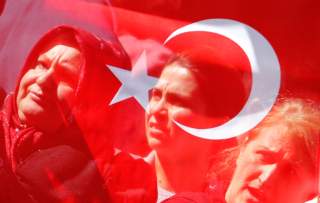 Does one arrest in Istanbul signal a change in Turkish policy toward the Muslim Brotherhood? Some analysts, in Washington and in the Arab world, are arguing that the move marks a pivot away from Turkey’s longtime support of the Brotherhood. If only that were true.

The alleged assassin of Egypt’s attorney general, Mohammed Abdel Wahab,was nabbed at Istanbul airport on January 16 and recently turned over the Egyptian authorities, who had convicted him in absentia and sentenced him to death. Turning over the high-ranking member of the Muslim Brotherhood to face the death penalty in his homeland was once unthinkable. Yet it was done without much public debate. This is the event that got analysts imaging an about-face in Turkish foreign policy.

All this really tells us is that behind-the-scenes pressure from Washington, as well as from Cairo and Riyadh, were intense enough to push Ankara to act. Turkey is still highly dependent on U.S. and Gulf Arab investment and needs American support at the World Bank (soon to be led by a close ally of President Donald Trump), the International Monetary Fund and other global institutions. Finally, Turkey needs U.S.-made spare parts and training for its military.

Besides, the Turkish president faces voters in an upcoming election. His move against a single Muslim Brotherhood member may be designed to aid his party’s reelection efforts, not shift the balance of power in the region. The Brotherhood has become markedly less popular with the Turkish public and Turkish politicians knows this.

As always in Near East, reality has as many layers as baklava, the Turkish dessert.

Relations between the Turkey’s ruling Justice and Development party (known by its Turkish initials, AKP) and the Muslim Brotherhood are long and contradictory. When the AKP, Turkey’s first openly Islamist party to win national elections, came to power in 2002, it was wary of appearing in public with Brotherhood leaders and hewed to a generally pro-American foreign-policy line. After it secured a much bigger majority in the 2007 elections, it publicly embraced the Brotherhood and saw it as a tool to secure a larger role in Middle Eastern affairs. With the Brotherhood, it championed the Palestinian cause—alienating its longtime trading partners in Israel—and favored the Brotherhood’s rise to power in “Arab Spring” Egypt. Turkish leaders were ecstatic when the Brotherhood’s leader was elected in Egypt in 2012 and negotiated twenty-four separate agreements on trade, aid and other matters. Then, a 2013 Egyptian Military establishment uprising toppled the Brotherhood and ultimately led to the landslide election of Gen. Abdel Fattah el-Sisi the following year, supported by a large segment of the population.

Turkey’s displeasure at these developments was well known and it deepened when its ambassador was expelled in 2014. Then, grudgingly, it became to make peace with political realities. Turkey’s foreign minister announced that it would be happy to work with whomever the Egyptian people propelled to power.

Still, few thought the Turks had abandoned the Brotherhood. Indeed, the Turkish premier later dismissively referred to the fairly elected president of Egypt as a “coup leader” during a visit of European Union officials. So, things have not even changed rhetorically.

Ankara, like Teheran, had long supported the Brotherhood to counter the Saudi ideology of Wahhabism, which is a common enemy to both Iran and Turkey. Another important point to remember: The Muslim Brotherhood movement is transnational and its ideology is consistent, or at least does not contradict, Turkish ambitions. It makes a convenient ally.

After el-Sissi’s election in Egypt, Turkey welcomed many exiled Muslim brothers, offering them safe haven in Turkey. Egypt, and other Arab nations, viewed the Turkish sanctuary policy with alarm. Yet Turkey persisted. So, are we facing a radical change in Turkish policy or, simply, a moment of expediency?

If Turkey were actually adopting a new policy at odds with the Brotherhood, it would hunt down its members on its soil and deport them. After all, valid arrest warrants from Turkey’s Arab neighbors exist for most, if not all, of them. Yet the republic has yet to take any such meaningful action.

Meanwhile, the Muslim Brotherhood has begun to distrust its former allies in Ankara. Some now believe that it is active enemy, while others disagree.

Turkey’s foreign policy is best understood as “neo-Ottoman.” It intervenes, to varying degrees, in all regional conflicts. In Syria, it seeks to prevent Kurdish autonomy. In Yemen, it claims a role of political facilitator between Iran and the Gulf Arab states, the two main combatants in that tragic civil war. Turkey’s alliance with its neighbors, Iran and Russia, seeks to counterbalance U.S. and Saudi influence in the Muslim world.

In this magma, its relationship with the Muslim Brotherhood fits the AKP’s world view that considers that the end of the Ottoman caliphate as the main cause of the decline of the Muslim world. Whatever their country of origin, the Muslim brotherhood (which has chapters in every Muslim land) goes beyond nationalism and projects as leaders of all Muslims. Turkey’s military power, its history, and its ruler’s speech are an attractive magnet for Brotherhood support.

For these reasons, in many Arab countries, including Morocco, Muslim Brotherhood intellectuals consider Turkey the a priori favorable. This is a weapon that Erdogan will not let go, despite Western pressure, because it gives the Turkish leader enormous grassroots power across North Africa and Near East.

While nominally a NATO ally of the United States, Turkey has definitely turned its back on membership of the European Union and American foreign-policy objectives. It sees its future as being the regional power player. For this she has to deal with the superpowers, but also with Iran and its Shiite crescent, and the Gulf monarchies and Wahhabi Islam. In this configuration, the cultural and ideological usefulness of the Brotherhood for Turkish goals is the decisive factor. Without the Brotherhood to magnify its power, Turkey cannot be a regional powerbroker. Therefore, it is very difficult to imagine that Ankara abandons an influential movement in the region for seventy years. It would lose much and gain nothing.

One arrested alleged assassin does not change these geopolitical realities.